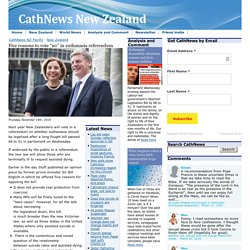 It represents an attack on the family, on the status and dignity of women and on the right to life of New Zealanders in the first nine months of life. Our right to life is universal and inalienable. The denial of{*style:<a href=' more{*style:</a>*} {*style:</li>*}{*style:<li>*} {*style:<h3>*}{*style:<a href=' happens when a virus forces faith communities to go virtual{*style:</a>*}{*style:</h3>*} {*style:<br>*} When two or three are gathered on Facebook, is Christ there? When 10 Jews meet on a Zoom call, is it a minyan?

Protestors say 'No' to Euthanasia Bill. WelCom December 2019 Several hundred protesters against the End of Life Choice Bill gathered outside Parliament on the day of the third and final reading of the bill, 13 November 2019. 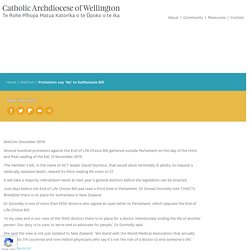 The member’s bill, in the name of ACT leader David Seymour, that would allow terminally ill adults, to request a medically-assisted death, cleared its third reading 69 votes to 51. It will take a majority referendum result at next year’s general election before the legislation can be enacted. Oppose the euthanasia bill - lunchtime gathering at Parliament 13 Nov.

Euthanasia: Exposing the tactics used by the Catholic Church - Noted. RelatedArticlesModule - euthanasia The Catholic hierarchy tries to use submissions on assisted dying as a de facto referendum. 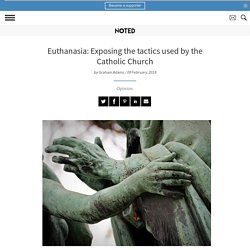 Poll after poll on assisted dying — no matter which research organisation runs it — shows the same result: a massive majority in favour of changing the law. In the latest poll by Newshub Reid Research released on February 3, once again more than 70 per cent of respondents were in favour of reform. Only 19.5 per cent were opposed. This echoes the Horizon poll in June 2017 (75-11); and the One News Colmar-Brunton poll in July (74-18 in favour). If you go back to 2015 when Lecretia Seales was making headlines for her legal case in the High Court, the results were similar: Reid Research (71-24 in favour); Colmar Brunton (75-21).

Pacific People say NO to the End of Life Choice Bill. Issues With Euthanasia & Assisted Suicide – ProLife NZ. The term euthanasia (derived from the Greek for good death) has come to mean the deliberate killing of sick or disabled persons for supposedly merciful reasons or mercy killing. 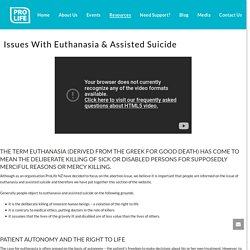 Although as an organisation ProLife NZ have decided to focus on the abortion issue, we believe it is important that people are informed on the issue of euthanasia and assisted suicide and therefore we have put together this section of the website. Generally people object to euthanasia and assisted suicide on the following grounds. it is the deliberate killing of innocent human beings – a violation of the right to lifeit is contrary to medical ethics, putting doctors in the role of killersit assumes that the lives of the gravely ill and disabled are of less value than the lives of others.

In their submission to the Justice Select Committee on David Seymour's End of Life Choice Bill this week, the bishops recommended no change to existing laws, and called for more funding of palliative care and counselling support for patients and their whanau. Better end of life care and psycho-social support Rather than introducing assisted dying as proposed in the Bill, the bishops believe our government should ensure New Zealanders have access to the best quality palliative and psycho-social care when faced with terminal illness.

They cite Australian doctor Karen Hitchcock who in her 12 years of work in large public hospitals has often heard patients express a wish to die, but says the cause of that desire is seldom physical pain, One bishop's view from the bedside "But the matter of intention makes a big difference. Assisted dying's risk of coercion. Euthanasia In the second of five articles analysing public submissions on the proposed euthanasia law, Jeremy Rees examines worries about families coercing people to end their lives. 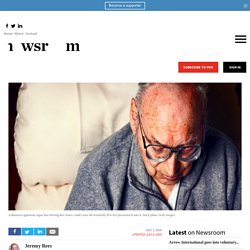 Would families pressure a loved one suffering a terminal disease into taking their lives if euthanasia becomes legal? “I believe that this law change will be putting vulnerable patients at risk,” Auckland GP, Gisa George says. “I am worried about the strain this would put on our elderly. Often the elderly feel isolated and vulnerable. It is one of the most commonly expressed worries and most vexing questions among the submissions to Parliament Justice select committee on David Seymour’s End of Life Choice Bill. NZ Catholic bishops' letter to all parishioners on the 'End of Life Choice Bill' which seeks to legalise euthanasia and assisted suicide - Catholic Diocese of Auckland.

23 January 2018 Dear Parishioners, As many of you will know, in December 2017, David Seymour’s ‘End of Life Choice’ bill had its first reading in Parliament and was voted through to the Justice Select Committee. 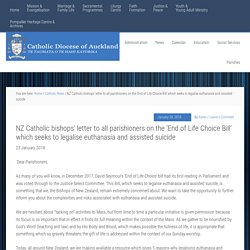 This Bill, which seeks to legalise euthanasia and assisted suicide, is something that we, the Bishops of New Zealand, remain extremely concerned about. We want to take the opportunity to further inform you about the complexities and risks associated with euthanasia and assisted suicide. We are hesitant about “tacking on” activities to Mass, but from time to time a particular initiative is given permission because its focus is so important that in effect it finds its full meaning within the context of the Mass.

Today, all around New Zealand, we are making available a resource which gives 5 reasons why legalising euthanasia and assisted suicide would be dangerous. Thank you for giving this your attention and for the support and effort you have all given to date on this issue. No to Assisted Suicide in New Zealand. Euthanasia-Free NZ: Supporting care and compassion within the limits of the present law. My wife reversed her Do Not Resuscitate order - I can't support euthanasia. It is likely New Zealanders will be asked to vote in the next three years in a referendum on assisted suicide, or the End of Life Choice Bill. 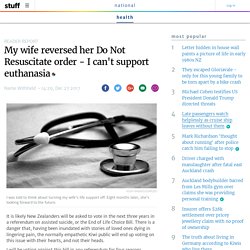 There is a danger that, having been inundated with stories of loved ones dying in lingering pain, the normally empathetic Kiwi public will end up voting on this issue with their hearts, and not their heads. I will be voting against this bill in any referendum for four reasons. 1. People change their minds. Should Kiwis have the right to die with 'dignity'? Share your stories, photos and videos. Contribute About four years ago my wife was diagnosed with a non-cancerous lung disease. READ MORE: * Euthanasia debate * Why can't I have the option of assisted dying? Given only a 50/50 chance of recovery on admission, she was asked if she wanted to be resuscitated in the event of death.

For five days she was in a critical condition that could have gone either way. 2. In early 2017 my wife received a double lung transplant. 3. Www.hospice.org.nz/about-hospice-nz/euthanasia-our-opinion. Hospice NZ Position Statement on Euthanasia and Assisted Dying Palliative care, as defined by the World Health Organisation, “intends neither to hasten nor postpone death”. 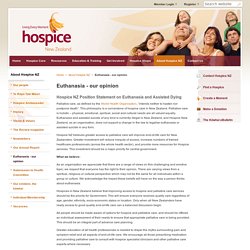 This philosophy is a cornerstone of hospice care in New Zealand. Palliative care is holistic – physical, emotional, spiritual, social and cultural needs are all valued equally. Hospices say no to euthanasia. JULY 9, 2018 Updated July 9, 2018 Jeremy Rees Jeremy Rees is a journalist and former editor at Stuff and NZME, with a special interest in China and New Zealand-China links. 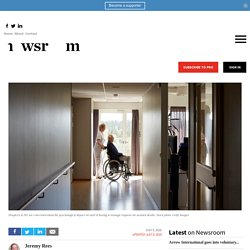