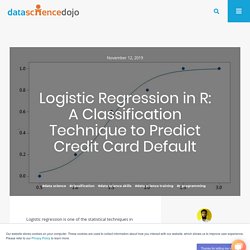 It is one of the most popular classification algorithms mostly used for binary classification problems (problems with two class values, however, some variants may deal with multiple classes as well). It's used for various research and industrial problems. Therefore, it is essential to have a good grasp on logistic regression algorithm. This tutorial is a sneak peek from many of Data Science Dojo’s hands-on exercises from their 5-day data science bootcamp, you will learn how logistic regression fits a dataset to make predictions, as well as when and why to use it.

In short, Logistic Regression is used when the dependent variable(target) is categorical. To predict whether an email is spam (1) or not spam (0)Whether the tumor is malignant (1) or not (0) How to Perform Ordinal Logistic Regression in R – R-posts.com. In this article, we discuss the basics of ordinal logistic regression and its implementation in R. 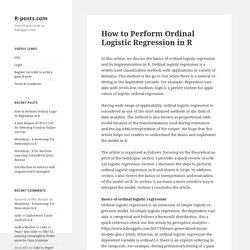 Ordinal logistic regression is a widely used classification method, with applications in variety of domains. This method is the go-to tool when there is a natural ordering in the dependent variable. For example, dependent variable with levels low, medium, high is a perfect context for application of logistic ordinal regression. Having wide range of applicability, ordinal logistic regression is considered as one of the most admired methods in the field of data analytics.

The method is also known as proportional odds model because of the transformations used during estimation and the log odds interpretation of the output. The article is organized as follows: focusing on the theoretical aspects of the technique, section 1 provides a quick review of ordinal logistic regression. Confidence intervals for GLMs. You've estimated a GLM or a related model (GLMM, GAM, etc.) for your latest paper and, like a good researcher, you want to visualise the model and show the uncertainty in it. 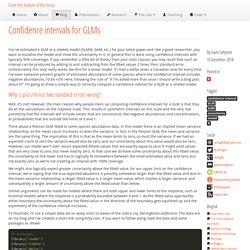 In general this is done using confidence intervals with typically 95% converage. If you remember a little bit of theory from your stats classes, you may recall that such an interval can be produced by adding to and subtracting from the fitted values 2 times their standard error. Unfortunately this only really works like this for a linear model. If I had a dollar (even a Canadian one) for every time I've seen someone present graphs of estimated abundance of some species where the confidence interval includes negative abundances, I'd be rich! Here, following the rule of "if I'm asked more than once I should write a blog post about it!

" Finalfit: Getting started. The finafit package brings together the day-to-day functions we use to generate final results tables and plots when modelling. 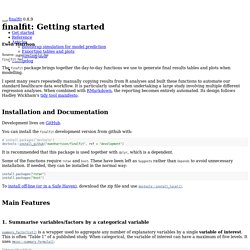 I spent many years repeatedly manually copying results from R analyses and built these functions to automate our standard healthcare data workflow. It is particularly useful when undertaking a large study involving multiple different regression analyses. When combined with RMarkdown, the reporting becomes entirely automated. Its design follows Hadley Wickham’s tidy tool manifesto. Installation and Documentation. 5 Alternatives to the Default R Outputs for GLMs and Linear Models. How to build a logistic regression model from scratch in R - Open Source Automation. In a previous post, we showed how using vectorization in R can vastly speed up fuzzy matching. 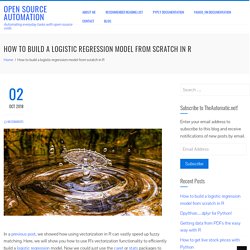 Here, we will show you how to use R’s vectorization functionality to efficiently build a logistic regression model. Now we could just use the caret or stats packages to create a model, but building algorithms from scratch is a great way to develop a better understanding of how they work under the hood. In writing the logistic regression algorithm from scratch, we will consider the following definitions and assumptions: x = A dxn matrix of d predictor variables, where each column xi represents the vector of predictors corresponding to one data point (with n such columns i.e. n data points) An introduction to cutpointr ( ROC )

Cutpointr is an R package for tidy calculation of “optimal” cutpoints. 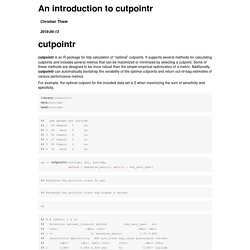 It supports several methods for calculating cutpoints and includes several metrics that can be maximized or minimized by selecting a cutpoint. Some of these methods are designed to be more robust than the simple empirical optimization of a metric. Additionally, cutpointr can automatically bootstrap the variability of the optimal cutpoints and return out-of-bag estimates of various performance metrics. For example, the optimal cutpoint for the included data set is 2 when maximizing the sum of sensitivity and specificity. 30 Questions to test your understanding of Logistic Regression. ROC Curves in Two Lines of R Code. By Bob Horton, Microsoft Data Scientist ROC curves are commonly used to characterize the sensitivity/specificity tradeoffs for a binary classifier. 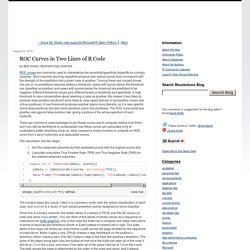 Different threshold values give different levels of sensitivity and specificity. A high threshold is more conservative about labelling a case as positive; this makes it less likely to produce false positive results but more likely to miss cases that are in fact positive (lower rate of true positives). The calculation has two steps: Logistic Regression Tutorial for Machine Learning. Logistic regression is one of the most popular machine learning algorithms for binary classification. 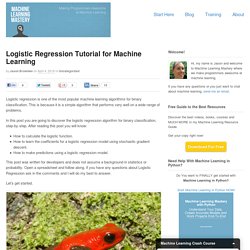 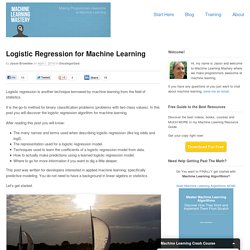 It is the go-to method for binary classification problems (problems with two class values). In this post you will discover the logistic regression algorithm for machine learning. After reading this post you will know: The many names and terms used when describing logistic regression (like log odds and logit).The representation used for a logistic regression model.Techniques used to learn the coefficients of a logistic regression model from data.How to actually make predictions using a learned logistic regression model.Where to go for more information if you want to dig a little deeper. This post was written for developers interested in applied machine learning, specifically predictive modeling. Let’s get started. Logistic Regression with R - Listen Data. #Read Data File mydata <- read.csv(" #Summary summary(mydata) #Cross Tab xtabs(~admit + rank, data = mydata) #Data Preparation mydata$rank <- factor(mydata$rank) # Split data into training (70%) and validation (30%) dt = sort(sample(nrow(mydata), nrow(mydata)*.7)) 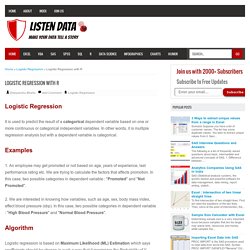 How to use Multinomial and Ordinal Logistic Regression in R ? Introduction Most of us have limited knowledge of regression. Of which, linear and logistic regression are our favorite ones. As an interesting fact, regression has extended capabilities to deal with different types of variables. Prediction Intervals for Poisson Regression. Different from the confidence interval that is to address the uncertainty related to the conditional mean, the prediction interval is to accommodate the additional uncertainty associated with prediction errors. As a result, the prediction interval is always wider than the confidence interval in a regression model.

In the context of risk modeling, the prediction interval is often used to address the potential model risk due to aforementioned uncertainties. While calculating prediction interval of OLS regression based on the Gaussian distributional assumption is relatively straightforward with the off-shelf solution in R, it could be more complicated in a Generalized Linear Model, e.g. InformationValue - r-statistics.co.

The evaluation process involves the assessment of three distinct areas – goodness of fit, tests of individual predictors, and validation of predicted values – in order to produce the most useful model. While the following content isn’t exhaustive, it should provide a compact ‘cheat sheet’ and guide for the modeling process. Evaluating Logistic Regression Models in R. Logistic Regression Fundamentals « GormAnalysis. Evaluating Logistic Regression Models. Logistic regression is a technique that is well suited for examining the relationship between a categorical response variable and one or more categorical or continuous predictor variables. The model is generally presented in the following format, where β refers to the parameters and x represents the independent variables.

Hence, it will neither predict negative sales, nor infinite sales. However, I didn't review any residual plots or anything else but the mean predictions. Generalised Linear Models in R. Linear models are the bread and butter of statistics, but there is a lot more to it than taking a ruler and drawing a line through a couple of points. Some time ago Rasmus Bååth published an insightful blog article about how such models could be described from a distribution centric point of view, instead of the classic error terms convention.

I think the distribution centric view makes generalised linear models (GLM) much easier to understand as well. More on Prediction From Log-Linear Regressions. Example 2014.7: Simulate logistic regression with an interaction.