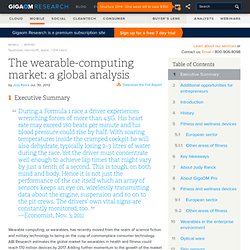 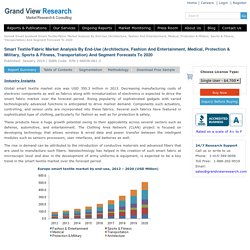 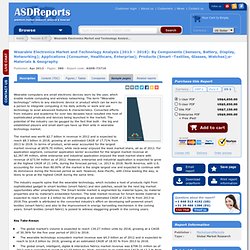 The term “Wearable technology” refers to any electronic device or product which can be worn by a person to integrate computing in his daily activity or work and use technology to avail advanced features & characteristics. Concerted efforts from industry and academia for over two decades have resulted into host of sophisticated products and devices being launched in the market. The potential of the industry can be gauged by the fact that both - the big and established players and small start-ups have up their ante in wearable technology market.

The market was worth $2.7 billion in revenue in 2012 and is expected to reach $8.3 billion in 2018, growing at an estimated CAGR of 17.71% from 2013 to 2018. In terms of product, wrist-wear accounted for the largest market revenue at $876.70 million, while neck-wear enjoyed the least market share, all as of 2012. Rapid growth in wearable electronics and e-textiles is projected. An overview of wearables markets shows the variety of products available and in development. 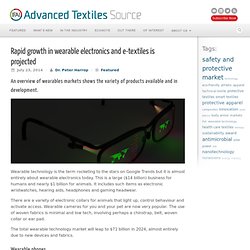 Wearable technology is the term rocketing to the stars on Google Trends but it is almost entirely about wearable electronics today. This is a large ($14 billion) business for humans and nearly $1 billion for animals. It includes such items as electronic wristwatches, hearing aids, headphones and gaming headwear. There are a variety of electronic collars for animals that light up, control behaviour and activate access.

How Wearable Technology Will Impact Digital Marketing. You may have heard of the term ‘wearable technology.’ 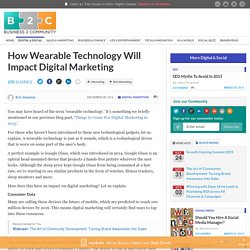 It’s something we briefly mentioned in our previous blog post, ‘Things to Come For Digital Marketing in 2015.’ For those who haven’t been introduced to these new technological gadgets, let us explain. A wearable technology is just as it sounds, which is a technological device that is worn on some part of the user’s body. A perfect example is Google Glass, which was introduced in 2014.

Forget smartwatches - smartclothes are the future, analysts say. The popularity of fitness-tracking wristbands will wane in the next 12 months, according to market analysts, as consumers opt instead for more versatile smartwatches and new smartclothing. 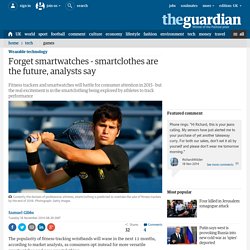 Currently the domain of professional athletes, smart clothing will overtake the sale of fitness trackers by the end of 2016 as consumer products become available. 10 Smart Clothes You&#039;ll Be Wearing Soon. In the emerging Internet of Things, everyday objects are becoming networked. 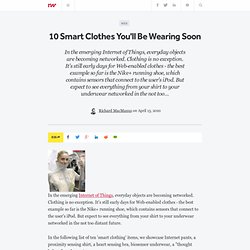 Clothing is no exception. It's still early days for Web-enabled clothes - the best example so far is the Nike+ running shoe, which contains sensors that connect to the user's iPod. But expect to see everything from your shirt to your underwear networked in the not too distant future. ‘Smart clothes’ for personalized cooling and heating. Garment-based printable electrodes (credit: UC San Diego) Instead of heating or cooling your whole house, imagine a fabric that will keep your body at a comfortable temperature — regardless of how hot or cold it actually is. 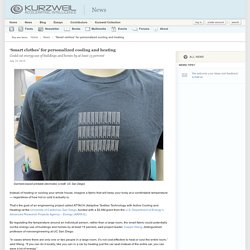 That’s the goal of an engineering project called ATTACH (Adaptive Textiles Technology with Active Cooling and Heating) at the University of California, San Diego, funded with a $2.6M grant from the U.S. Department of Energy’s Advanced Research Projects Agency – Energy (ARPA-E). By regulating the temperature around an individual person, rather than a large room, the smart fabric could potentially cut the energy use of buildings and homes by at least 15 percent, said project leader Joseph Wang, distinguished professor of nanoengineering at UC San Diego. Next-generation clothing monitors your heart, tracks your posture and gives you a hug. Wearable electronics like headphones and watches have long been a common inclusion in many an active person's tech cache. 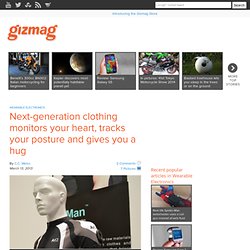 Such devices roll the function of electronics into a comfortable, ergonomic package that can travel far distances at fast speeds. The Shirt that Uses Piezoelectric Power to Charge Your Phone. The Sound Charge t-shirt uses external sound to generate an electric charge. 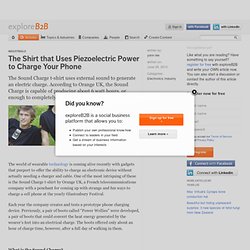 According to Orange UK, the Sound Charge is capable of producing about 6 watt hours, or enough to completely charge two mobile phones. The world of wearable technology is coming alive recently with gadgets that purport to offer the ability to charge an electronic device without actually needing a charger and cable. One of the most intriquing of these is the Sound Charge t-shirt by Orange UK, a French telecommunications company with a penchant for coming up with strange and fun ways to charge a cell phone at the yearly Glastonbury Festival. Each year the company creates and tests a prototype phone charging device.