Amniotomy for shortening spontaneous labour. Study Finds Brain Changes in Newborns Exposed to Antidepressants. A first of its kind neuroscience study, published this month in Cerebral Cortex, found changes in the brain electrical activity of infants exposed to SSRI antidepressants during pregnancy. 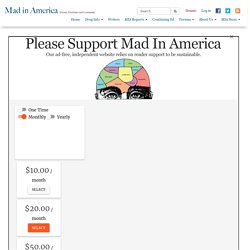 The changes are associated with less-organized communication between the brain’s hemispheres and are comparable to the effects found in previous animal studies. The researchers call for more critical evaluations of the prescription of antidepressants during pregnancy and suggest that non-pharmacologic and therapeutic alternatives should be the preferred treatment. "If the mother using an SRI plans a pregnancy, it would be advisable to consider a close follow-up or a therapeutic intervention without SRI medication,” Outi Mantere, a psychiatrist associated with the study said in a press release. “Recent experience with group therapy has shown promise in treating depression or anxiety during pregnancy, with effects that extend to the wellbeing of both mother and baby. " Cervical dilation is (now mathematically shown to be) unpredictable – sarawickham. I realise that this will not come as a shock to most people who read my blog and that many people don’t need research to confirm their experiences, but I think it is important to share the findings of studies which add weight to traditional knowledge and/or progress our thinking about everyday areas, and it is in that vein that I share the following news. 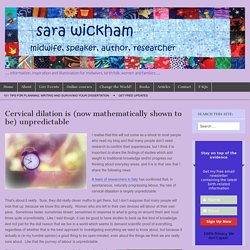 A team of researchers in Italy has confirmed that, in spontaneous, naturally progressing labour, the rate of cervical dilatation is largely unpredictable. Folic Acid for the Prevention of Colorectal Adenomas:  A Randomized Clinical Trial. Corresponding Author: Bernard F. 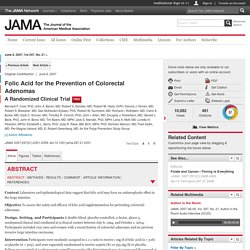 Folic acid supplementation in pregnancy and implications in health and disease. Introduction The emerging view of epidemiological studies indicates the importance of the intrauterine environment in early fetal development. 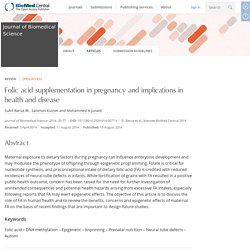 With increased understanding of the fundamental mechanism, appropriate DNA methylation including the proper functioning of the epigenetic machinery is highlighted to be essential for embryogenesis and adult health [1]-[3]. Thus, FA has gained considerable attention because of its promising role in modulating diverse clinical conditions, whereas folate deficiency has been linked with a variety of disorders including birth defects and defects in the development of neural tube closure [4]-[6]. As stated by Hippocrates nearly 2,500 years ago: “Let food be thy medicine and medicine be thy food” the mandatory FA fortification appears to be a first modern attempt to design a strategy for using food for the prevention or treatment of developmental defects. Folic acid supplementation during pregnancy for maternal health and pregnancy outcomes. Be Careful About Iron Supplementation in Pregnancy. This is a question that comes up a lot in pregnancy. . .”What kind of iron supplements should I be taking? 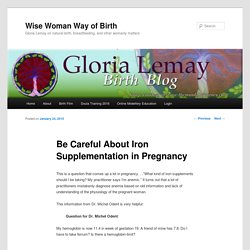 My practitioner says I’m anemic.” It turns out that a lot of practitioners mistakenly diagnose anemia based on old information and lack of understanding of the physiology of the pregnant woman. Pregnant women must be told risks of birth at hospital, NICE says. Expectant mothers should be told the risks of giving birth at their nearest hospital or midwife centre or at home, the health watchdog has said. 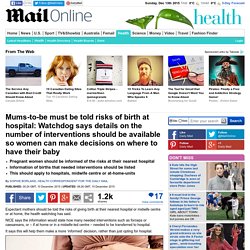 NICE says the information would state how many needed interventions such as forceps or caesareans, or – if at home or in a midwife-led centre – needed to be transferred to hospital. It says this will help them make a more ‘informed’ decision, rather than just opting for hospital. 50 Human Studies Identify High Risks of Prenatal Ultrasound. The practice of ultrasound during pregnancy is highly controversial with authorities acknowledging that there are clear hazards as found in animal and cell studies. 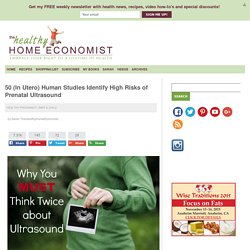 Nevertheless, the routine practice continues with multiple scans encouraged in most prenatal settings even with low risk pregnancies because ultrasound hazards have supposedly not been confirmed by human studies. In addition, Western medical authorities claim that there isn’t a single official case of ultrasound damage. The Catch-22 is that human studies on the effects of ultrasound in the United States and other Western nations are discouraged and virtually banned because such research is considered unethical. Moreover, funding on the safety of ultrasound screening on the fetus virtually stopped since 1991, when, strangely enough, the FDA raised the limit for machine ultrasound intensity levels by a factor of eight. Childhood cancer, intramuscular vitamin K, and pethidine given during labour. Baby’s Cells Can Manipulate Mom’s Body for Decades. Comparing the odds of postpartum haemorrhage in planned home birth against planned hospital birth: results of an observational study of over 500,000 maternities in the UK. 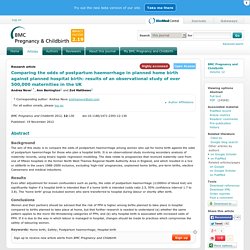 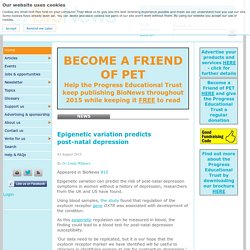 Using blood samples, the study found that regulation of the oxytocin receptor gene OXTR was associated with development of the condition. As this epigenetic regulation can be measured in blood, the finding could lead to a blood test for post-natal depression susceptibility. 'Our data need to be replicated, but it is our hope that the oxytocin receptor marker we have identified will be useful to clinicians in identifying women at risk for postpartum depression,' said first author Dr Aleeca Bell of the University of Illinois, Chicago.

The researchers used blood samples and psychological data on 500 women to determine the association between an OXTR variant, the level of OXTR methylation, and post-natal depression. The little known difference between folate and folic acid. Molecular mechanisms within fetal lungs initiate labor. Researchers at UT Southwestern Medical Center have identified two proteins in a fetus' lungs responsible for initiating the labor process, providing potential new targets for preventing preterm birth. 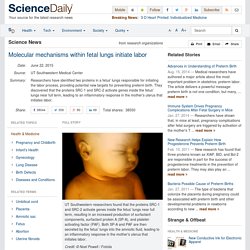 Previous studies have suggested that signals from the fetus initiate the birth process, but the precise molecular mechanisms that lead to labor remained unclear. UT Southwestern biochemists studying mouse models found that the two proteins − steroid receptor coactivators 1 and 2 (SRC-1 and SRC-2) -- control genes for pulmonary surfactant components that promote the initiation of labor. Surfactant is a substance released from the fetus' lungs just prior to birth that is essential for normal breathing outside the womb.

"By understanding the factors and pathways that initiate normal-term labor at 40 weeks, we can gain more insight into how to prevent preterm labor," said Dr. Better fine motor skills with delayed cord clamping. The importance of the umbilical cord not only for the fetus but for newborn infants too was shown by Swedish researchers several years ago, in a study that received great international acclaim. In a follow-up study in the journal JAMA Pediatrics they have now been able to show an association between delayed cord clamping (DCC) and children's fine motor skills at the age of four years, especially in boys. Several years ago, in a clinical study comprising 400 newborns, Dr Ola Andersson and colleagues demonstrated that the risk of iron deficiency at the age of four months was considerably lower in infants whose umbilical cords were clamped and cut three minutes after birth ('delayed cord clamping', DCC) than in those whose cords were removed within ten seconds ('early cord clamping', ECC).

The newborns in the study were well-nourished babies born after full-term pregnancies to healthy mothers. Spontaneous delivery is related to barometric pressure. Creative Child Parenting Ideas Child's Birthday. Love-bombing my children on their birthdays has become a favorite family tradition. My husband remembers with fondness how each year when he was growing up, the birthday child would wake up to getting his or her nose buttered by the rest of the family.

I remember the joy of feeling celebrated when my parents smothered the house in balloons and decorations. The memories you provide your birthday boy or girl now will bring smiles for a lifetime. Here are 15 ways to give joy to your child on that special day. Caesarean sections should only be done out of medical necessity, WHO says. Caesarean sections should only be carried out when medically necessary, according to the World Health Organisation, which says the surgical procedure can put the health of women and their babies at risk. The WHO reiterates the view of its health experts, who have said since 1985 that the “ideal rate” for caesarean sections is between 10% and 15% of births. Caesareans save lives for example when women are in obstructed labour or their babies are in distress. Stand and Deliver: Michel Odent on GD. "Gestational Diabetes: A Diagnosis Still Looking For a Disease?

" Primal Health Research: A New Era in Health Research Published quarterly by Primal Health Research Centre Charity No.328090 72, Savernake Road London NW3 2JR Summer 2004 Vol. 12 No.1. Giving the Tdap During Pregnancy Associated with Increased Chorioamnionitis (infection) The JAMA article “Evaluation of the association of maternal pertussis vaccination with obstetric events and birth outcomes,” November 2014 was conducted to see if the new practice of injecting pregnant moms with the Tdap has any negative outcomes. (You can read this here… ) Since this vaccine contains a very large dose of aluminum, the adverse effects I would expect to see would likely show up after infancy. Hopefully they will continue to follow these children and see if they are neurologically harmed by this neurotoxin exposure during critical brain development periods in the womb. Sadly, the Tdap is now routinely recommended during every pregnancy in the USA. Prenatal Exposure to Chemicals Tied to Lower IQ at Age 7.

Giant study links C-sections with chronic disorders. An increasing number of women in the Westenr world have had to have their babies delivered by Caesarian section. According to a new study, these babies face a greater risk of developing immunological disorders compared to children born naturally. 5.6.13chemicalexposures.pdf. Maternal nutrition at conception modulates DNA methylation of human metastable epialleles : Nature Communications.

Prenatal and perinatal analgesic exposure and autism: an ecological link. The Silent {but insanely powerful} Impact Hormones During Pregnancy Have On Helping You & Your Baby at Birth. -with Dr. Sarah Buckley. Dr. Helping baby engage in labor - Spinning Babies. A baby can not get through the pelvis if the baby can't get into the pelvis. Lack of engagement is a common issue for the woman who labors but the baby remains high in the pelvis. Length of pregnancy can vary by up to five weeks, scientists discover - Science - News. Although it has always been known that human pregnancies usually last between 37 and 42 weeks, the variation has previously been attributed to imperfect methods of estimating due dates. A woman's due date is calculated as 280 days after the onset of her last menstruation and is only ever considered a best guess.

Preparing Your Pelvis for Labor! Most women spend countless hours preparing for the arrival of their little one. Probiotics during pregnancy and breast- - PubMed Mobile. Alcohol Research & Health, Volume 34, Number 1. FOCUS ON: Epigenetics And Fetal Alcohol Spectrum Disorders. If you have MTHFR, put DOWN that glass of wine! Alcohol Research & Health, Volume 34, Number 1. Vitamin A, folate, and choline as a pos - PubMed Mobile. Should My Newborn Get A Vitamin K Shot?The Mommypotamus. This post may contain affiliate links to products I use and recommend.

Gestational diabetes. Group B Strep in Pregnancy: Evidence for Antibiotics and Alternatives « Evidence Based Birth. A World of Safety Nets. The Process - Sacred  Severance. Mothering. Chris Kresser » Natural childbirth VI: Pitocin side effects and risks. How to… perform a stretch and sweep. The Lie of the EDD: Why Your Due Date Isn't when You Think - Yahoo! Voices Mobile. Cesarean section & delayed clamping « Delayed Cord Clamping. Low Amniotic Fluid. . . I don’t think so. Breastfeeding and Sleeping Arrangements - Science and History in Parenting. What You Don't Know About Episiotomies Can Hurt You. Doppler Danger's Ultrasound List. Humanrightsinchildbirth.com.