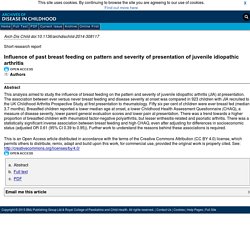 The association between ever versus never breast feeding and disease severity at onset was compared in 923 children with JIA recruited to the UK Childhood Arthritis Prospective Study at first presentation to rheumatology. Breastmilk-Saliva Interactions Boost Innate Immunity by Regulating the Oral Microbiome in Early Infancy. Abstract Introduction Xanthine oxidase (XO) is distributed in mammals largely in the liver and small intestine, but also is highly active in milk where it generates hydrogen peroxide (H2O2). 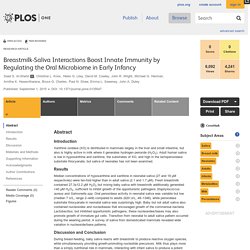 Adult human saliva is low in hypoxanthine and xanthine, the substrates of XO, and high in the lactoperoxidase substrate thiocyanate, but saliva of neonates has not been examined. Results. [GUEST POST] Breastmilk: it’s liquid gold! By Bronwyn Balcomb (IBCLC, BSc Diet, Post Grad Diploma in Dietetics UKZN) What is so amazing about breast milk? 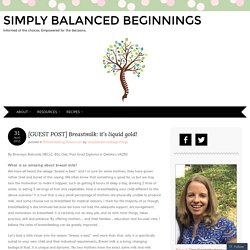 We have all heard the adage “breast is best” and I’m sure for some mothers, they have grown rather tired and bored of this saying. We often know that something is good for us but we may lack the motivation to make it happen; such as getting 8 hours of sleep a day, drinking 2 litres of water, or eating 5 servings of fruit and vegetables. How is breastfeeding your child different to the above scenario?

It is true that a very small percentage of mothers are physically unable to produce milk, and some choose not to breastfeed for medical reasons. Let’s look a little closer into the reason “breast is best” and more than that, why it is specifically suited to your own child and their individual requirements. Milk vs. formula… under the microscope. We just got a digital camera attachment for our microscope, so what do you think I photographed first? 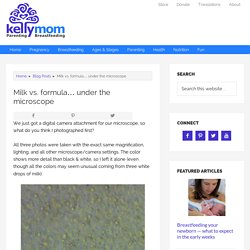 All three photos were taken with the exact same magnification, lighting, and all other microscope/camera settings. The color shows more detail than black & white, so I left it alone (even though all the colors may seem unusual coming from three white drops of milk). The Alpha Parent: Why the way you feed your baby is MY business. “My baby, my choice”. 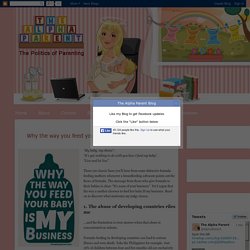 “It’s got nothing to do with you how I feed my baby”. “Live and let live”. Analytical Armadillo: Message For Expectant/New Parents. Impending parenthood provokes a different response in each of us, and often a combination of emotions: anxiety, sheer panic, confidence, uncertainty, excitement, happiness to name just a few. 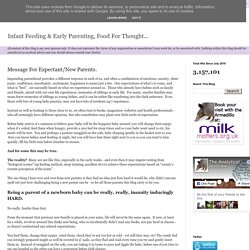 Our expectations of what's to come, and what is "best", are naturally based on what we experience around us. Those who already have babies such as family and friends, mixed with our own life experiences, memories of siblings or early life. For many, smaller families may mean fewer memories of siblings as young babies, and it can be rather like wandering into the dark unknown. Even those with lots of young baby practice, may not have lots of newborn 24/7 experience.

Breast-Feeding May Cut Breast Cancer Recurrence Risk. A new report suggests that breast-feeding, which has been associated with a reduced breast cancer risk, may have another benefit. 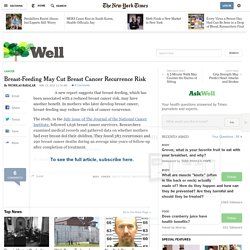 When unexplained breastfeeding pain is an indicator of tongue and lip ties. I sat there with a new mother holding in my tears as she shared her story. 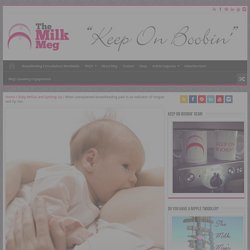 Here she was with her 8 week old newborn, sitting on the couch wondering what to do next. The truth about formula saving babies’ lives. ABOUT 830,000 newborn babies would be saved every year if they had just one hour at their mother’s breast before being separated from her. 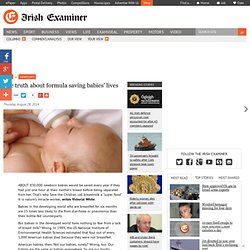 That’s why Save the Children call breastmilk a "super-food". It is nature’s miracle-worker, writes Victorial White. Babies in the developing world who are breastfed for six months are 15 times less likely to die from diarrhoea or pneumonia than their bottle-fed counterparts. But babies in the developed world have nothing to fear from a lack of breast milk? Wrong. American babies, then. Breast vs. Vaccine. Exclusive breast-feeding cuts diarrhea in Brazil by 90%… VERSUS 40% cut by vaccination in Mexico. 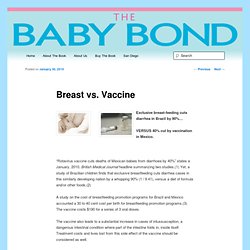 “Rotavirus vaccine cuts deaths of Mexican babies from diarrhoea by 40%” states a January, 2010, British Medical Journal headline summarizing two studies.(1) Yet, a study of Brazilian children finds that exclusive breastfeeding cuts diarrhea cases in this similarly developing nation by a whopping 90% (1 / 9.41), versus a diet of formula and/or other foods.(2) A study on the cost of breastfeeding promotion programs for Brazil and Mexico accounted a 30 to 40 cent cost per birth for breastfeeding promotion programs.(3) The vaccine costs $190 for a series of 3 oral doses.

The vaccine also leads to a substantial increase in cases of intussusception, a dangerous intestinal condition where part of the intestine folds in, inside itself. Treatment costs and lives lost from this side effect of the vaccine should be considered as well. Probiotic found in breast milk helps alleviate symptoms of digestive disorders.

Here's another reason to breast feed your baby: Canadian researchers have discovered how a probiotic found in breastmilk reduces or eliminates painful cramping in the gut. In a new research report published online in the FASEB Journal these scientists use mice to show that a specific strain of Lactobacillus reuteri decreases the force of muscle contractions in the gut within minutes of exposure. This bacterium naturally occurs in the gut of many mammals and can be found in human breast milk. This discovery suggests that increasing the intake of this bacterium may help alleviate symptoms of a wide range of gut disorders, such as irritable bowel syndrome, inflammatory bowel disease, functional bowel disorders, and constipation.

To make this discovery, Kunze and colleagues, introduced Lactobacillus reuteri into isolated pieces of small intestine taken from healthy and previously untreated mice. How to Fortify Breastmilk for a Sick Baby. I received this question back when we were discussing fevers. "What are things a breastfeeding mom can do when her baby is sick?

" We can probably think of several things to do TO our babies when they are sick. Mammals Suck... Milk!: Terrible "Reporting" by the Daily Mail. How Breast Milk Engineers a Baby’s Gut (and Gut Microbes) Raising an infant is an act of ecosystem engineering. You’re not just caring for a baby, but an entire world. Right from birth, babies are colonised by legions of microbes that set up shop in their guts, skin, and more. These are vital. They help the growing human to digest its food, and to keep harmful microbes away. They are so important that newborns temporarily suppress their own immune system to give their microbial partners a chance to establish themselves. Mum helps too.

Mother’s Milk, How to Increase Your Supply. By Cheryl Taylor, CBE When in the course of a happy breastfeeding relationship you notice a supply change, it can cause momentary panic. The first course of action should be to assess a few basic things. Are you resting enough? Breastfeeding Benefits To Mother And Baby - Honolulu Early Childhood Parenting. Alcohol content of breast milk. Abstract/Introduction:All nursing mothers worry about how their food and drink affect their child. One big concern is alcoholic beverages. New study reveals important role of insulin in making breast milk. The High Cost Of Low Breastfeeding Rates. A new cost analysis of the long-term impacts of breastfeeding found that lower-than-recommended breastfeeding rates among U.S. mothers “may cause as many as 5,000 cases of breast cancer, nearly 54,000 cases of hypertension, and almost 14,000 heart attacks each year.”

The study, led by a researcher at Harvard Medical School and published today in the journal Obstetrics & Gynecology also found that the economic toll associated with such “sub-optimal” breastfeeding practices reaches into the billions annually. The study’s lead author, Melissa Bartick, M.D., an assistant professor of internal medicine at Harvard Medical School and an internist at Cambridge Health Alliance says via email that the bottom line of the analysis is this: “Women need to be supported to be able to breastfeed each child for at least a year — their health, and our economy depend on it.” MRI study: Breastfeeding boosts babies' brain growth. June 6, 2013 — A study using brain images from "quiet" MRI machines adds to the growing body of evidence that breastfeeding improves brain development in infants.

Mind the Science Gap » The Beauty of Breast Milk (and Its Ability to Keep Allergies at Bay) Most people see the beauty of nature in pristine white sand beaches, the serenity of the forest, the first crocus buds popping out of the ground, etc. For me, (a self-proclaimed science nerd) there is nothing more beautiful about nature than a complex biological mechanism that imparts health. Babies At Risk Of Obesity Due To Parents Overfeeding.

If your infant is clinically obese at 24 months, it could be due to overeating early on, a new study shows. Follow us "If you are overweight at age two, it puts you on a trajectory where you are likely to be overweight into middle childhood and adolescence and as an adult," said Renata Forste, co-author and sociology professor at Brigham Young University. Breast milk Saves Infant from Infection. Breast-Milk Protein May Help Defeat Antibiotic-Resistant Bacteria. The hidden cause of feeding problems? (however you feed your baby) - milk matters. It’s not always obvious, the tongue can look ENTIRELY normal to the untrained eye… Sometimes it’s pulled into a heart shape or the attachment may be visible on the tip of the tongue? But this is just one type, others may be missed by many health professionals, yet a hidden cause of serious breastfeeding problems.

Consultant Paediatrician in Surrey, South East England. Phone 07564 184 010. 5 Places Where Breastfeeding is Certainly Inappropriate... Exactly when and where is it okay to breastfeed your infant? This question has been on the minds of concerned Americans lately as mothers continue to recklessly feed their hungry babies when and where they want without asking anyone’s permission first. Breast Infection Begone! 20 Incredible Facts About Breast Milk. Goat’s Milk? Really??? A Response to WAPF’s Claim that Homemade Formula is Better Than Breast Milk. There is (still) too much aluminium in infant formulas. Miracle Milk® Helps Heal Brain Injured, Formula-Fed Baby.

BFNExpressing&Storing. Milkstorage01. Don't Shake the Breastmilk. Hand Expression - Newborn Nursery at LPCH - Stanford University School of Medicine. In vitro study finds digested formula, but not breast milk, is toxic to cells. The Alpha Parent: Why the way you feed your baby is MY business.