Angles in parallel lines- corresponding angles. Vertically opposite angles. Perpendicular Lines. Right Angles. Angles on a Straight Line 2. Angles on a Straight Line (1) Angles Around a Point: Lesson. Drawing Angles - Less Than 90 Degrees. Angles Formed by a Transversal Worksheets. Angle Relationship: Interior and Exterior Find the angle relationship between each pair of angles. 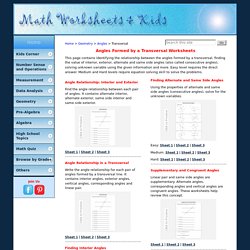 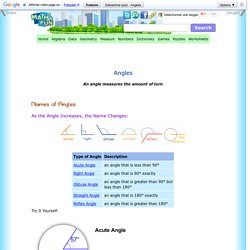 Be Careful What You Measure Positive and Negative Angles When measuring from a line: a positive angle goes counterclockwise (opposite direction that clocks go) a negative angle goes clockwise Example: −67° Parts of an Angle The corner point of an angle is called the vertex And the two straight sides are called arms The angle is the amount of turn between each arm. Math Antics - Angle Basics. TYPES OF ANGLES SEUSS SONG by Heath. IXL - Acute, right, obtuse and straight angles (Year 5 maths practice) Math Antics - Triangles. Measuring angles with a protractor. Types of Angles Introduction.

Degrees as a unit of angle measure. Degrees Definition: A measure of an angle. 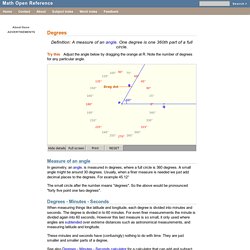 One degree is one 360th part of a full circle. Try this Adjust the angle below by dragging the orange at R. Note the number of degrees for any particular angle. Measure of an angle In geometry, an angle. is measured in degrees, where a full circle is 360 degrees. The small circle after the number means "degrees". Degrees - Minutes - Seconds When measuring things like latitude and longitude, each degree is divided into minutes and seconds. These minutes and seconds have (confusingly) nothing to do with time. See also Degrees - Minutes - Seconds calculator for a calculator that can add and subract angles in this form. When minutes and seconds are used alone, we usually say "arc minutes" and "arc seconds" to avoid confusion with time units.

Which direction to measure? In the figure above, adjust the point R so the line crosses the point marked 315°. They both are, but by convention the smaller one is assumed. Angles you should know Other measures General. Degrees (Angles) We can measure Angles in Degrees. 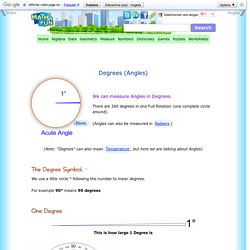 There are 360 degrees in one Full Rotation (one complete circle around). (Angles can also be measured in Radians) (Note: "Degrees" can also mean Temperature, but here we are talking about Angles) The Degree Symbol: ° We use a little circle ° following the number to mean degrees. For example 90° means 90 degrees One Degree This is how large 1 Degree is The Full Circle A Full Circle is 360° What Are Angles?