What is Tectonic Shift? The Earth is in a constant state of change. 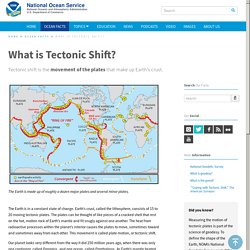 Earth’s crust, called the lithosphere, consists of 15 to 20 moving tectonic plates. The plates can be thought of like pieces of a cracked shell that rest on the hot, molten rock of Earth’s mantle and fit snugly against one another. The heat from radioactive processes within the planet’s interior causes the plates to move, sometimes toward and sometimes away from each other. This movement is called plate motion, or tectonic shift.

Our planet looks very different from the way it did 250 million years ago, when there was only one continent, called Pangaea, and one ocean, called Panthalassa. The huge continent eventually broke apart, creating new and ever-changing land masses and oceans. Earth’s land masses move toward and away from each other at an average rate of about 0.6 inch a year. The Geosphere - Layers of the Earth - Science for Kids. Convection. Mantle Convection & Plates (Article) Why are earthquakes so hard to predict? - Jean-Baptiste P. Koehl. The Science of Earthquakes. A normal (dip-slip) fault is an inclined fracture where the rock mass above an inclined fault moves down (Public domain.) 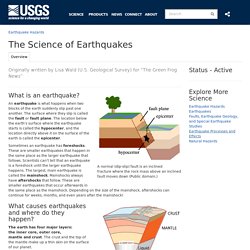 What is an earthquake? An earthquake is what happens when two blocks of the earth suddenly slip past one another. The surface where they slip is called the fault or fault plane. National Geographic. 100 Greatest Discoveries. Structure of the Earth. Layers Of The Earth: What Lies Beneath Earth's Crust. The layers of Earth provide geologists and geophysicists clues to how Earth formed, the layers that make up other planetary bodies, the source of Earth's resources, and much more. 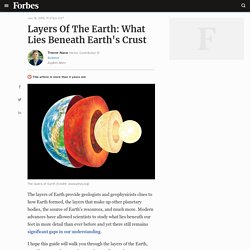 Modern advances have allowed scientists to study what lies beneath our feet in more detail than ever before and yet there still remains significant gaps in our understanding. I hope this guide will walk you through the layers of the Earth, provide a general sense of our understanding and our current gaps. Keep in mind that this is an area of ongoing research and is likely to become more refined in the coming years and decades.

During my second year at Edinburgh [1826-27] I attended Jameson's lectures on Geology and Zoology, but they were incredible dull. The sole effect they produced on me was the determination never as long as I lived to read a book on Geology. - Charles Darwin. Plate tectonics. National Geographic Society. In much the same way that geographic borders have separated, collided, and been redrawn throughout human history, tectonic plate boundaries have diverged, converged, and reshaped the Earth throughout its geologic history. 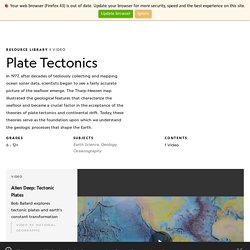 Today, science has shown that the surface of the Earth is in a constant state of change. We are able to observe and measure mountains rising and eroding, oceans expanding and shrinking, volcanoes erupting and earthquakes striking. Before the Tharp-Heezen map of the seafloor was published in 1977, scientists had little understanding of the geological features that characterized the seafloor, especially on a global scale. What is the mid-ocean ridge?: Ocean Exploration Facts: NOAA Office of Ocean Exploration and Research. The nearly continuous, global mid-ocean ridge system snakes across the Earth’s surface like the seams on a baseball. 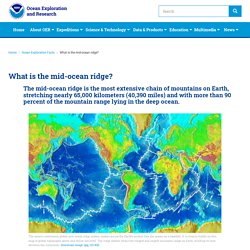 It is clearly visible on this map of global topography above and below sea level. The ridge system forms the longest and largest mountain range on Earth, winding its way between the continents. Download image (jpg, 123 KB). The massive mid-ocean ridge system is a continuous range of underwater volcanoes that wraps around the globe like seams on a baseball, stretching nearly 65,000 kilometers (40,390 miles). Landforms, Hey!: Crash Course Kids #17.1. National Geographic (Article) A rift valley is a lowland region that forms where Earth’s tectonic plates move apart, or rift. 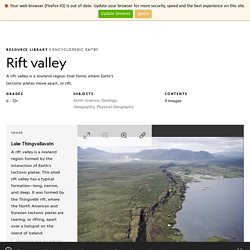 Rift valleys are found both on land and at the bottom of the ocean, where they are created by the process of seafloor spreading. Rift valleys differ from river valleys and glacial valleys in that they are created by tectonic activity and not the process of erosion. Tectonic plates are huge, rocky slabs of Earth's lithosphere—its crust and upper mantle. Tectonic plates are constantly in motion—shifting against each other in fault zones, falling beneath one another in a process called subduction, crashing against one another at convergent plate boundaries, and tearing apart from each other at divergent plate boundaries. Many rift valleys are part of “triple junctions,” a type of divergent boundary where three tectonic plates meet at about 120° angles. Rift valleys can also form at transform faults, where tectonic plates are grinding past each other. Mid-Ocean Ridges Continental Rift Valleys.

What is Continental Rifting?