Microsoft totters from time machine clutching Windows 10 Workstation. This is not one of the leaked slides... 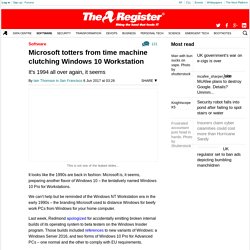 Windows 10 one year later: The Anniversary Update. Last year's Windows 10 release was unlike any Windows release I've ever used before, and I've used most of them. 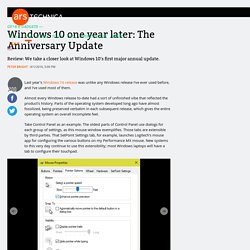 Almost every Windows release to-date had a sort of unfinished vibe that reflected the product's history. Parts of the operating system developed long ago have almost fossilized, being preserved verbatim in each subsequent release, which gives the entire operating system an overall incomplete feel. Take Control Panel as an example. The oldest parts of Control Panel use dialogs for each group of settings, as this mouse window exemplifies. Those tabs are extensible by third parties. While this dialog has been massaged and slightly updated over the years, it is taking a form that is more than 20 years old—it debuted with Windows 95. A new approach to settings was introduced in Windows XP, with the control panels directly embedded into an Explorer Window. How to launch Windows Explorer with the privileges of a different domain user?

Windows 8. Windows 10. Why Does Windows Have Terrible Battery Life? Windows XP patches flow for free if you flick PCs into POS mode. A German notice-board has published instructions on how to keep getting the free Windows XP updates that enterprises are having to pay for. 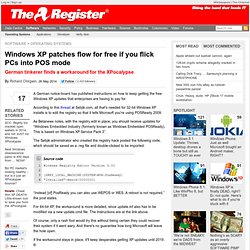 According to this thread at Sebjik.com, all that's needed for 32-bit Windows XP installs is to edit the registry so that it tells Microsoft you're using POSReady 2009. As Betanews notes, with the registry edit in place, you should receive updates for “Windows Embedded Industry (formerly known as Windows Embedded POSReady).

This is based on Windows XP Service Pack 3”. The Sebjik administrator who created the registry hack posted the following code, which should be saved as a .reg file and double-clicked to be imported: “Instead [of] PosReady you can also use WEPOS or WES. For 64-bit XP, the workaround is more detailed, since update.inf also has to be modified via a new update.cmd file. Of course, only a rash fool would try this without being certain they could recover their system if it went awry. Windows 9 To Win Over Windows 7 Users, Disables Start Screen For Desktop. How to save your SharePoint password in Windows.

A poster asked me a wonderful question: “How do I get Access [linked to SharePoint] to remember my login credentials so I don’t have to login everytime?” 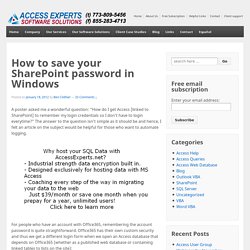 The answer to the question isn’t simple as it should be and hence, I felt an article on the subject would be helpful for those who want to automate logging. For people who have an account with Office365, remembering the account password is quite straightforward. Office365 has their own custom security and thus we get a different login form when we open an Access database that depends on Office365 (whether as a published web database or containing linked tables to lists on the site): As you can see on the screenshot, you can simply check the checkboxes, “Remember Me” and “Keep me signed in” if you don’t want to get prompted for password again. Simple! Great! When you’re using a SharePoint server that is maybe hosted somewhere else or on your network, and SharePoint is using its default setting, you’ll see a login like this: 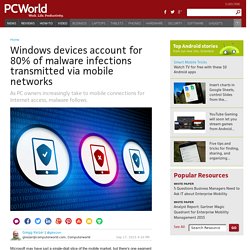 According to a Wednesday report from Alcatel-Lucent’s Motive Security Lab, in June Windows devices accounted for 80% of the infections spotted on hardware that relied on mobile networks for Internet connectivity. Meanwhile, Android’s share of the total infection count dropped to about 20% after long hovering at the 50% mark. iOS and other operating systems were at nearly negligible percentages. The data was generated from scans by Alcatel-Lucent’s Motive Security Guardian technology, which is deployed worldwide by both mobile and fixed-line networks, and monitors traffic from more than 100 million devices.

That Windows malware infections represented such a huge portion of the total when Microsoft’s operating system has been a very minor player in mobile is certainly counter-intuitive. Simple. Alcatel-Lucent. No escape: Microsoft injects 'Get Windows 10' nagware into biz PCs. Microsoft's relentless campaign to push Windows 10 onto every PC on the planet knows no bounds: now business desktops will be nagged to upgrade. 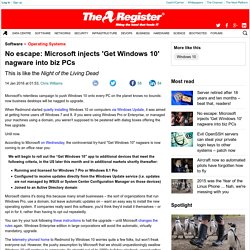 When Redmond started quietly installing Windows 10 on computers via Windows Update, it was aimed at getting home users off Windows 7 and 8. If you were using Windows Pro or Enterprise, or managed your machines using a domain, you weren't supposed to be pestered with dialog boxes offering the free upgrade. Until now. According to Microsoft on Wednesday, the controversial try-hard "Get Windows 10" nagware is now coming to an office near you: Microsoft claims it's doing this because many small businesses – the sort of organizations that run Windows Pro, use a domain, but leave automatic updates on – want an easy way to install the new operating system. You can try your luck following these instructions to halt the upgrade – until Microsoft changes the rules again. 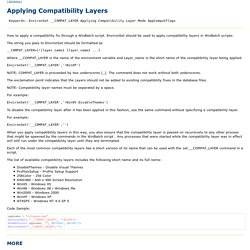