Institute for Mathematics and Computer Science. Computational Thinking. In our conversations with Scratchers, we heard young designers describe evolving understandings of themselves, their relationships to others, and the technological world around them. 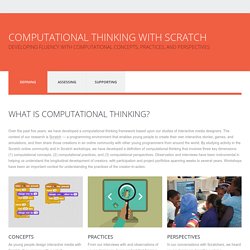 This was a surprising and fascinating dimension of participation with Scratch — a dimension not captured by our framing of concepts and practices. As the final step in articulating our computational thinking framework, we added the dimension of perspectives to describe the shifts in perspective that we observed in young people working with Scratch, which included three elements: expressing: realizing that computation is a medium of creation, "I can create. " connecting: recognizing the power of creating with and for others, "I can do different things when I have access to others. " questioning: feeling empowered to ask questions about the world, "I can (use computation to) ask questions to make sense of (computational things in) the world. " Siegel Family Endowment. March 2011 computational thinking ll386. 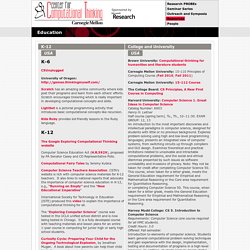 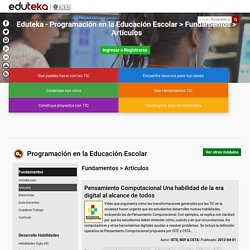 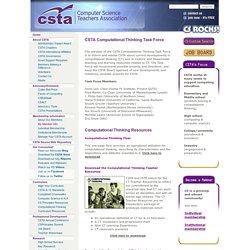 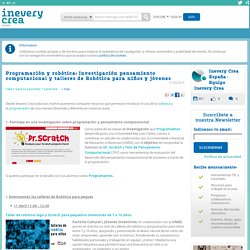 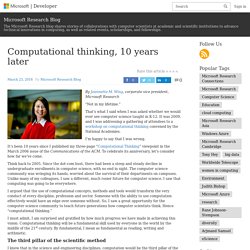 Wing, corporate vice president, Microsoft Research “Not in my lifetime.” That’s what I said when I was asked whether we would ever see computer science taught in K-12. It was 2009, and I was addressing a gathering of attendees to a workshop on computational thinking convened by the National Academies. I’m happy to say that I was wrong. It’s been 10 years since I published my three-page “Computational Thinking” viewpoint in the March 2006 issue of the Communications of the ACM. Think back to 2005. Wing06. Want to Solve Problems More Efficiently? Do This. From Mark Zuckerberg to will.i.am, it seems that everyone has championed the importance of learning code. 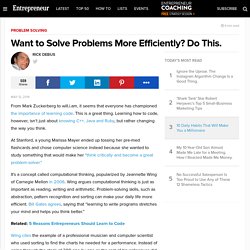 This is a great thing. Learning how to code, however, isn’t just about knowing C++, Java and Ruby, but rather changing the way you think. 5 Reasons Entrepreneurs Should Learn to Code. Join us live at Entrepreneur's Accelerate Your Business event series in Chicago or Denver. 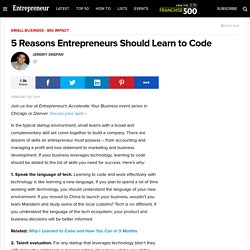 Secure your spot » In the typical startup environment, small teams with a broad and complementary skill set come together to build a company. There are dozens of skills an entrepreneur must possess -- from accounting and managing a profit and loss statement to marketing and business development. If your business leverages technology, learning to code should be added to the list of skills you need for success. Here's why: 1. Computational Thinking: How To Get It, and Why It’s Important. Wednesday, August 27, 2014 A group of children on a playground, each kid clutching a slip of paper with a number on it, moves along a line drawn in chalk, comparing numbers as they go and sorting themselves into ascending order from one to ten. 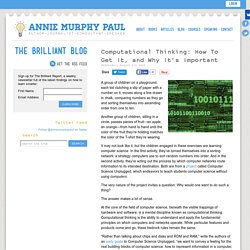 Another group of children, sitting in a circle, passes pieces of fruit—an apple, an orange—from hand to hand until the color of the fruit they’re holding matches the color of the T-shirt they’re wearing. It may not look like it, but the children engaged in these exercises are learning computer science. In the first activity, they’ve turned themselves into a sorting network: a strategy computers use to sort random numbers into order. And in the second activity, they’re acting out the process by which computer networks route information to its intended destination. The benefits of computational thinking. 471.11CTLeadershiptToolkit SP vF.