Polly-Klaas. All about Polly Klaas and Richard Allen Davis — Profile of Polly. Polly Hannah Klaas was born on January 3, 1981 in Fairfax, Cal., to Marc and Eve Klaas. 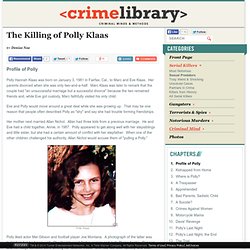 Her parents divorced when she was only two-and-a-half. Marc Klaas was later to remark that the couple had "an unsuccessful marriage but a successful divorce" because the two remained friends and, while Eve got custody, Marc faithfully visited his only child. Eve and Polly would move around a great deal while she was growing up. That may be one reason that people often described Polly as "shy" and say she had trouble forming friendships.

Her mother next married Allan Nichol. Polly Klaas Polly liked actor Mel Gibson and football player Joe Montana. Although often withdrawn, Polly had a dramatic streak. She had a good sense of humor and enjoyed dressing up like an old lady and hobbling about with a cane, which she would use to suddenly whack someone on the behind. Marc Klaas, Polly's father She was close to her paternal grandparents, Joe and B.J. Polly Klaas Foundation - Home. Polly Klaas Foundation. The Polly Klaas Foundation also provides kits for parents to teach abduction prevention in a way that they state is not scary for kids.[2] It distributes over 100,000 of these kits per year[3] The Polly Klaas Foundation worked with Convio to send targeted letters to stand and federal officials to implement Amber Alerts in all 50 states. 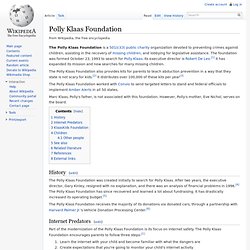 KlaasKids Foundation[edit] The KlaasKids Foundation was founded in 1994 in order to help prevent crimes against children. Children[edit] Other people[edit] Michelle Le, nursing student. See also[edit] Polly Klaas Foundation - Polly's Story. Polly's Abduction Twelve-year-old Polly Hannah Klaas was having a slumber party when a strange man holding a knife entered her bedroom, tied up all the girls and put pillow cases over their heads. 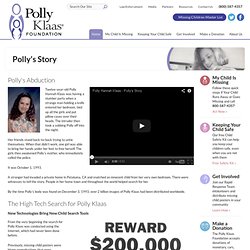 The intruder then took a sobbing Polly off into the night. Her friends stood back-to-back trying to untie themselves. When that didn't work, one girl was able to bring her hands under her feet to free herself. The girls then awakened Polly's mother, who immediately called the police. It was October 1, 1993. A stranger had invaded a private home in Petaluma, CA and snatched an innocent child from her very own bedroom. By the time Polly's body was found on December 3, 1993, over 2 billion images of Polly Klaas had been distributed worldwide. Murder of Polly Klaas. Polly Hannah Klaas (January 3, 1981 – October 1, 1993) was an American murder victim whose case gained national attention. 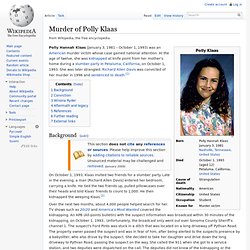 At the age of twelve, she was kidnapped at knife point from her mother's home during a slumber party in Petaluma, California, on October 1, 1993. She was later strangled. Richard Allen Davis was convicted of her murder in 1996 and sentenced to death.[1] Background[edit] On October 1, 1993, Klaas invited two friends for a slumber party. The deputies called for a tow truck to get the suspect's car out of the ditch.

Since the events of October 1, the Sheriff's radio system has been upgraded, and APB's are now broadcast on all channels through a centralized 911 dispatch system. On November 28, 1993, the property owner was inspecting her property after loggers had partially cleared the property of trees. While Davis was being interrogated by Petaluma PD and the FBI, a massive search was launched on Friday, December 3. Conviction[edit] Winona Ryder[edit] Polly Klaas' Dad: 'Everything Changed' After Daughter's Death.