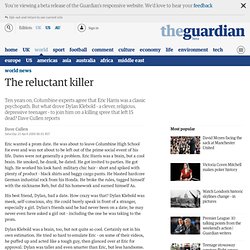 He was about to leave Columbine High School for ever and was not about to be left out of the prime social event of his life. Dates were not generally a problem. Eric Harris was a brain, but a cool brain. He smoked, he drank, he dated. He got invited to parties. Dylan Klebold Journal and Other Writings. "Columbine Online: Dylan Klebold's Journal—Share a decade of Dave Cullen's research on the Columbine killers. Unlike Eric's this was a traditional journal, where Dylan worked through private hopes and fears, long before he dreamed of murder. 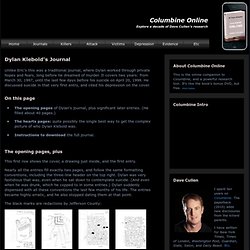 It covers two years: from March 30, 1997, until the last few days before his suicide on April 20, 1999. He discussed suicide in that very first entry, and cited his depression on the cover. On this page The opening pages of Dylan's journal, plus significant later entries. (He filled about 40 pages.) Dylan Klebold. One of a pair of shooters at a highschool in Colorado. 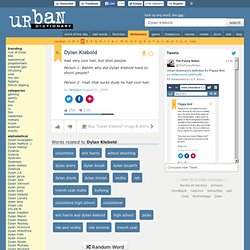 He and his pal Dylan Klebold showed up at school late on April 20, 1999, when they arrived they planted propane bombs in the cafeteria, by the soda machines. The had the bombs set to go off at 1:17. afterward they went to the hill to watch the mayhem persue, ready to pick off the people who ran out of the building with their guns. They also had a bomb set in the car that they arrived in. when the times for the bombs to go off arrived, neither did. If the bombs had gone off, the death toll would have been in the hundreds.

As the approached the building, readying themselves for the task at hand, they took OFF their trench coats and pulled out their weapons (ill say which later) as the events occured 15 people died that day. 14 students and one teacher. 2 of the students were of course themselves, which they killed themselves in the liabrary. The events spawned a game called SCMRPG! Dylan Klebold News. Anatomy of a Murder-Suicide By ANDREW SOLOMON If we want to stem violence, we need to begin by stemming despair. 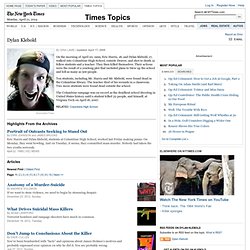 December 23, 2012, Sunday Don’t Jump to Conclusions About the Killer. Dylan klebold. Dylan Klebold: Mother of Columbine massacre shooter wanted son to commit suicide. By Daily Mail Reporter Published: 21:14 GMT, 17 November 2012 | Updated: 14:02 GMT, 18 November 2012 The mother of one of Columbine High School massacre gunman Dylan Klebold admitted that she prayed that her son would kill himself - a wish she has regretted many times since. 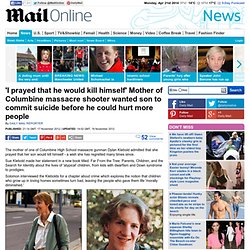 Sue Klebold made her statement in a new book titled: Far From the Tree: Parents, Children, and the Search for Identity about the lives of 'atypical' children, from kids with dwarfism and Down syndrome to prodigies. Solomon interviewed the Klebolds for a chapter about crime which explores the notion that children who grow up in loving homes sometimes turn bad, leaving the people who gave them life 'morally diminished.' 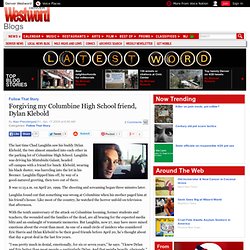 Laughlin was driving his Mistubishi Galant, headed off-campus with a friend for lunch. Klebold, wearing his black duster, was barreling into the lot in his Beemer. Laughlin flipped him off, by way of a good-natured greeting, then tore out of there. It was 11:15 a.m. on April 20, 1999. The shooting and screaming began three minutes later. Laughlin found out that something was wrong at Columbine when his mother paged him at his friend's house. 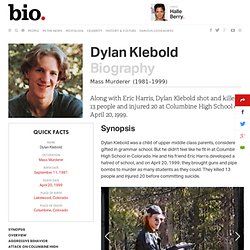 Synopsis Dylan Klebold was a child of upper middle class parents, considered gifted in grammar school. But he didn't feel like he fit in at Columbine High School in Colorado. He and his friend Eric Harris developed a hatred of school, and on April 20, 1999, they brought guns and pipe bombs to murder as many students as they could. They killed 13 people and injured 20 before committing suicide. Overview. Dylan klebold. Eric Harris and Dylan Klebold - Criminal Minds Wiki. Eric David Harris and Dylan Bennet Klebold were a pair of school shooters responsible for the April 20th, 1999 Columbine High School massacre. 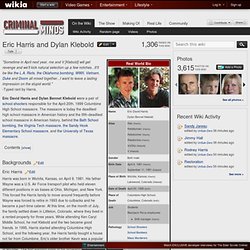 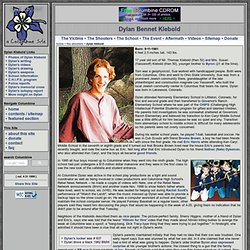 Thomas Klebold (then 52) and Mrs. Susan (Yassenoff) Klebold (then 50), younger brother to Byron (21 at the time). Tom was a geophysicist, Sue worked with handicapped people. Both were from Columbus, Ohio and went to Ohio State University. Pictures of Dylan Klebold through the years. Before Dylan Klebold was a Columbine shooter he was a kid, just like hundreds of thousands others. 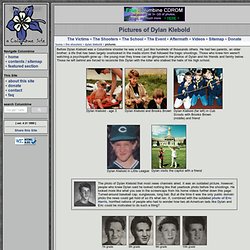 He had two parents, an older brother; a life that has been largely overlooked in the media storm that followed the tragic shootings. Those who knew him weren't watching a psychopath grow up - the young man they knew can be glimpsed in the photos of Dylan and his friends and family below. Eric Harris and Dylan Klebold. Eric David Harris (April 9, 1981 – April 20, 1999) and Dylan Bennet Klebold (September 11, 1981 – April 20, 1999) were the two American high school seniors who committed the Columbine High School massacre.

The pair killed 13 people and injured 24 others, three of whom were injured as they escaped the attack.[1][2] The two then committed suicide in the library, where they had killed 10 of their victims.[3] The Denver Post Online - Columbine - Tragedy and Recovery. Columbine - tragedy and recovery Life and death of a follower By Kevin Simpson, Patricia Callahan and Peggy LoweDenver Post Staff Writers May 2 - As Columbine High School convulsed with explosions and gunfire, Chris Hooker scrambled from the mayhem and ran straight into a contradiction. Safely away from the building, the 18-year-old senior waded into a dragnet of reporters seeking names to flesh out early reports that the gunmen might belong to a clique of outcasts called the Trench Coat Mafia.

He rattled off several students, including a tall, quiet kid with an interest in computers, a knack for math and a passion for baseball. Dylan Klebold. As a reporter scribbled, Hooker reconsidered. "You'd better cross Dylan's name off," he said. How did he get there? Harris left a chilling trail of vitriolic Internet rants, plans for a military career doomed by psychiatric concerns and a diary that calculated revenge against a world that made his life miserable.