Why India is increasing its UK investments. Image copyright Oli Scarff When it comes to Indian investment in the UK, among the most high profile is Tata Motors' ownership of carmaker Jaguar Land Rover. 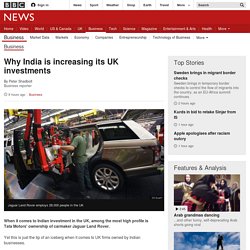 Yet this is just the tip of an iceberg when it comes to UK firms owned by Indian businesses. The visit to the UK by Indian Prime Minister Narendra Modi, which starts on Thursday, comes at a time when India is emerging as perhaps the strongest player among the so-called Bric nations - Brazil, Russia, India and China. While the Brazilian, Chinese and Russian economies are all showing signs of slowing, India is booming. Shielded from China's slowdown thanks to its huge domestic market, India's economy is growing at a rate of 7% per year, putting it neck and neck with the Chinese.

And some of that Indian growth is finding new markets in the UK. According to a report earlier this year from government department UK Trade & Investment (UKTI), India is now the third-largest source of foreign direct investment into the UK. Lidl has received almost $1bn in public development funding. The German discount supermarket Lidl and its sister chain Kaufland have benefited from almost $900m (£576m) in public development money over the past decade, the Guardian can reveal. 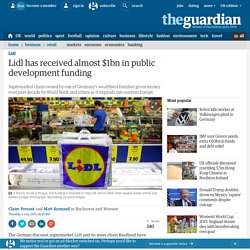 The companies, owned by the large retail company Schwarz Group and controlled by one of Germany’s wealthiest families, received loan funding from a little-known wing of the World Bank and from the European Bank for Reconstruction and Development (EBRD). These public institutions, funded by taxpayers and owned by governments, have explicit mandates to increase local development in the countries where they spend their money. The World Bank also has an additional, specific mandate to reduce global poverty. Queen 'could move out of Buckingham Palace' - BBC News. The Queen may have to move out of Buckingham Palace to allow maintenance work costing £150m to be carried out. 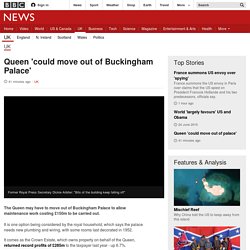 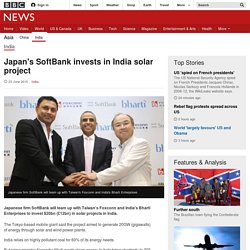 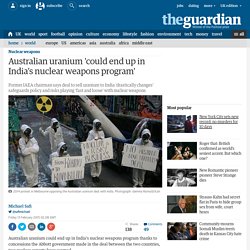 A former Australian diplomat and chairman of the International Atomic Energy Agency (IAEA), Ronald Walker, said the agreement to sell uranium to India “drastically changes longstanding policy” on safeguards and risked playing “fast and loose” with nuclear weapons. Australia and China seal major free trade deal. 17 November 2014Last updated at 03:04 ET Tony Abbott: "It open the doors to Australia and it opens the doors to China" China and Australia have sealed a major free trade agreement, as Chinese President Xi Jinping made a rare address to parliament in Canberra. 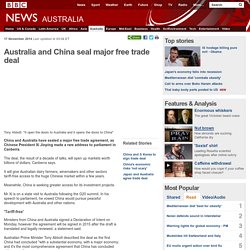 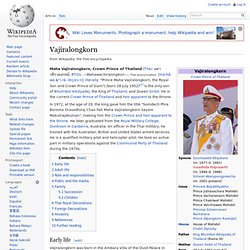 He is the current Crown Prince of Thailand and heir apparent to the throne. In 1972, at the age of 20, the king gave him the title "Somdech Phra Boroma Orasadhiraj Chao Fah Maha Vajiralongkorn Sayam Makutrajakuman", making him the Crown Prince and heir-apparent to the throne. He later graduated from the Royal Military College, Duntroon in Canberra, Australia. An officer in the Thai military, he trained with the Australian, British and United States armed services. He is a qualified military pilot and helicopter pilot. Early life[edit] Bhumibol Adulyadej. Bhumibol Adulyadej (Thai: ภูมิพลอดุลยเดช; RTGS: Phumiphon Adunyadet; pronounced [pʰuːmípʰōn ʔàdūnjādèːt] ( King Bhumibol is respected[2][3] and revered by many Thais.[4] The King is legally considered "inviolable", and lèse majesté, that is, offence against the dignity of the monarch may be punished.[4] In 1957, the overthrow of the government was justified with allegations of lèse majesté.[5][6] Although Bhumibol invited public criticism in a 2005 speech,[7] politicians and individuals are still being arrested, though most are pardoned. 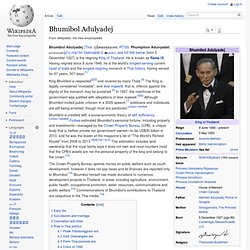 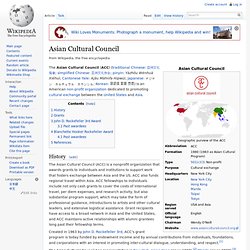 History[edit] The Asian Cultural Council (ACC) is a nonprofit organization that awards grants to individuals and institutions to support work that fosters exchange between Asia and the US. ACC also funds regional travel within Asia. The Great Exhibition. The enormous Crystal Palace went from plans to grand opening in just nine months. 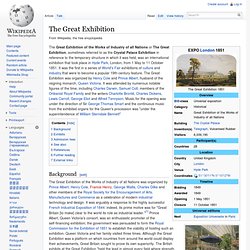