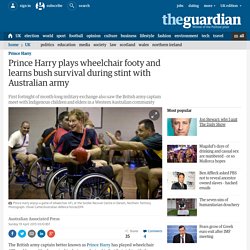 The 30-year-old veteran of two Afghanistan deployments is on a month-long military exchange to Australia. His schedule in the Northern Territory with the 1st Brigade has included flight simulation training, riding in an armed reconnaissance helicopter (Tiger), physical training and preparing for field exercises. But it hasn’t been all work and no play for the prince. After meeting with wounded and injured Australian soldiers he joined a game of wheelchair footy. Earlier, while on duty with the North-West Mobile Force he got a lesson in bush survival and sourcing food and water, camping out two nights in the remote Kununurra region in Western Australia. 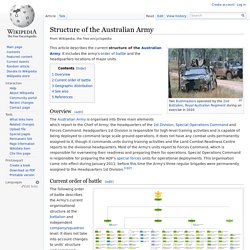 It includes the army's order of battle and the headquarters locations of major units. Overview[edit] Current order of battle[edit] The Australian Army's structure in 2012 Geographic distribution[edit] LAND 400 and the future of Army. While high profile Defence projects like the Joint Strike Fighter and future submarine have received plenty of coverage, much less has been written about LAND 400—a proposed $10 billion purchase of armoured land combat vehicles for Army. 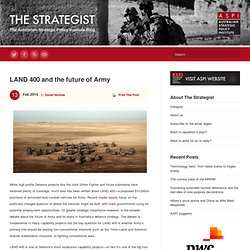 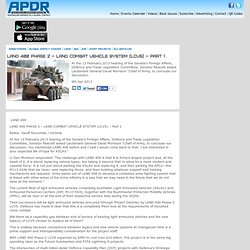 You mentioned LAND 400 before and I said I would come back to that. I am interested in your expected life of type for ASLAV.” Lt Gen Morrison responded “The challenge with LAND 400 is that it is Army's largest project and, at the heart of it, it is about replacing vehicle types, but taking it beyond that to allow for a more modern and capable force. Project LAND 400. Army’s core business is the conduct of sustained close combat. 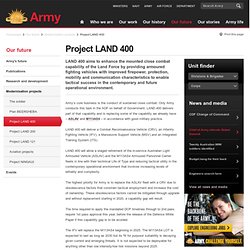 Only Army conducts this task in the ADF on behalf of Government. LAND 400 delivers part of that capability and is replacing some of the capability we already have – ASLAV and M113AS4 – in accordance with good military practice. Fort Queenscliff. Coordinates: The first Allied shots of World War I were fired when a gun at Fort Nepean fired across the bow of the German freighter Pfalz, as she was attempting to escape to sea.[1] The orders to fire came from Fort Queenscliff. 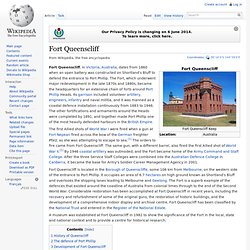 The same gun, with a different barrel, also fired the first Allied shot of World War II.[1] By 1946 coastal artillery was outmoded, and the Fort became home of the Army Command and Staff College. After the three Service Staff Colleges were combined into the Australian Defence College in Canberra, it became the base for Army's Soldier Career Management Agency in 2001. Fort Queenscliff is located in the Borough of Queenscliffe, some 106 km from Melbourne, on the western side of the entrance to Port Phillip. It occupies an area of 6.7 hectares on high ground known as Shortland's Bluff and overlooks the shipping lanes leading to Melbourne and Geelong. M72 LAW. The M72 LAW (Light Anti-Tank Weapon, also referred to as the Light Anti-Armor Weapon or LAW as well as LAWS Light Anti-Armor Weapons System) is a portable one-shot 66 mm unguided anti-tank weapon. 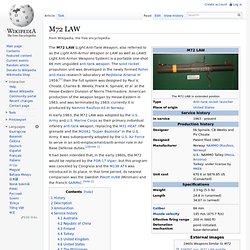 The solid rocket propulsion unit was developed in the newly formed Rohm and Haas research laboratory at Redstone Arsenal in 1959,[1] then the full system was designed by Paul V. Choate, Charles B. Weeks, Frank A. Spinale, et al. at the Hesse-Eastern Division of Norris Thermadore. American production of the weapon began by Hesse-Eastern in 1963, and was terminated by 1983; currently it is produced by Nammo Raufoss AS in Norway. In early 1963, the M72 LAW was adopted by the U.S. Special Operations Engineer Regiment (Australia) The Special Operations Engineer Regiment (SOER) can trace its history to a number of specialist Royal Australian Engineers organisations - The Emergency Response Squadron was initially formed in 1999 from the existing Army Fire Service in response to the 1996 Blackhawk Helicopter disaster in the Townsville High Range training area. 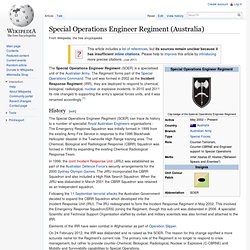 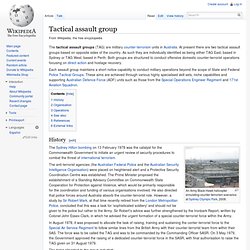 The Sydney Hilton bombing on 13 February 1978 was the catalyst for the Commonwealth Government to initiate an urgent review of security procedures to combat the threat of international terrorism. The anti-terrorist agencies (the Australian Federal Police and the Australian Security Intelligence Organisation) were placed on heightened alert and a Protective Security Coordination Centre was established. The Prime Minister proposed the establishment of a Standing Advisory Committee on Commonwealth State Cooperation for Protection against Violence, which would be primarily responsible for the coordination and funding of various organisations involved. 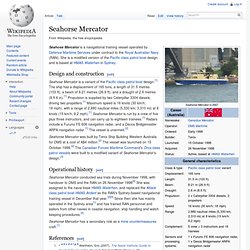 It is designed for shooting at point targets at distances up to 800 meters. Design[edit] The FR-F2 is an upgrade from the earlier FR F1 sniper rifle. It was manufactured by MAS (an abbreviation of Manufacture d'armes de Saint-Étienne - one of several government-owned arms factories in France). MAS now belongs to GIAT Industries, now NEXTER. Adf cultana training are. M24 Sniper Weapon System. IDF M24 SWS with Leopold scope and bipod. CM-32 Armoured Vehicle. AS-90. Panzerhaubitze 2000. Sniper. A sniper is a highly trained marksman who operates alone, in a pair, or with a sniper team to maintain close visual contact with the enemy and engage targets from concealed positions or distances exceeding the detection capabilities of enemy personnel. These sniper teams operate independently, with little combat asset support from their parent units. Snipers typically have highly selective and specialized training and use high-precision/special application rifles and optics, and often have sophisticated communication assets to feed valuable combat information back to their units.

In addition to marksmanship, military snipers are trained in camouflage, field craft, infiltration, special reconnaissance and observation, surveillance and target acquisition.[1] Snipers are especially effective when deployed within the terrain of urban warfare, or jungle warfare. Self-propelled artillery. In the past, self-propelled artillery has included direct-fire vehicles such as assault guns and tank destroyers. Israeli merkava. Fv101 scorpion. Enoggera Barracks. History[edit] The base has a long history, having been in existence officially since 1908, although the wider area has been used for military purposes since 1855.[2] Upon its establishment, the camp consisted of four paddocks that were used for training and drill—Bell, Fraser's, Rifle and Thompson's—and a number of rifle ranges were established there for use by civilian groups and units of the militia.