The Programming Language Lua. Introduction au langage LUA. 5.2 Reference Manual - contents. Programming in Lua. This book is a detailed and authoritative introduction to all aspects of Lua programming written by Lua's chief architect. 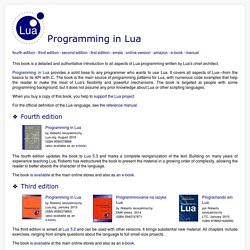 Programming in Lua provides a solid base to any programmer who wants to use Lua. It covers all aspects of Lua—from the basics to its API with C. The book is the main source of programming patterns for Lua, with numerous code examples that help the reader to make the most of Lua's flexibility and powerful mechanisms. The book is targeted at people with some programming background, but it does not assume any prior knowledge about Lua or other scripting languages. When you buy a copy of this book, you help to support the Lua project. For the official definition of the Lua language, see the reference manual. Fourth edition The fourth edition updates the book to Lua 5.3 and marks a complete reorganization of the text. The book is available at the main online stores, such as the Lua Bookstore at Amazon. 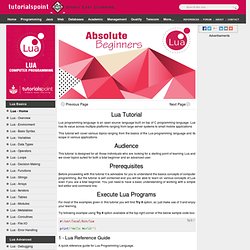 Lua has its value across multiple platforms ranging from large server systems to small mobile applications This tutorial will cover various topics ranging from the basics of the Lua programming language and its scope in various applications. This tutorial is designed for all those individuals who are looking for a starting point of learning Lua and we cover topics suited for both a total beginner and an advanced user. Before proceeding with this tutorial it is advisable for you to understand the basics concepts of computer programming. LuaRocks Wiki: LuaRocks. LuaDist. Tutorials - The LUA Socket Lib and Coroutines - Setting up a simple TCP server. This tutorial is meant to provide the user who has already some understanding in programming with the knowledge necessary to use the LUA SocketLib and the Coroutines in order to set up a TCP/IP server in a host application. 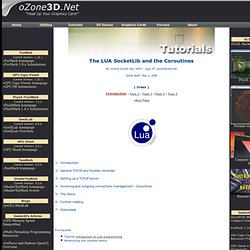 In our case, the host application is Demoniak3D but the guiding principle remains worthwhile whatever the host application is. As a part of Hyperion's core, the LUA SocketLib provides high efficiency and maximise its usability. The SocketLib is a fantastic library which provides all we need and even more for handling TCP-UPD/IP networking connections. This library offers high level objects, such as TCP or UDP clients and servers as well as FTP or HTTP protocoles. In this tutorial, we will focus on the use of objects such as socket and TCP/IP servers provided by the SocketLib. Coroutines Tutorial. What are coroutines? 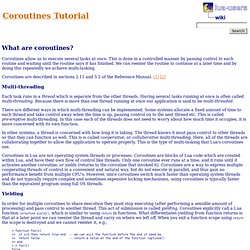 Coroutines allow us to execute several tasks at once. This is done in a controlled manner by passing control to each routine and waiting until the routine says it has finished. We can reenter the routine to continue at a later time and by doing this repeatedly we achieve multi-tasking. Codea.io. eLua - eluaproject. Koneki - Lua Development Tools, an IDE for the Lua programming language. 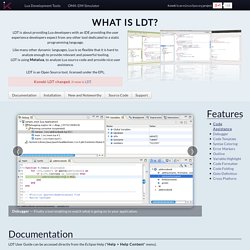 Debugger — Finally a tool enabling to watch what is going on in your application. Code Template — Use common statements quicker. Syntax Coloring — Just for getting code nicer to write and to read. Notice, locals in clear and globals in bold. Error Marker — Where is my mistake? Outline — Tired of scrolling? Lua IDE: Decoda. Today we are very pleased to announce that we’ve released Decoda, our Lua IDE (Integrated Development Environment) and debugger, as open source. 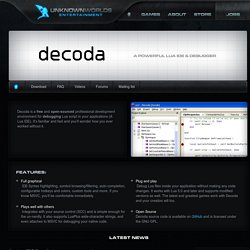 You can get the latest version of the source from GitHub and the Windows installer from the download page. We created Decoda in 2007 just as we were starting work on Natural Selection 2 and getting our company off the ground. Programmez sur votre DS avec MicroLua. Lua : un langage de script puissant - Éditions D-BookeR. Éditions D-BookeR. ZeroBrane Studio - Lua IDE/editor/debugger for Windows, Mac OSX, and Linux. Workshop 2013. Registration · program · venue · travel · accommodation · organization · participants · abstracts · tweets · videos · photos The Lua Workshop 2013 will be held in Toulouse, France, on November 23–24, 2013. 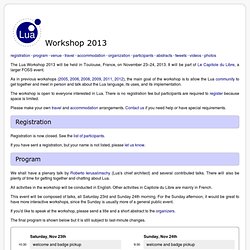 It will be part of Le Capitole du Libre, a larger FOSS event. As in previous workshops (2005, 2006, 2008, 2009, 2011, 2012), the main goal of the workshop is to allow the Lua community to get together and meet in person and talk about the Lua language, its uses, and its implementation. The workshop is open to everyone interested in Lua. There is no registration fee but participants are required to register because space is limited. Please make your own travel and accommodation arrangements. Registration. Running Lua on Mac OS X.

About Lua Lua is a lightweight programming language and has good reputation among game engines. 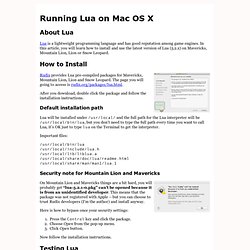 In this article, you will learn how to install and use the latest version of Lua (5.2.x) on Mavericks, Mountain Lion, Lion or Snow Leopard. How to Install. Rudix! Wiki: Installation instructions for Mac OS X. LuaRocks is a command-line tool. 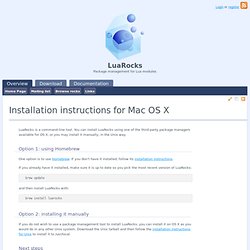 You can install LuaRocks using one of the third-party package managers available for OS X, or you may install it manually, in the Unix way. Option 1: using Homebrew One option is to use Homebrew. If you don't have it installed, follow its installation instructions. If you already have it installed, make sure it is up to date so you pick the most recent version of LuaRocks: brew update and then install LuaRocks with: LÖVE - Free 2D Game Engine. Battle of the Lua Game Engines: Corona vs. Gideros vs. Love vs. Moai. Alright, the title might be a bit over the top… what we are about to do is look at some of the most popular 2D game engines powered by Lua. 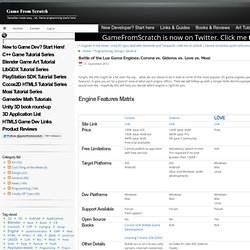 First there will be a matrix of features, to give you an “at a glance” view of what each engine offers. Then we will follow up with a simple Hello World example for each, so you can see what the code would look like. Hopefully this will help you decide which engine is right for you. * Note, I gave iTunes link only, although many of those games are also available on Google Play. Now we are going to look at a simple Hello World app written with each suite. In this sample we are going to create a window at a resolution of 1280x800, then we are going to start a background song looping ( Richard Wagners – Ride of the Valkyrie taken from here ). Corona SDK Hello World.