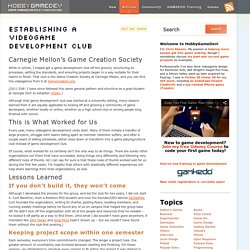 That club is the Game Creation Society at Carnegie Mellon, and you can find the videogames from it at GameCreation.org. [2011 Edit: I have since followed this same general pattern and structure as a grad student at Georgia Tech to establish VGDev.] Although that game development club was started at a university setting, many lessons learned from it are equally applicable to kicking off and growing a community of game developers, whether locally or online, whether as a high school club or among people long finished with school.

This is What Worked for Us Every year, many videogame development clubs start. Of course, what worked for us certainly isn’t the only way to do things. Lessons Learned If you don’t build it, they won’t come Emphasize completing all games. How to make a 2d Platform Game – part 3 ladders and AI. Hello and welcome back to my blog! 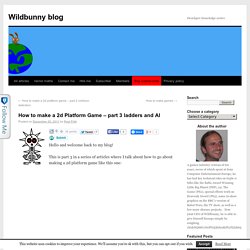 This is part 3 in a series of articles where I talk about how to go about making a 2d platform game like this one: Click the game to give it focus… Apologies for the programmer art, and my level design (not my best qualities!) Here is the previous article in case you missed it. In this particular episode I’m going to talk about the horror of Ladders and the joy of AI. Ladders Ok, so ladders are a complete pain in the ass on all fronts! The player must transition from walking along in an environment where they experience gravity and can jump to one where they do not and cannot jump. 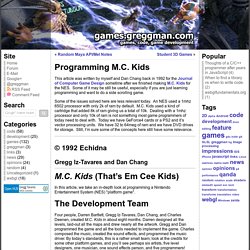 Kids for the NES. Some of it may be still be useful, especially if you are just learning programming and want to do a side scrolling game. Some of the issues solved here are less relevant today. An NES used a 1mhz 6502 processor with only 2k of ram by default. M.C. Gregg Iz-Tavares and Dan Chang In this article, we take an in-depth look at programming a Nintendo Entertainment System (NES) "platform game". Four people, Darren Bartlett, Gregg Iz-Tavares, Dan Chang, and Charles Deenen, created M.C.

Platformer Game Source in Processing. I recently gave a class at the Hacker Dojo about hobby videogame programming, and Processing from MIT Media Lab was my development environment of choice. 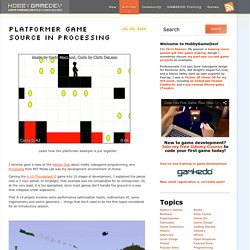 Carving the A-10 Thunderbolt II game into 10 stages of development, I explained the pieces over a 3 hour period. In hindsight, that example was too complicated for an introduction. Or, at the very least, it is too specialized, since most games don’t handle the ground in a way that collapses under explosions. That A-10 project involves some performance optimization hacks, rudimentary AI, some trigonometry and vector geometry – things that don’t need to be the first topics considered for an introductory session. In light of that, I’m putting the blog post version of that talk on hold, and instead I created a platformer game last night to use as an example. The platformer uses a grid for the ground and collision detection, which is a very common method. 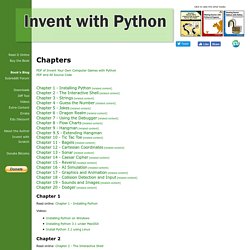 SDL:Tutorials:Drawing and Filling Circles. SDL does not ship with any built-in mechanism for drawing or filling circles. 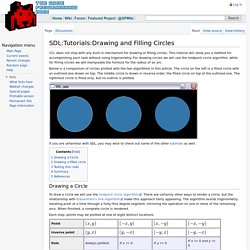 This tutorial will show you a method for accomplishing each task without using trigonometry. For drawing circles we will use the midpoint circle algorithm, while for filling circles we will manipulate the formula for the radius of an arc. Below is a comparison of circles plotted with the two algorithms in this article. The circle on the left is a filled circle with an outlined one drawn on top. The middle circle is drawn in reverse order; the filled circle on top of the outlined one.

If you are unfamiliar with SDL, you may wish to check out some of the other tutorials as well. Drawing a Circle To draw a circle we will use the midpoint circle algorithm. Each step, points may be plotted at one of eight distinct locations: This is repeated until , which can take several steps. And , so four points will be plotted at 0º, 90º, 180º and 270º. Between steps, are altered along with a third "error" variable, called . Once.