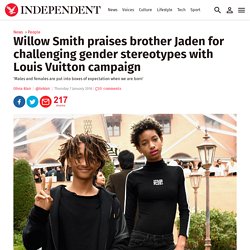 The Louis Vuitton Spring 2016 womenswear campaign was unveiled this week and, in a surprise to many, revealed Jaden, 17, as its new face. Budget 2015: Maintenance grants for poorer students 'to be scrapped' in next round of cuts. Maintenance grants for university students from low-income families will be scrapped and converted into loans in the Government’s next round of spending cuts. 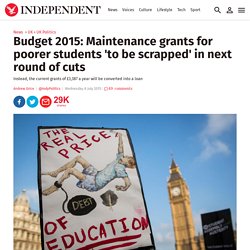 Get all the latest updates in our Budget liveblog here. Jaden Smith laughs in the face of gender stereotypes in Louis Vuitton ad. It Will Take You 24 Years To Save For A Deposit To Buy A House, Says Study. Vicky Spratt | Features Editor | Monday, 21 December 2015 The Debrief: New research finds that a total of 28 per cent of non-homeowners under the age of 45 do not believe they will ever afford to buy a property of their own Another day, another bit of bad news about Britain’s housing market. 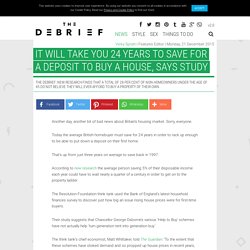 Sorry, everyone. Louboutin has extended its Nude Collection to ALL skin tones. Objects described as 'nude' are often shades of beige and pink, and are not representative of all skin tones. 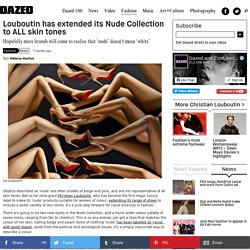 Europe Is Close To Banning Teens From Social Media. Sara Macauley | Contributing Writer | Tuesday, 15 December 2015 The Debrief: Stalking Kylie Jenner’s snapchats could be about to get a lot harder… Teens under the age of 16 could be banned from social media sites Facebook, Twitter, Instagram, Snapchat and even email if they don’t have their parents’ permission, according to newly proposed EU laws. 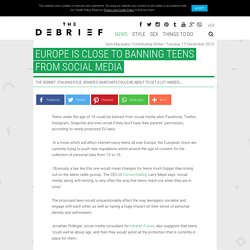 In a move which will affect internet-savvy teens all over Europe, the European Union are currently trying to push new regulations which amend the age of consent for the collection of personal data from 13 to 16. Obviously, a law like this one would mean changes for teens much bigger than losing out on the latest celeb gossip. How The Government Are Using A Legal Loophole To Screw Students Over. Vicky Spratt | Features Editor | Tuesday, 19 January 2016 The Debrief: The Government have found a way to bypass MPs and sneak through a new law which has abolished student maintenance grants, funding that was designed to help the poorest students through university. 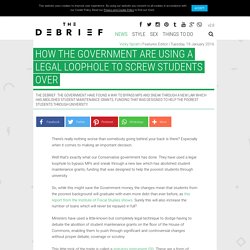 We Got an Illustrator to Draw the Biggest American Stereotypes About Britain. This Artist Is Using Beautiful Collages To Challenge Whiteness In The Art World. In Tupac Meets Matisse, Tupac has his glasses on with his shirt buttoned up. 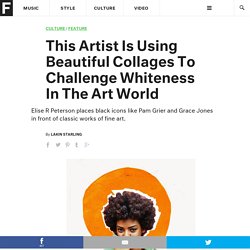 Most pictures of Tupac, he’s thug lifed out. The black man is the most feared figure in America and I think the most powerful as well. Atmospheric CO2 hits historic highs, just as global coal use sees historic drop. Whether it's defeating Keystone XL, shutting down hundreds of coal plants or persuading many of the world's biggest companies to get serious about climate action, I am sometimes astounded by how much progress the environmental movement has made in recent years. 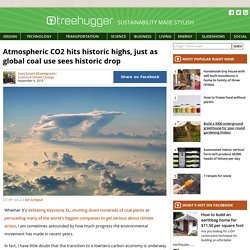 In fact, I have little doubt that the transition to a low/zero carbon economy is underway and will be very hard to reverse. The only question remains, will it happen fast enough? Perusing the headlines this morning, this question was reemphasized. On the one hand, Business Green brings us news of a Greenpeace report claiming the largest drop in global coal use in recorded history. Even as some countries build new coal plants, says the activist group, changes in certain economies—especially in China and the US—have led to a 4.6% drop in global coal use so far this year. But let's not get carried away with the good news. 87% of Earth's population lives where the air is toxic. Air pollution in China is getting a lot of press in recent times, especially with sad milestones like the first-ever smog 'Red Alert' in Beijing, but breathing clean air isn't just a dream for the Chinese. 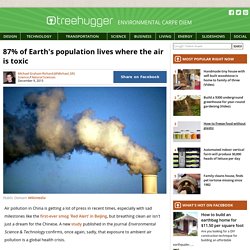 While smoking rates are decreasing in most parts of the world, Indonesia is instead seeing their smoking rates increase. Even more alarming is the fact that there are instances of children smoking their first cigarette at the age of four. Marlboro Boys is an incredibly compelling, horrifying series. The name is a play on the Marlboro Man ad campaign for Marlboro cigarettes, where the Marlboro Man was a rugged cowboy meant to sell cigarettes as a masculine vice.