Behind the scenes: Huck magazine. Distribution and marketing are permanent headaches for independent publishers – how do you break out of your own painstakingly created network and reach people who wouldn’t otherwise have heard about your magazine? 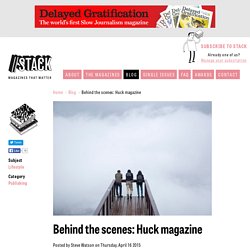 British title Huck is working hard to win new readers in North America at the moment, and it’s doing so via a pair of clever collaborations. Its book, Paddle Against the Flow, was released last month with San Francisco-based Chronicle Books; and its first clothing collection was unveiled last week with Canadian apparel company Roots. Zines & Magazines Archives - Ex Why Zed. Kinfolk Magazine  HereComesEveryone Magazine. How to Start a Magazine — The Startup. The cards are stacked against you If you happen to be afflicted with the same mental delusion that struck me four years ago when I decided to revive the art of print, the reality you must accept is that you’re going to be dealt a difficult hand. 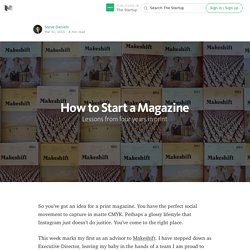 You are David facing a Goliath of distributors, retail chains, and competitors. Consider the typical magazine supply chain: you print your copies, sell to distributors, who in turn sell to stockists, who in turn sell to your readers. Right? Wrong. The second hard truth is that you will initially have a very difficult time selling ads due to the low circulation of most independent magazines. The new issue of Printed Pages is here and it’s brighter, bolder and more beautiful! The AW15 Printed Pages has landed and there’s nothing shy about it. 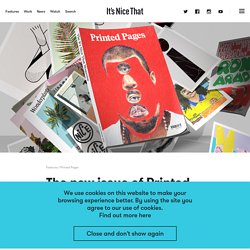 To mark the new direction this issue takes, we needed something bold and a little subversive for the cover. This gleaming red beauty comes courtesy of Eric Yahnker, whose “stack” illustrations and mix of pop culture and politics made him the man for the job. Printed Pages AW 2015. Printed Pages is an arts and design magazine which focusses on depth and discovery, combining engaging and accessible content with top-notch design values. 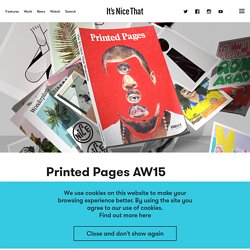 Our new issue takes us full circle and back to the roots of the first ever It’s Nice That magazine. In the making, we’ve combed through the last six months on the website to present 240 beautiful pages of some the best work and features from It’s Nice That, and along the way we’ve also encompassed the job our printed Annual used to do. How to Start a Magazine—Makeshift. Comagspecialist.co.uk. Subscription Management Services. Behind the scenes: Hotdog magazine. Sporting gradient headers and QR codes, the new all-female poetry and collage magazine Hotdog is everything you don’t expect a poetry magazine to be: funny, loud and unassuming. 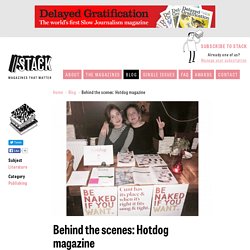 I met up with makers Megan Conery and Molly Taylor ahead of their appearance at next week’s Printout event to talk about their personal relationships with poetry and feminism, and how it all came together. So let’s start at the beginning – how did Hotdog start? Submit — hotdog. We're getting serious about issue 2. 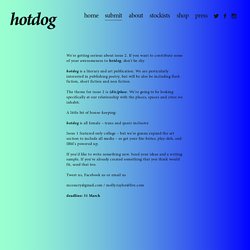 If you want to contribute some of your awesomeness to hotdog, don't be shy.hotdog is a literary and art publication. We are particularly interested in publishing poetry, but will be also be including flash fiction, short fiction and non fiction.The theme for issue 2 is (dis)place. This is grime: a new book on the most urgent british music subculture since punk. Grime is unquestionably the most urgent, unique and important music subculture to explode in Britain since punk, and, as it launches into its second decade and sets its sights on world domination -- with Skepta and Stormzy packing out venues stateside as well as at home, and cosigns from Drake and Kanye -- it's high time the scene was documented in a proper grime bible. 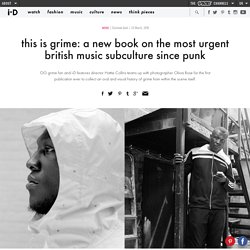 That book has just been announced, with OG grime fan and i-D features director Hattie Collins teaming up with regular i-D contributor, the photographer Olivia Rose, to present This Is Grime, a 224 page tome with stunning images that collects -- for the first time ever -- an oral history of the British subculture from the people at its very core. "It feels particularly timely that we are making This Is Grime in 2016, with the current success, globally, of both its elder statesmen, including Skepta, and newer stars such as Stormzy. Pre-order This Is Grime by Hattie Collins and Olivia Rose on Amazon now. Credits. Raw Print Public Lectures - Designers share publishing expertise - Latest news - Architecture, Design and the Built Environment. 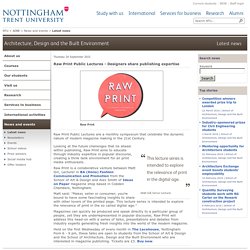 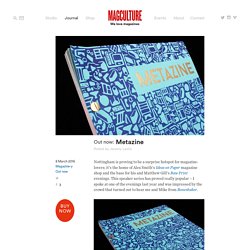 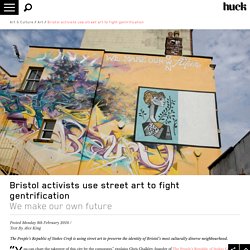 “You can chart the takeover of this city by the corporates,” explains Chris Chalkley, founder of The People’s Republic of Stokes Croft in Bristol. DIYourself at House of Vans. A new exhibition at House of Vans in South London brings together the contemporary DIY scene in the city to celebrate culture that celebrates women. Here’s a little re-cap on some girls’ stuff before we start. It’s 2016. Women received the right to vote almost 100 years ago in 1928. Comagspecialist.co.uk. Studio - magCulture.

Hotdog. Ladybeard. Bees Make Honey Creative Community. Mailing address: Bees Make Honey Creative CIC 20 Dornoch Avenue. Contemporary Other (@contemporaryother) Magazine Circulation Figures Slip 1.9% in First Half – WWD. NOT THE ENTIRE PICTURE: First-half magazine circulation figures paint a relatively bleak picture, with the entire magazine publishing industry down 1.9 percent compared with the first half of 2013, according to the Alliance for Audited Media. Numbers for single-copy sales were even worse, with a drop of 11.9 percent in the first six months. The news wasn’t all bad, though: Digital-replica editions, which was reported last year as a rapidly growing sector of the industry, grew 13 percent, representing 3.8 percent of total circulation.

This story first appeared in the August 11, 2014 issue of WWD. Looks good on paper: Forget tablet editions - a new wave of young independent publishers is producing wonderful hard-copy titles. In the days of punk, young publishers operating from bedrooms and kitchens would design and distribute their print creations with little more than a block of paper, a typewriter, a photocopier and a stapler.

Today, independent publishing has grown up and the primitive monochrome fanzine has flowered into something more artful with scores of new titles serving niche international customer bases as a generation raised on digital media rediscovers the pleasures of the printed page. Titles from the food-culture magazine The Gourmand to the interiors journal Apartamento are defying trends in the traditional industry, where big publishing houses are wrestling with the great conundrum of how to take their news-stand readership to the digital uplands of tablet and mobile.

These often-luxurious print products are not cheap. They typically sell for £10 an issue – with the glossiest fashion titles carrying a cover price of up to £30. Indie magazine sales are proving print is not dead. As a teenager, Ruth Jamieson would often feign sickness on a Friday, knowing that she could accompany her mother on the weekly shop and buy a magazine of her choice from the supermarket. It was the start of a lifelong love affair. Having gone on to work at various magazines, it didn't always make for an easy career path: she was at The Face when it folded in 2004. The notion that print is dead has been bandied around since the first modems were installed in households around the country. But while the mainstream magazine industry sector is certainly struggling, Jamieson insists that independent, non-traditional periodicals are, in fact, booming. "Just go and look at the news-stands," Jamieson, 35, says.

Indeed, last year the independent-magazine subscription service, Stack, reported a 78 per cent increase in revenue, with its number of subscribers growing by 76 per cent. The magazines on offer cover a huge spectrum. About : WOOD. LAW – About. Journal of the mental environment. Past : Article Gallery. Ichor. OOMK. Linger Longers. DIY CULTURES. PUBLICATIONS – Sang Bleu X. Sang Bleu (@sangbleu) Perspective: The Right To Offend. Betty Magazine. The Gourmand: A contemporary food, arts and culture journal. Wrap magazine. For the latest issue of Wrap we were lucky enough to be able to work with the super talented illustrator Alex Walker who created this image, ‘Cosmic Sorbet’, in response to the issues theme of balance.

Alex said he made this image with quite a free-form approach to try and capture a sense of visual balance and to make something ‘process-led and fun’. Eat Drink Toast - TOAST Magazine. Our Pretty Nostalgic Publications – Pretty Nostalgic. Indie magazine sales are proving print is not dead. Magazine chiefs urge industry change from burning platform to growth. When the chief executive of Marie Claire owner IPC Media told the great and the good of the publishing world that magazines are a "burning platform", the industry's annual conference looked set to be a bleak affair.

Marcus Rich, the new head of the UK's biggest magazine publisher, used the Professional Publishers Association conference last week to tell his peers that it is now imperative that magazines be transformed from a "burning platform into a growth business". His mixture of warning and rallying cry followed the scathing assessment of the industry's efforts to transform itself dished out by the new chief executive of Total Film publisher Future.