Top 4 Retail personalisation trends for 2017. Digital marketing offers the tantalising prospect of moving away from untargeted broadcast adverts that are seen by anyone and everyone and only work on a tiny percentage, and instead focus on laser targeted campaigns which show your ads only to the exact kind of people that will be interested in buying your product, exactly when they are mostly likely to be interested in buying it. 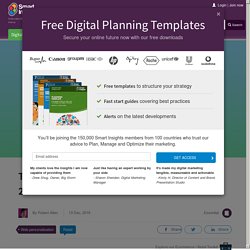 These trends, which have shaped digital advertising over the past five years, are primarily about using data to offer a personalised selection of ads to consumers based on their personal information, preferences and purchase history. This technique has disrupted the digital advertising industry, and is in the process of doing the same to retail, as personalisation will dominate retail in 2017. 1. Persona driven customer innovations. What can marketers learn from Ted Baker’s success? The retail landscape in late 2016 is as competitive as it has ever been, and with Brexit weakening the pound and raising consumers’ costs in the UK, reports abound of retailers struggling to attract customers at home. 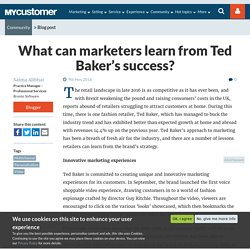 During this time, there is one fashion retailer, Ted Baker, which has managed to buck the industry trend and has exhibited better than expected growth at home and abroad with revenues 14.4% up on the previous year. Ted Baker’s approach to marketing has been a breath of fresh air for the industry, and there are a number of lessons retailers can learn from the brand’s strategy. Innovative marketing experiences Ted Baker is committed to creating unique and innovative marketing experiences for its customers. In September, the brand launched the first voice shoppable video experience, drawing customers in to a world of fashion espionage crafted by director Guy Ritchie.

Why personalisation is difficult but worth doing - Marketing Week. Personal service used to mean that the greengrocer knew your name and what fruit and vegetables you liked to buy at their shop. 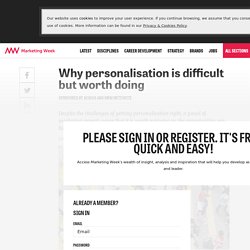 When businesses first became digital, it meant sending emails to people, addressing them by name. Now that every consumer owns a variety of digital devices, the definition of personalisation has become more complicated – and it is more difficult to achieve. Asos on the shortfalls of Netflix-style personalisation. Even though Netflix and Amazon are held up by many as among the greats when it comes to digital personalisation, their reliance on studying the past behaviour of consumers also has its shortfalls. 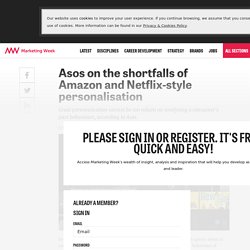 Speaking at the Market Research Society’s Impact conference today (15 March), Celina Burnett, head of marketing analytics at online fashion retailer Asos, claimed there’s just as much marketers can learn from what the two digital giants are getting wrong. She explained: “When I go on Netflix I want to receive personalised recommendations but also to have balance on what shows I am missing out on. Jonathan Saunders for Radley collection. Why we’re all about Radley’s new bag collection.... It’s Spring ladies, and aside from all the flowers blooming, and baby lambs being born, and yada yada, the changing of the seasons can only mean one thing to us fashion folk… Yep, the warmer weather means we can banish our tired old satchels and fraying rucksacks to the back of the closet whilst we hit the high street looking for THE new piece of arm candy to take us through the rest of the year. 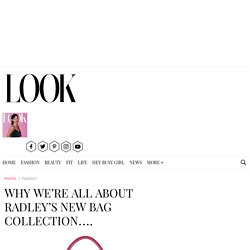 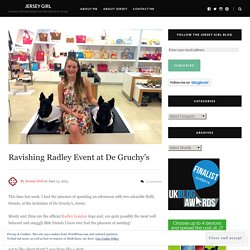 Monty and Dixie are the official Radley London dogs and, are quite possibly the most well behaved and snuggly little friends I have ever had the pleasure of meeting! De Gruchy’s Department Store had invited Monty and Dixie over for a special event, which included bubbles, canapés, cute dogs and 30% off the amazing Radley handbags, what was not to like about that?! From bags to riches: the success of Radley handbags. At the end of 2007, Radley + Co, makers of distinctive handbags branded with a small Scottie dog, exchanged hands for £130m – only two years after it had been valued at £42m in its first private equity deal. 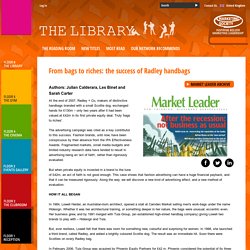 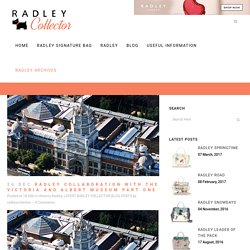 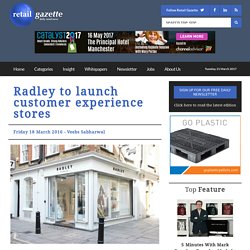 Stores from the British retailer, revered for its handbags and its scotch terrier logo, will offer features “designed to inspire and delight customers and enhance its existing London provenance store concept”. New changes include offering monogramming on a new line of small leather goods and a gift wrapping station. It is not known how many concept stores there will be although the first 65sq m store will open in the Arndale Centre in Manchester. The retailer has 33 stores in Britain and products are also sold through House of Fraser and John Lewis. ‘Fresh Goods’ Instagram handbag campaign targets younger demographic. Radley London Floral Street Bag. The lovely girls at Radley London invited myself and four other blogger babes for an intimate, fun filled day out to celebrate the launch of their new Floral Street multi-way bag. 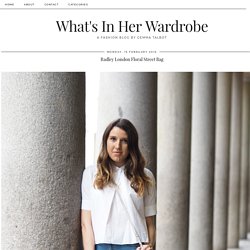 Named after their flagship London store, this beauty functions as a clutch, cross body and also a bumbag. Sticking to their quintessentially British roots, our first port of call was The National Portrait Gallery for a preview of the Vogue 100: A Century of Style exhibition. The History of Radley - Radley Collector Unofficial Fansite. Lowell Harder ( Founder of Radley ) a trained Australian architect, and mother to 3 young boys decided she needed a different direction in her life. Radley aims to bag younger market as it leaves dog days. In the aftermath of the global financial downturn, most British companies were struggling to survive, with many having to cut staff or reduce wages to stay afloat against a backdrop of banks freezing lending and consumers’ wallets staying closed.

But Radley, the British handbag company that was set up by Lowell Harder, the Australian designer, from a stall in Camden Market in London in 1998, was probably the only business whose customers were complaining about a “butch” dog after its designers changed its scotch terrier logo. Radley’s profits pay for a makeover - Retail Gazette. After a profitable year, Radley is set to target a new demographic, with a brand overhaul and a new Instagram campaign. The last few years have resulted in several losses for the British handbag and accessories brand, as it has struggled to maintain its traditional mature market audience.

Now, to celebrate the company’s turnover rising by 13%, resulting in £38.5m profit by the end of April 2014, Radley has decided to create a more youthful look in order to amplify 2015’s revenue, through a wider consumer base. Founded by Lowell Harder in 1998 and originating in Camden Market, the company has quickly progressed to become the global retailer it is today. Now selling to 47 countries worldwide, Radley had seemingly expanded too quickly, leading to losses in profit and a lack of stylistic direction. In 2013, the Mail on Sunday quoted Harder saying, “It was trying to be something it wasn’t. New Year, New Backpack - Cocoa Chelsea. New Year – New backpack. I am obsessed. I know I am mega behind on the rucksack trend…but I just never thought of getting one myself because I am an oversized, keep-everything-you-could-possibly-ever-need bag lover through and through. Radley to launch print push starring Erin O'Connor.

The shop was tasked with creating a new positioning for the brand and the resulting national print campaign is set to break this weekend. From bags to riches: the success of Radley handbags. Radley launches campaign featuring new brand ambassador Laura Bailey. Radley launches first ad campaign - Marketing Week. Radley revenues rise ahead of new year sale. My luxury everyday, with Radley - Hannah Argyle Photography. Throughout my twenties I honestly didn’t really place much importance on luxury. My Style. Ringing In the Holiday with Bells – thechicstreet.