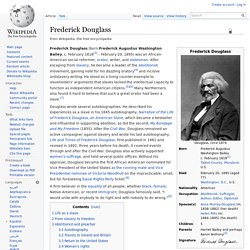 February 1818[3] – February 20, 1895) was an African-American social reformer, orator, writer, and statesman. After escaping from slavery, he became a leader of the abolitionist movement, gaining note for his dazzling oratory[4] and incisive antislavery writing. He stood as a living counter-example to slaveholders' arguments that slaves lacked the intellectual capacity to function as independent American citizens.[5][6] Many Northerners also found it hard to believe that such a great orator had been a slave.[7] A firm believer in the equality of all people, whether black, female, Native American, or recent immigrant, Douglass famously said, "I would unite with anybody to do right and with nobody to do wrong.

Life as a slave Douglass around 29 years of age. WikiMiniAtlas The exact date of Douglass's birth is unknown. He spoke of his earliest times with his mother: From slavery to freedom Abolitionist and preacher Autobiography. 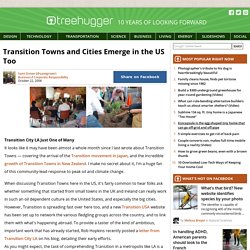 I make no secret about it, I'm a huge fan of this community-lead response to peak oil and climate change. When discussing Transition Towns here in the US, it's fairly common to hear folks ask whether something that started from small towns in the UK and Ireland can really work in such an oil dependent culture as the United States, and especially the big cities. However, Transition is spreading fast over here too, and a new Transition USA website has been set up to network the various fledgling groups across the country, and to link them with what's happening abroad.

"For our first event, we held a screening of "The End of Suburbia," together with a community discussion. It was so wonderful to get all these people together.

IMAGES. EDUCATION. Awakening with Suzanne Lie. Transmuting Gaia’s Core Dear Arcturians: I have many questions, but I know the answers are inside and I got lost in the third dimension again. 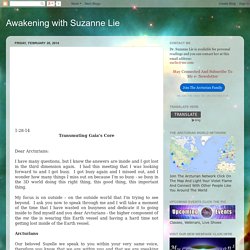 I had this meeting that I was looking forward to and I got busy. I got busy again and I missed out, and I wonder how many things I miss out on because I’m so busy - so busy in the 3D world doing this right thing, this good thing, this important thing. My focus is on outside – on the outside world that I’m trying to see beyond. Arcturians Our beloved Suzelle we speak to you within your very same voice, therefore you know that we are within you and that we are speaking through you - for we are using that body in which you have often become lost. Do you see how when you allow us to come into you – us being the higher expressions of you – for you and us are third-dimensional terms? There she is she sees us now.

But you do not need these mechanical devices. Feel that you nestled inside your Earth vessel. Feel yourself now, here, within the Core of Gaia. Theory of Mind. Philosophy of Mind. Right Brain. Brain. Memory. Rupert Sheldrake. English Videos - Rupert Sheldrake. Emperical examples. Innovation in Education. Resources. Energy. Resources.