Castile Soap Ingredients. Castile soap originated in Spain, though the name came to refer to any hard, white, olive-oil based soap. 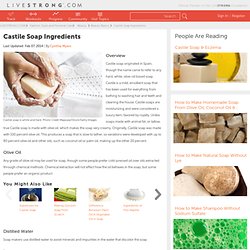 Castile is a mild, emollient soap that has been used for everything from bathing to washing hair and teeth and cleaning the house. Castile soaps are moisturizing and were considered a luxury item, favored by royalty. Make "Lye-Free" Liquid Castile Soap from your Kitchen. Ingredients: * 47 oz organic olive oil (technically castile soap is only made from olive oil but, feel free to try something completely different) * 32.9 distilled water * 9.39 oz KOH (potassium hydroxide)(where we get ours) * (Later at dilution) 80 oz of distilled water Equipment:(all pots, spoons, bowls etc. make sure they are stainless steel and/or heat safe) * Slowcooker (one that you will only use for soap, do not use again for food) * Accurate scale * Stick blender, immersion blender * Large stainless steel pot * Spoons * Bowl(s) * Vinegar * Gloves * Goggles * Hat * Containers to store your soap * Notepad and pen Make sure you can set aside enough time during the day to give attention to your project without any distractions (easier said than done), have all of your materials ready to go, and ingredients already measured in safe and covered containers. 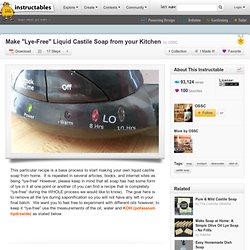 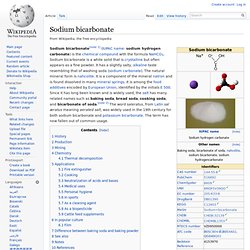 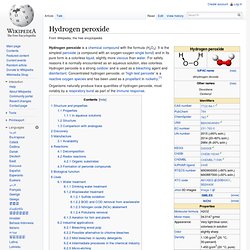 It is the simplest peroxide (a compound with an oxygen-oxygen single bond) and in its pure form is a colorless liquid, slightly more viscous than water. For safety reasons it is normally encountered as an aqueous solution, also colorless. Hydrogen peroxide is a strong oxidizer and is used as a bleaching agent and disinfectant. Concentrated hydrogen peroxide, or 'high-test peroxide' is a reactive oxygen species and has been used as a propellant in rocketry.[1] Organisms naturally produce trace quantities of hydrogen peroxide, most notably by a respiratory burst as part of the immune response.

Structure and properties[edit] Properties[edit] The boiling point of H 2O 2 has been extrapolated as being 150.2 °C, however, in practice hydrogen peroxide will undergo potentially explosive thermal decomposition if heated to this temperature. In aqueous solutions[edit] 12 Natural Toothpaste Alternatives that Will Surprise You. Natural toothpaste alternatives are all the rage these days. 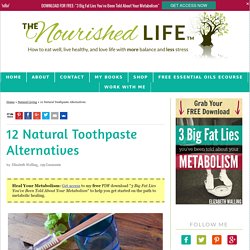 So, what’s wrong with toothpaste? Well, like most commercial health and beauty products on the market, toothpaste has been industrialized over the years. Here are just a few of the questionable ingredients commonly found in commercial toothpastes: Fluoride. While fluoride is supposedly the ingredient that prevents cavities, it doesn’t do that job very well and can actually be very toxic to the body. Homemade Remineralizing Toothpaste Recipe for Oral Health. The Whimsical Wife - Cook, Create, Decorate.

Sorry no Tasty Tuesday today but I have something extra special to show you. 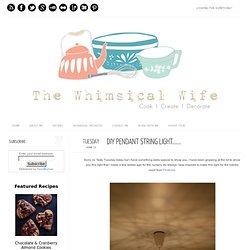 I have been gnawing at the bit to show you this light that I made a few weeks ago for the nursery. As always I was inspired to make this light for the babies room from Pinterest. Gotta love Pinterest for so many wonderful and inspiring ideas..... In my original "inspiration" for the baby room I wanted to buy this Maskros light from Ikea. It had a nice $150 price tag on it and I just knew we couldn't afford to put this in the babies room no matter how much I wanted it. 4 Homemade Traps to Get Rid of Fruit Flies. Fruit flies are the bane of many homeowners existence. 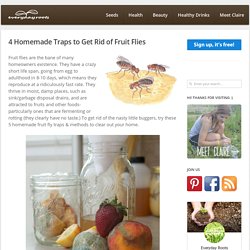 They have a crazy short life span, going from egg to adulthood in 8-10 days, which means they reproduce at a ridiculously fast rate. They thrive in moist, damp places, such as sink/garbage disposal drains, and are attracted to fruits and other foods-particularly ones that are fermenting or rotting (they clearly have no taste.) To get rid of the nasty little buggers, try these 5 homemade fruit fly traps & methods to clear out your home. 1. Apple Cider Vinegar Trap Before you panic about your fruit-fly invasion, start with a simple trap and some apple cider vinegar. You will need… Making Homemade Laundry Soap. This page is my own personal writings and is copyright protected. 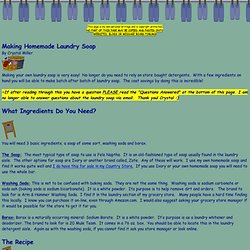 NO PART OF THIS PAGE MAY BE COPIED AND PASTED ONTO WEBSITES, BLOGS OR MESSAGE BOARD FORUMS! Making Homemade Laundry Soap By Crystal Miller Making your own laundry soap is very easy! No longer do you need to rely on store bought detergents. ~If after reading through this you have a question PLEASE read the "Questions Answered" at the bottom of this page. Borax versus Borax Substitute. This discussion regarding using Borax or Borax substitute, seems to be appearing again on posts so thought I would share my views. 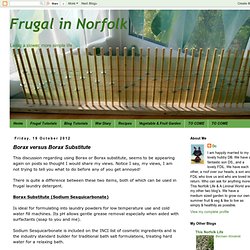 Notice I say, my views, I am not trying to tell you what to do before any of you get annoyed! There is quite a difference between these two items, both of which can be used in frugal laundry detergent. 67 Homemade Cleaning Recipes.