Netflix coming to Facebook overseas, but not in U.S. A legacy of Robert Bork's Supreme Court nomination hearings means Americans won't get to use Netflix on Facebook. 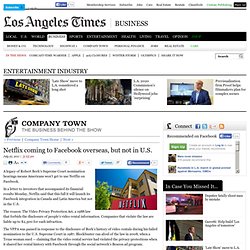 In a letter to investors that accompanied its financial results Monday, Netflix said that this fall it will launch its Facebook integration in Canada and Latin America but not in the U.S. The reason: The Video Privacy Protection Act, a 1988 law that forbids the disclosure of people's video rental information. Google+ and the loss of online anonymity. Why Google cares if you use your real name. It's official: Time machines won't work. Doc's super fast car won't do it. 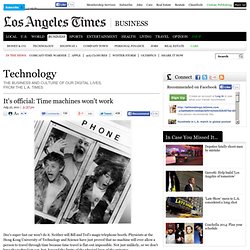 Neither will Bill and Ted's magic telephone booth. Physicists at the Hong Kong University of Technology and Science have just proved that no machine will ever allow a person to travel through time because time travel is flat-out impossible. Design View / Andy Rutledge - News Redux. Digital news is broken. 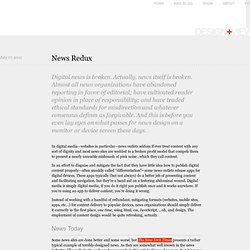 Actually, news itself is broken. Borders Books is down -14 square miles to go... - Jonathan Steiman. Bing Becomes a Costly Distraction for Microsoft - Breakingviews. Earth to Microsoft: Don’t sell Bing. In the New York Times, Robert Cryan and Martin Hutchison of Reuters BreakingViews suggest that Microslft sell its Bing search engine, either outright or in exchange for stock in a company that can do more with it than rank a distant #2 to Google while piling up billions per year in losses, which is what Bing is doing for Microsoft right now. 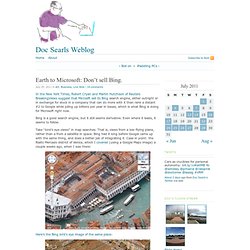 Bing is a good search engine, but it still seems derivative. Even where it leads, it seems to follow. Take “bird’s eye views” in map searches. Apple Sales in China Zoom Ahead of Competitors. Huge crowds descend the store’s glass staircase, only to discover legions of mostly young Chinese crowding around spare displays of Apple’s devices. 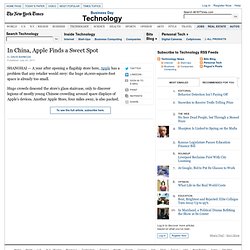 Another Apple Store, four miles away, is also packed. To cope, Apple says it is now planning a third, even larger Shanghai store, as well as dozens of other stores throughout the country. The expansion is driven by customers like Wang Shangyan, a 17-year-old professed Apple maniac. “I have many Apple products, like Touch, , 2 and MacBook,” Mr. Wang said after browsing the Apple Store here this week. Apple says its Chinese outlets — two in Beijing and two in Shanghai — are now the four most heavily trafficked Apple stores in the world. Analysts say few global brands have achieved such a feat in China. “Apple has done what Google and Facebook cannot do: become No. 1 in China,” said John Quelch, former senior associate dean of Harvard Business School and now head of the China Europe International Business School in Shanghai. 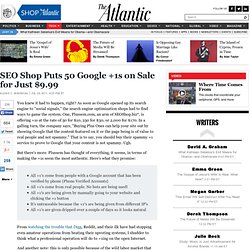 As soon as Google opened up its search engine to "social signals," the search engine optimization shops had to find ways to game the system. One, Plussem.com, an arm of SEOShop.biz*, is offering +1s at the rate of 50 for $10, 250 for $30, or 2,000 for $170. Why Do Viral Videos Go Viral? Kobo, WSJ Halt Direct Sales on Apple-Device Apps. Sidestepping Apple: From Amazon to Condé Nast, Companies Rethink App Strategies. We all knew that once Apple starting enforcing new rules for in-app purchases, it would change how media companies do business on the iPhone and iPad. 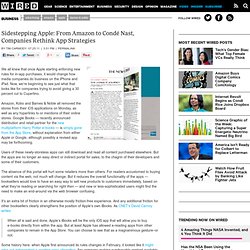 Now, we’re beginning to see just what that looks like for companies trying to avoid giving a 30 percent cut to Cupertino. Amazon, Kobo and Barnes & Noble all removed the stores from their iOS applications on Monday, as well as any hyperlinks to or mentions of their online stores. Google Books — recently announced distribution and retail partner for the new multiplatform Harry Potter e-books — is simply gone from the App Store, without explanation from either Apple or Google, although possibly a revised app may be forthcoming. Users of these newly-storeless apps can still download and read all content purchased elsewhere.

But the apps are no longer an easy direct or indirect portal for sales, to the chagrin of their developers and some of their customers. OS X Lion: Macs are no longer beginner-friendly. Now that OS X Lion has been out for a couple of days, complaints are mounting from users about how some of their favorite functions have changed or that adapting to “natural scrolling” is difficult due to years of muscle memory. 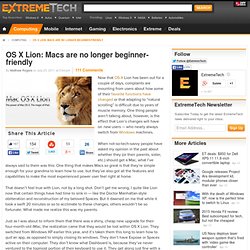 One thing people aren’t talking about, however, is the effect that Lion’s changes will have on new users — who nearly always switch from Windows machines. When not-so-tech-savvy people have asked my opinion in the past about whether they (or their parents, sister, etc.) should get a Mac, what I’ve always said to them was this: One thing that makes Macs so great is that they’re simple enough for your grandma to learn how to use, but they’ve also got all the features and capabilities to make the most experienced power user feel right at home. That doesn’t feel true with Lion, not by a long shot.