A B+ for the beta Google+ I've been using Google+ for less than a day. 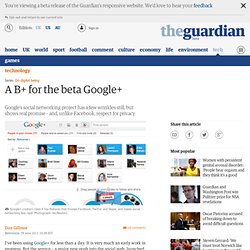 It is very much an early work in progress. But the service – a major new push into the social web, launched in a semi-public test phase this week by the search and advertising giant – is already ample proof that the social network and media worlds do not begin and end with Facebook. What Google has understood, and put (with some glitches) into practice, is what Facebook has resisted. First, privacy has been baked into the service, not added as an afterthought. The privacy settings still need work, but it's clear that Google has learned from the mistakes it has made and the ongoing privacy insults that Facebook showers on its users. Second, Google appreciates the reality that we live in generally non-concentric groups such as family, close friends, colleagues, people with whom we do business, social acquaintances and more.

Last week I took a trip to Silicon Valley, zigzagging around to meet with start-ups, venture capitalists and the big technology companies that inhabit the area. My goal with these meetings was to get a glimpse of new themes and services consumers could soon expect to see. Although everyone I met with was hard at work on exciting new products, I can’t really tell you about them. Walking Around In Circles: As Google+ Opens Up Will People Start Using It Correctly? Exclusive: Myspace to Be Sold to Specific Media for $35 Million - Kara Swisher. Closing another chapter on one of the Internet’s most iconic properties, Myspace has been sold to to Specific Media, an advertising network, for $35 million. 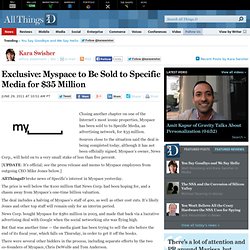 Sources close to the situation said the deal is being completed today, although it has not been officially signed. Myspace’s owner, News Corp., will hold on to a very small stake of less than five percent. [UPDATE: It's official; see the press release and memo to Myspace employees from outgoing CEO Mike Jones below.] AllThingsD broke news of Specific’s interest in Myspace yesterday. The price is well below the $100 million that News Corp. had been hoping for, and a chasm away from Myspace’s one-time billion valuation. The deal includes a halving of Myspace’s staff of 400, as well as other cost cuts. News Corp. bought Myspace for $580 million in 2005, and made that back via a lucrative advertising deal with Google when the social networking site was flying high.

According to a report yesterday in The Wall Street Journal: Saving Space. I think the year was 2006, or maybe it was 2007. 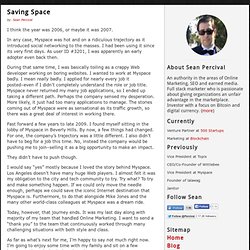 Why is European broadband faster and cheaper? Blame the government. If you've stayed with friends who live in European cities, you've probably had an experience like this: You hop onto their WiFi or wired internet connection and realize it's really fast. 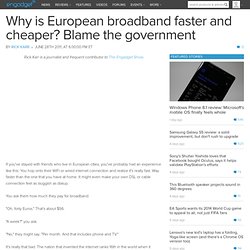 Way faster than the one that you have at home. It might even make your own DSL or cable connection feel as sluggish as dialup. You ask them how much they pay for broadband. Can Turntable.fm Survive Its Popularity? Innovative social music service Turntable.fm faces some big challenges. 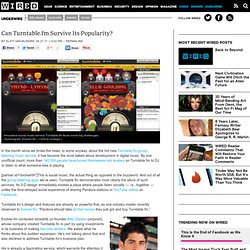 (Screengrab: Evolver.fm -- Click to enlarge.) In the month since we broke the news, to some anyway, about the hot new Turntable.fm group-listening music service, it has become the most talked-about development in digital music. By one unofficial count, more than 140,000 people have turned themselves into avatars on Turntable.fm to DJ or listen to what someone else is playing. What Makes the Thunderbolt Cable Lightning Fast « iFixit Blog. It’s the chips. 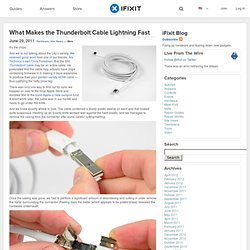 And we’re not talking about the Lay’s variety. We received good word from one of our friends, Ars Technica’s own Chris Foresman, that the $50 Thunderbolt cable may be an active cable. He postulated that the cable may actually have chips containing firmware in it, making it more expensive to produce than your garden-variety HDMI cable — thus justifying the hefty price tag. The technology inside Apple's $50 Thunderbolt cable. The first Thunderbolt compatible peripherals—Promise's Pegasus RAIDs—started shipping on Tuesday. 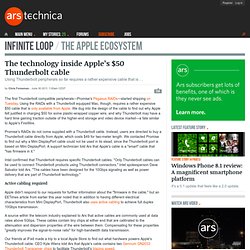 Using the RAIDs with a Thunderbolt equipped Mac, though, requires a rather expensive $50 cable that is only available from Apple. We dug into the design of the cable to find out why Apple felt justified in charging $50 for some plastic-wrapped copper wire, and why Thunderbolt may have a hard time gaining traction outside of the higher-end storage and video device market—a fate similar to Apple's FireWire. Promise's RAIDs do not come supplied with a Thunderbolt cable. Instead, users are directed to buy a Thunderbolt cable directly from Apple, which costs $49 for two-meter length. We contacted Promise to find out why a Mini DisplayPort cable could not be used in its stead, since the Thunderbolt port is based on Mini DisplayPort.

What Google+ Learned from Buzz and Wave.