Fishy Chips: Spies Want to Hack-Proof Circuits. Watch the Pope Send His First Tweet on an iPad. WakeMate 2.0: Helping You Kiss Those Groggy Mornings Goodbye. For Real, This Time. The story of WakeMate could be viewed as a warning to all tech-savvy entrepreneurs out there: building a hardware device is much more difficult than most web applications. 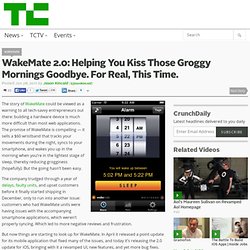 The promise of WakeMate is compelling — it sells a $60 wristband that tracks your movements during the night, syncs to your smartphone, and wakes you up in the morning when you’re in the lightest stage of sleep, thereby reducing grogginess (hopefully). But the going hasn’t been easy. The company trudged through a year of delays, faulty units, and upset customers before it finally started shipping in December, only to run into another issue: customers who had WakeMate units were having issues with the accompanying smartphone applications, which weren’t properly syncing.

Which led to more negative reviews and frustration. But now things are starting to look up for WakeMate. Revisiting 'Zork': What We Lost in the Transition to Visual Games - Philip Bump - Technology. Text-based adventures were written as much as they were designed, employing tantalizing adjectives to create a sense of the world In my mind, the house is clapboard, with a black, precisely shingled roof and shutters in a bit of disrepair. 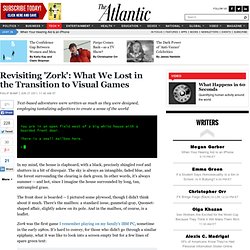 The sky is always an intangible, faded blue, and the forest surrounding the clearing is dark green. Introducing the Google+ project: Real-life sharing, rethought for the web. Update: For our international readers, this post is also available in French, German, Italian, Japanese, Portuguese, Russian and Spanish. - Ed. 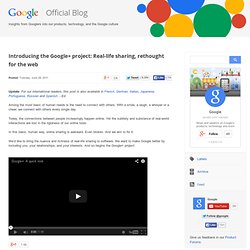 Among the most basic of human needs is the need to connect with others. With a smile, a laugh, a whisper or a cheer, we connect with others every single day. Today, the connections between people increasingly happen online. Yet the subtlety and substance of real-world interactions are lost in the rigidness of our online tools. Google gave original Mac designer free rein on new Google+ UI. By Josh Ong Google's new Google+ social networking project departs from the company's usually spartan interfaces with an animated UI designed by original Apple Macintosh team member Andy Hertzfeld.Update: Hertzfeld has written a Google+ post giving credit to his colleagues who also contributed to the service's user interface. 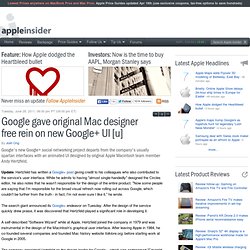 While he admits to having "almost single-handedly" designed the Circles editor, he also notes that he wasn't responsible for the design of the entire product. Inside Google+ — How the Search Giant Plans to Go Social. Google, the world’s largest search company, is formally making its pitch to become a major force in social networking. 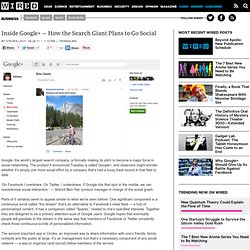 The product it announced Tuesday is called Google+, and observers might wonder whether it’s simply one more social effort by a company that’s had a lousy track record in that field to date. ‘On Facebook I overshare. On Twitter, I undershare. If Google hits that spot in the middle, we can revolutionize social interaction.’ — Shimrit Ben-Yair, product manager in charge of the social graph. Parts of it certainly seem to appear similar to what we’ve seen before. Google Yawn. Tech blogs not sold on Google's 'Facebook clone' On Tuesday the search giant unveiled a social networking "project" called Google+. 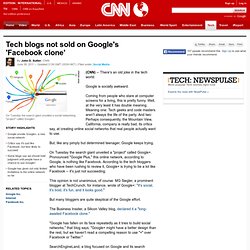 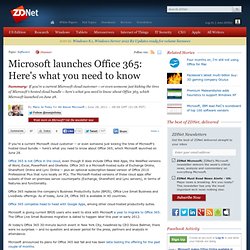 Office 365 is not Office in the cloud, even though it does include Office Web Apps, the Webified versions of Word, Excel, PowerPoint and OneNote. Office 365 is a Microsoft-hosted suite of Exchange Online, SharePoint Online and Lync Online -- plus an optional subscription-based version of Office 2010 Professional Plus that runs locally on PCs. The Microsoft-hosted versions of these cloud apps offer subsets of their on-premises server counterparts (Exchange, SharePoint and Lync servers), in terms of features and functionality. Office 365 replaces the company's Business Productivity Suite (BPOS), Office Live Small Business and Live@edu offerings. Office 365 and why it will succeed. By tim, on June 28th, 2011 Follow tim on Twitter Today is launch day for Microsoft’s Office 365, which offers use of Exchange, SharePoint and Lync hosted by Microsoft at commodity prices – not quite as low as $50 per user per year for Google Apps, but low enough that it is likely to be a substantial saving for most customers, versus the cost of installing, maintaining and backing up on-premise versions of the same software. 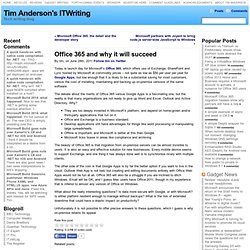 The debate about the merits of Office 365 versus Google Apps is a fascinating one, but the reality is that many organisations are not ready to give up Word and Excel, Outlook and Active Directory. Why? The beauty of Office 365 is that migration from on-premise servers can be almost invisible to users. It is also an easy and effective solution for new businesses. Office 365 vs. Google Apps: The InfoWorld review. Everything's going to the cloud, but only the hopelessly naïve would believe it's a stairway to heaven. 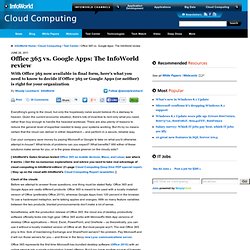 Given the current economic situation, there's lots of incentive to rent only what you need, rather than buy enough to handle the heaviest workload. There are also plenty of reasons to reduce the general level of expertise needed to keep your systems working. But it's by no means certain that the cloud can deliver in either department -- and perform in a secure, reliable way. Can your company save money by paying Microsoft or Google to take on what you'd otherwise attempt in-house?

Android activations soar, not very many are tablets. Google must be feeling downright giddy today with word that Android is seeing 500,000 device activations each day. 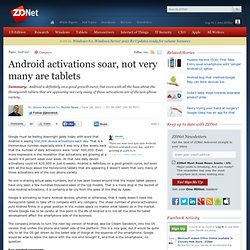 That is a tremendous number, especially since it was only a few weeks back that the number of daily activations were "only" 400,000. Even more impressive is the revelation that activations are growing at a decent 4.4 percent week over week. At that rate daily device activations could hit 620,000 in just 6 weeks. Android is definitely on a good growth curve, but even with all the buzz about the Honeycomb tablets that are appearing it doesn't seem that very many of those activations are of the non-phone variety. No one is sharing actual sales numbers, but it has been tossed around that the major tablet players have only seen a few hundred thousand sales of the top models.

Google is activating so many Android devices, phones or otherwise, that it really doesn't need the Honeycomb tablet to take off to compete with any company. See related coverage: