Web apps get the ultimate endorsement: Windows 8. With the Internet's importance steadily gaining, it's not as if Web programmers needed an ego boost. 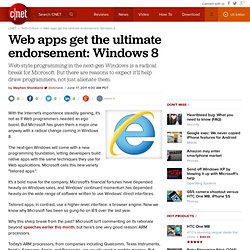 But Microsoft has given them a major one anyway with a radical change coming in Windows 8. The next-gen Windows will come with a new programming foundation, letting developers build native apps with the same techniques they use for Web applications. Microsoft calls this new variety "tailored apps. " It's a bold move for the company. Microsoft's financial fortunes have depended heavily on Windows sales, and Windows' continued momentum has depended heavily on the wide range of software written to use Windows' direct interfaces. Tailored apps, in contrast, use a higher-level interface: a browser engine.

Time Warner Cable Again Testing Metered Billing - Despite Significant Consumer Backlash the Last Time Around. Franken's location privacy bill to close mobile tracking "loopholes" (Build 20110608151458) Not content to let Apple and Google continue to sort out their location tracking policies on their own, Senator Al Franken (D-MN) has introduced a new bill meant to "close current loopholes in federal law to ensure that consumers know what location information is being collected about them and allow them to decide if they want to share it. 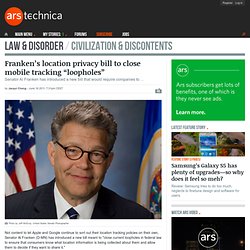 " Introduced with the help of Senator Richard Blumenthal (D-CT), the Location Privacy Protection Act of 2011's main focus is to obtain express consent from mobile device users before their locations are collected and shared with third parties, such as advertisers. If the company doing the collecting—the senators are looking at you, Apple and Google—obtains information for more than 5,000 devices, the bill says it must take extra steps to protect that information from threats, inform customers about the existence of the information, and delete it immediately upon the user's request. RIM Profit Falls Below Estimates - NYTimes.com (Build 20110608151458) 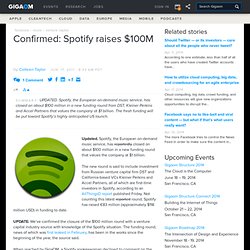 Spotify, the European on-demand music service, has reportedly closed on about $100 million in a new funding round that values the company at $1 billion. The new round is said to include investment from Russian venture capital firm DST and California-based VCs Kleiner Perkins and Accel Partners, all of which are first-time investors in Spotify, according to an AllThingsD report published Friday. Not counting this latest reported round, Spotify has raised €83 million (approximately $118 million USD) in funding to date. UPDATE: We’ve confirmed the closure of the $100 million round with a venture capital industry source with knowledge of the Spotify situation. The funding round, news of which was first leaked in February, has been in the works since the beginning of the year, the source said. Shaver » a three-dimensional platform (Build 20110608151458) Firefox now includes, on all desktop platforms, support for a technology known as WebGL. 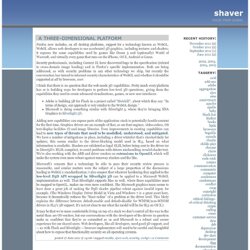 WebGL allows web developers to use accelerated 3D graphics, including textures and shaders; it exposes the same capabilities used by games like Doom 3 and (optionally) World of Warcraft, and virtually every game that runs on the iPhone, OS X, Android or Linux. Security professionals, including Context IS, have discovered bugs in the specification (related to cross-domain image loading) and in Firefox’s specific implementation.

Both are being addressed, as with security problems in any other technology we ship, but recently the conversation has turned to inherent security characteristics of WebGL and whether it should be supported at all by browsers, ever . LulzSec - 1000th tweet statement. An Open Letter to LulzSec Greetings, Gentlemen. The Game of Lulz is one i' - Pastebin.com (Build 20110608151458) AOL Hell: An AOL Content Slave Speaks Out « News (Build 20110608151458) I got the job through a friend. 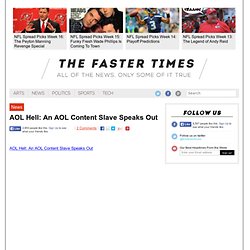 The job was this: I would write about TV for a section of the AOL Television website. In theory, this sounded great. In exchange for writing about “The Simpsons” and other TV shows, I would be making $35,000 a year (which sounded like a shockingly large amount of money to me at the time; and sadly, it still does). I performed this job for less than a year before I was fired. During that period, I wrote more than 350,000 words for AOL. You’d think it’d be fun, wouldn’t you? Some people struggle to write for their whole lives, and only dream of ever getting paid for it. But this was part of the problem. I was given eight to ten article assignments a night, writing about television shows that I had never seen before. RIM Profit Falls Below Estimates - NYTimes.com (Build 20110608151458) And Why That's Awesome! - Launch - By Jason Calacanis The IPO market for tech companies in web 1.0 was a disaster for the public because the companies failed to become businesses half the time. 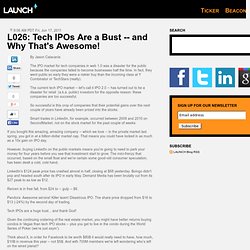 In fact, they went public so early they were a riskier buy than the incoming class at Y Combinator or TechStars (really). Everything That's Wrong With Research In Motion.