Pentagon Wants a Social Media Propaganda Machine. App developers withdraw from US as patent fears reach 'tipping point' App developers are withdrawing their products for sale from the US versions of Apple's App Store and Google's Android Market for fear of being sued by companies which own software patents - just as a Mumbai-based company has made a wide-ranging claim against Microsoft, Apple, Google, Yahoo and a number of other companies over Twitter-style feeds, for which it claims it has applied for a patent. 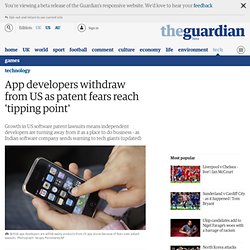 Software patent owners in the US have latched onto potential revenue streams to be earned from independent developers by suing over perceived infringements of their intellectual property - which can be expensive for developers to defend even if they are successful. Now developers in Europe are retreating from the US to avoid the expense and concern such "patent trolls" are causing. Shaun Austin, another app developer based in Cheltenham, said that "selling software in the US has already reached the non-viable tipping point". That has led developers to take evasive action. When Your E-Mail Goes Unanswered. Betsy Rapoport, an editor and life coach, said: “I don’t believe I have ever received an answer from any e-mail I’ve ever sent my children, now 21 and 18. 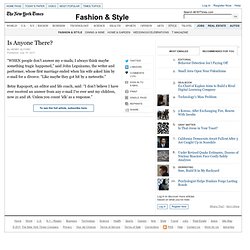 Unless you count ‘idk’ as a response.” The British linguist David Crystal said that his wife recently got a reply to an e-mail she sent in 2006. “It was like getting a postcard from the Second World War,” he said. The roaring silence. The pause that does not refresh. Twitter and App Makers Feel Growing Pains. 10 Years of Apple Stores: the non-celebration. Apple and understatement aren’t close relatives. 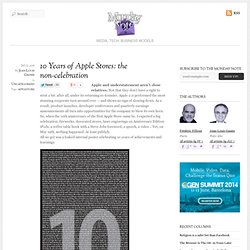 Not that they don’t have a right to strut a bit: after all, under its returning co-founder, Apple 2.0 performed the most stunning corporate turn around ever — and shows no sign of slowing down. As a result, product launches, developer conferences and quarterly earnings announcements all turn into opportunities for the company to blow its own horn. So, when the 10th anniversary of the first Apple Store came by, I expected a big celebration: fireworks, decorated stores, laser engravings on Anniversary Edition iPods, a coffee table book with a Steve Jobs foreword, a speech, a video… Yet, on May 19th, nothing happened.

At least publicly. Is Social In Google’s DNA? Editor’s note: This guest post is written by Tom Anderson, the former President, founder and first friend on MySpace. 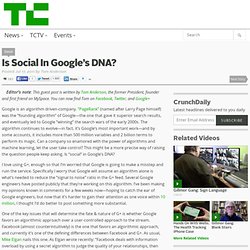 You can now find Tom on Facebook, Twitter, and Google+ Google is an algorithm driven-company. “PageRank” (named after Larry Page himself) was the “founding algorithm” of Google—the one that gave it superior search results, and eventually led to Google “winning” the search wars of the early 2000s. The algorithm continues to evolve—in fact, it’s Google’s most important work—and by some accounts, it includes more than 500 million variables and 2 billion terms to perform its magic. Three-Quarters of Google+ Users Are Men. In the two weeks since Google+ first launched, the social networking site has amassed a user base of over 10 million people, Google CEO Larry Page said Thursday. 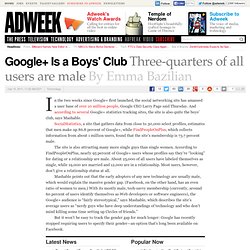 And according to several Google+ statistics tracking sites, the site is also quite the boys’ club, says Mashable. Google+ has made Twitter boring, here’s what Twitter should do about that. For the past few days I’ve been hanging out in Jackson Hole with a bunch of geeks and one thing I’ve noticed over and over is how boring Twitter has gotten when compared to Google+. 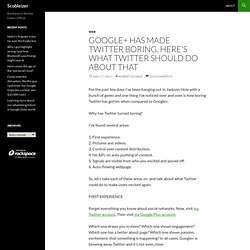 Why has Twitter turned boring? TOLDJA: Why Google Circles is a Giant Fail « Marketing Nirvana. Google+ (Google’s new social offering) seeks to differentiate itself from Facebook with three key features: Google Circles (their tentpole feature, seemingly a retelling of Facebook privacy lists), Google Sparks (seriously useless) and Google Hangouts (which was my first positive reaction to the features Google+ launched with. 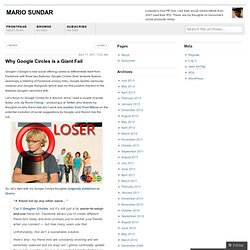 Google, Twitter Flaunt Social Stats … It’s Like 2003 All Over Again. Whether on purpose or not, Google and Twitter are having a little back-and-forth this week about the size of their social networks — or, maybe more accurately, about the activity levels on their social networks. Google+ has X amount of users and the +1 button gets served Y times per day. Twitter delivers N tweets every day and saw P new signups just yesterday.

Can We Ever Digitally Organize Our Friends? « Design « kev/null. In Design , Technology on 15 July 2011. When Google+ launched last week, one of the most discussed features was Circles. Man sues Registry after license mistakenly revoked. John H. 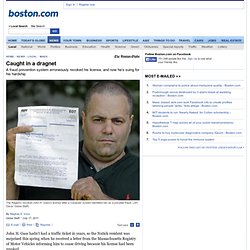 Gass hadn’t had a traffic ticket in years, so the Natick resident was surprised this spring when he received a letter from the Massachusetts Registry of Motor Vehicles informing him to cease driving because his license had been revoked. “I was shocked,’’ Gass said in a recent interview. “As far as I was concerned, I had done nothing wrong.’’ TED's Chris Anderson: the man who made YouTube clever. A few minutes after Alain de Botton announced to a packed auditorium in Edinburgh that secularism needed to learn the lessons of religion and reintroduce the concept of the sermon, Chris Anderson, the head of TED, needed to fill a few minutes and asked for questions from the floor. 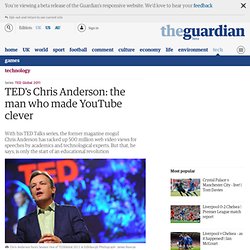 "Is TED a new religion? " asked someone. "I can answer that," he said quickly. "Absolutely not. " And yet TED has brought back the concept of the sermon – 18-minute talks delivered by absolute experts in their fields. Why TV Companies Couldn’t Care Less About Original Online Video. Editor’s note: The following guest post was written by Ashkan Karbasfrooshan, founder and CEO of WatchMojo. 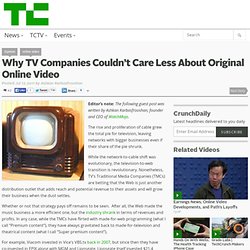 The rise and proliferation of cable grew the total pie for television, leaving networks with bigger businesses even if their share of the pie shrunk. While the network-to-cable shift was evolutionary, the television-to-web transition is revolutionary. Nonetheless, TV’s Traditional Media Companies (TMCs) are betting that the Web is just another distribution outlet that adds reach and potential revenue to their assets and will grow their business when the dust settles. Whether or not that strategy pays off remains to be seen. After all, the Web made the music business a more efficient one, but the industry shrank in terms of revenues and profits. Why Quora is in Trouble.