Google Employee No. 59 on Google+, Privacy and Why He Left - Speakeasy - WSJ - Aurora. How Much Is a User Worth? - Technology Review - Aurora. Internet companies are notoriously difficult to value, as investors learned in the dot-com crash 11 years ago. 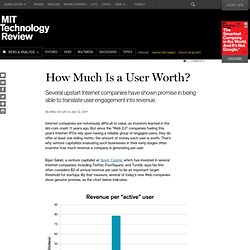 But since the “Web 2.0” companies fueling this year’s Internet IPOs rely upon having a reliable group of engaged users, they do offer at least one telling metric: the amount of money each user is worth. That’s why venture capitalists evaluating such businesses in their early stages often examine how much revenue a company is generating per user. Bijan Sabet, a venture capitalist at Spark Capital, which has invested in several Internet companies, including Twitter, FourSquare, and Tumblr, says his firm often considers $2 of annual revenue per user to be an important target threshold for startups. By that measure, several of today’s new Web companies show genuine promise, as the chart below indicates.

Feds defend Internet domain seizure in piracy crackdown - Aurora. Federal prosecutors are asking a judge not to return the domain names of one of Spain’s most popular websites seized as part of a major US crackdown on Internet piracy. 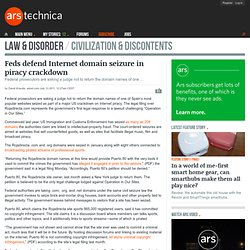 The legal filing over Rojadirecta.com represents the government’s first legal response to a lawsuit challenging “Operation in Our Sites.” Commenced last year, US Immigration and Customs Enforcement has seized as many as 208 domains the authorities claim are linked to intellectual-property fraud. The court-ordered seizures are aimed at websites that sell counterfeited goods, as well as sites that facilitate illegal music, film and broadcast piracy. The Rojadirecta .com and .org domains were seized in January along with eight others connected to broadcasting pirated streams of professional sports. Puerto 80, the Rojadirecta site owner, last month asked a New York judge to return them. Puerto 80, which claims the Rojadirecta site sports 865,000 registered users, said it has committed no copyright infringement.

Going in Google+ Circles. Review of Google+ - Katherine Boehret - The Digital Solution - AllThingsD - Aurora. Forget being friended on Facebook or followed on Twitter. 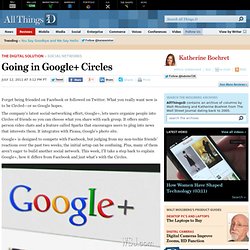 What you really want now is to be Circled—or so Google hopes. The company’s latest social-networking effort, Google+, lets users organize people into Circles of friends so you can choose what you share with each group. How Google+ is built — Tech News and Analysis - Aurora. Google+ fervor may be making Facebook nervous - Computerworld - Aurora. Computerworld - Just two weeks old, Google's social network is generating a tidal wave of curiosity and excitement. 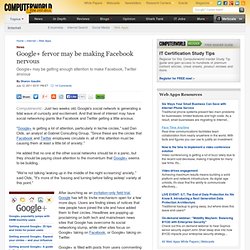 And that level of interest may have social networking giants like Facebook and Twitter getting a little anxious. "Google+ is getting a lot of attention, particularly in techie circles," said Dan Olds, an analyst at Gabriel Consulting Group. "Since these are the circles that Facebook and Twitter employees circulate in, all of this attention must be causing them at least a little bit of anxiety.

" He added that no one at the other social networks should be in a panic, but they should be paying close attention to the momentum that Google+ seems to be building. "We're not talking 'waking up in the middle of the night screaming' anxiety," said Olds, "It's more of the 'tossing and turning before falling asleep' variety at this point. " Wait, AOL has a mobile strategy? AOL’s head of mobile explains. David Temkin, head of mobile at AOL, hit the stage at VentureBeat’s MobileBeat 2011 conference today to clarify the company’s mobile vision. 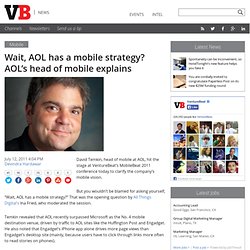 But you wouldn’t be blamed for asking yourself, “Wait, AOL has a mobile strategy?” That was the opening question by All Things Digital’s Ina Fried, who moderated the session. Temkin revealed that AOL recently surpassed Microsoft as the No. 4 mobile destination venue, driven by traffic to AOL sites like the Huffington Post and Engadget. He also noted that Engadget’s iPhone app alone drives more page views than Engadget’s desktop site (mainly, because users have to click through links more often to read stories on phones). AOL has also begun to release new products in mobile before they make their way to desktops. The company is also working on an iPad news reading app dubbed Editions (tagline: “The magazine that reads you.”) Skype: The inside story of the boffo $8.5 billion deal - Fortune Tech - Aurora. How executive shuffles, product changes, and a delayed IPO paid off for a couple of private equity firms. 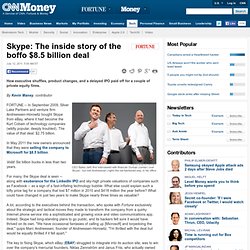 By Kevin Maney, contributor. How Banks Plan To Compete With Groupon - Kashmir Hill - The Not-So Private Parts. Blog.netflix.com/2011/07/netflix-introduces-new-plans-and.html. Jessie Becker, here to share two significant changes at Netflix with you. 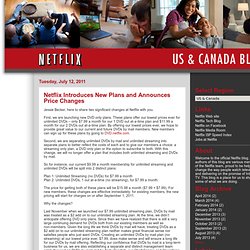 First, we are launching new DVD only plans. These plans offer our lowest prices ever for unlimited DVDs – only $7.99 a month for our 1 DVD out at-a-time plan and $11.99 a month for our 2 DVDs out at-a-time plan. By offering our lowest prices ever, we hope to provide great value to our current and future DVDs by mail members. New members can sign up for these plans by going to DVD.netflix.com. Second, we are separating unlimited DVDs by mail and unlimited streaming into separate plans to better reflect the costs of each and to give our members a choice: a streaming only plan, a DVD only plan or the option to subscribe to both.

Stop Whining: Raising Prices Is The Only Way To Save NetFlix Streaming - Brian Caulfield - Shiny Objects. Netflix's Inevitable Split. Netflix announced this morning that it is changing its pricing structure for DVD and streaming videos. 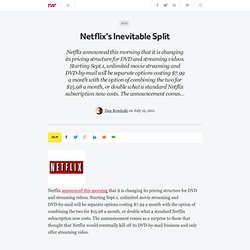 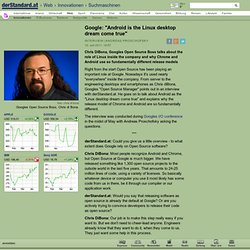 Nowadays it's used nearly "everywhere" inside the company. From server to the engineering desktops and smartphones as Chris diBona, Googles "Open Source Manager" points out in an interview with derStandard.at. He goes on to talk about Android as the "Linux desktop dream come true" and explains why the release model of Chrome and Android are so fundamentally different. The interview was conducted during Googles I/O conference in the midst of May with Andreas Proschofsky asking the questions. Exclusive: Apple chief patent lawyer to leave.