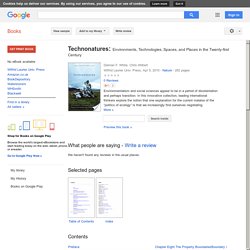 Article Mapping the Margins by Kimblere Crenshaw. Intersectionality. Intersectionality is an important paradigm in academic scholarship and broader contexts such as social justice work or demography, but difficulties arise due to the many complexities involved in making "multidimensional conceptualizations"[3] that explain the way in which socially constructed categories of differentiation interact to create a social hierarchy. 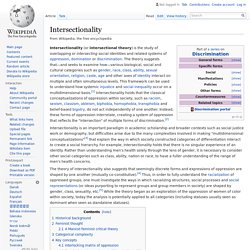 For example, intersectionality holds that there is no singular experience of an identity. Rather than understanding men's health solely through the lens of gender, it is necessary to consider other social categories such as class, ability, nation or race, to have a fuller understanding of the range of men's health concerns. Historical background[edit] The movement led by women of color disputed the idea that women were a homogeneous category essentially sharing the same life experiences. 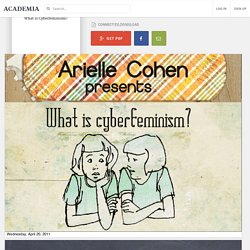 The former explicitly links the new apertures of cyberfeminism toemancipatory perspectives; whilst advocates of the later regard cyberfeminism as navigating a moreradical and less grounded post-feminist/post-human constitution (Gur-Ze’ev 1999: 438)”. “Most cyberfeminists appear to be in accord with situating the putative movement beneath the rubricof postmodernist thought (Haraway, 1991; Wilding 1998; Plant, 1996/1997; Volkart 2002),conceiving it, then, as a ‘compelling component of third wave feminism’ (Gillis 2004: 185), which is tosay that cyberfeminism relates to, and practices, ‘a postmodern policy of self-empowerment thatreaches beyond simple principles of liberation and identity’ (Volkart 2002).

WSQ: Women's Studies Quarterly - Rethinking Cyberfeminism(s): Race, Gender, and Embodiment. "If you can't slap him, snap him," is the tag line for the website HollaBackNYC ( The site's creators, fed up with everyday harassment by men exposing themselves on New York's streets and subways, encourage women to use their Internet-enabled cell phones to snap photos of harassers and upload them to the site. 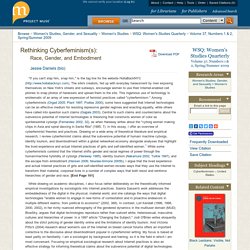 This ingenious use of technology is emblematic of an array of new expression of feminist practices called "cyberfeminism. " Among cyberfeminists (Orgad 2005; Plant 1997; Podlas 2000), some have suggested that Internet technologies can be an effective medium for resisting repressive gender regimes and enacting equality, while others have called into question such claims (Gajjala 2003). While drawing on academic disciplines, I also focus rather deliberately on the theoretically informed empirical investigations by sociologists into Internet practices. Cyberfeminism is neither a single theory nor a feminist movement with a clearly articulated political agenda. 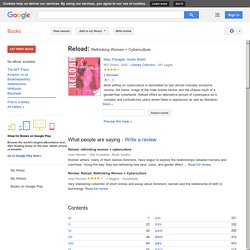 Reload offers an alternative picture of cyberspace as a complex and contradictory place where there is oppression as well as liberation. Engenderings – What was/is cyberfeminism? Part 1. Nicole Shephard is a PhD researcher at the LSE Gender Institute, where she explores the becoming of transnational subjects. 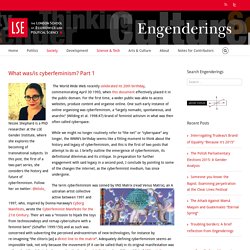 In this post, the first of a two-part series, she considers the history and future of cyberfeminism. Follow her on twitter: @kilolo_ The World Wide Web recently celebrated its 20th birthday, commemorating April 30 1993, when this document effectively placed it in the public domain. For the first time, a wider public was able to access websites, produce content and organise online. One such early instance of online organising was cyberfeminism, a “largely nomadic, spontaneous, and anarchic” (Wilding et al. 1998:47) brand of feminist activism in what was then often called cyberspace. 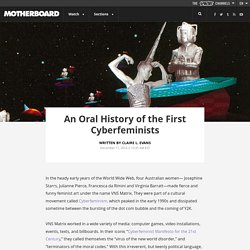 They were part of a cultural movement called ​Cyberfeminism, which peaked in the early 1990s and dissipated sometime between the bursting of the dot com bubble and the coming of Y2K. VNS Matrix worked in a wide variety of media: computer games, video installations, events, texts, and billboards. In their iconic “​Cyberfeminist Manifesto for the 21st Century,” they called themselves the “virus of the new world disorder,” and “terminators of the moral codes.”

With this irreverent, but keenly political language, they articulated a feminist aesthetic of slimy, unpretty, vigilantly nose-thumbing technological anarchy. They coded. While putting together my story for ​Motherboard about Cyberfeminism, I began an email correspondence with the members of VNS Matrix. Still from All New Gen. 030601_Superpatriarchy. Whatever Happened to the Cyborg Manifesto? In 1985, Donna Haraway unveiled ‘The Cyborg Manifesto’, thrilling cultural studies bods, new agers, feminists, and cyberpunks alike with its mix of military, political, laboratory and hippy flavours. 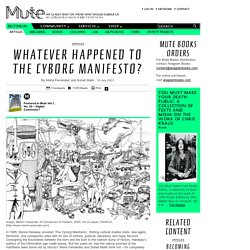 Consigning the boundaries between the born and the built to the rubbish dump of history, Haraway’s politics of the information age made waves. But ten years on, has the radical promise of her manifesto been borne out by history? Maria Fernandez and Suhail Malik think not – for completely opposing reasons. In an era when nearly everything, from small seeds to large computer networks, entails practical or metaphorical organic and machinic fusions, the ‘cyborg’, that product of early Cold War cybernetic theory, and detourned by Haraway a generation later, has lost its political clout.

Haraway’s cyborg, “not of woman born”, the illegitimate offspring of militarism and patriarchal capitalism, was modeled upon the ‘meztisaje’ (racial mixing) of Mexican Americans. Maria Fernandez. The Evolution of Alienation: Trauma, Promise, and the Millennium. Devorah Kalekin-Fishman is a senior researcher at the University of Haifa in Israel. 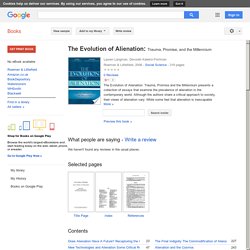 Currently a member of the Executive of the International Sociological Association, she is past president of the ISA committee for Alienation Research and Theory. Dr. Kalekin-Fishman is the editor of the International Sociology Review of Books and serves on the editorial boards of Current Sociology, Intercultural Education, and the Mediterranean Journal of Educational Studies. Recent publications include a critical analysis of Ideology, Policy, and Practice: Education for Immigrants and Minorities in Israel (Kluwer) and an edited volume, Designs for Alienation: Exploring Diverse Realities (Finland: SoPhi Press).

Lauren Langman is a professor of sociology at Loyola University of Chicago. -ect —– a kind of monthly philosophy podcast. -ect presses down hard on the accelerator and hurtles towards our pre-/post-/trans-/in-/non- human future as diagrammed, prophesized and performed by the writings of Nick Land. 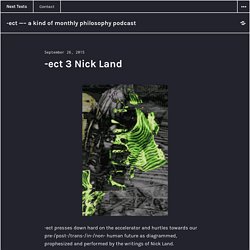 Experimentally staged between two poles of dis/organisation, our exploration will aim to separate out and dramatise the deterritorialising flows constitutive of the early Land’s philosophical system. We will consider why this ‘Dark Deleuzianism’ from the 90s continues to hold such an intoxicating allure, and how it connects to the contemporary Accelerationist turn.

“I’d rather be a Cyborg than a Goddess” The Evolution of Alienation: Trauma, Promise, and the Millennium. -ect —– a kind of monthly philosophy podcast. -ect presses down hard on the accelerator and hurtles towards our pre-/post-/trans-/in-/non- human future as diagrammed, prophesized and performed by the writings of Nick Land. Experimentally staged between two poles of dis/organisation, our exploration will aim to separate out and dramatise the deterritorialising flows constitutive of the early Land’s philosophical system. We will consider why this ‘Dark Deleuzianism’ from the 90s continues to hold such an intoxicating allure, and how it connects to the contemporary Accelerationist turn. Readings Land (1992) Fanged Noumena (passion of the cyclone) Land (1992) Circuitries Land (1993) Machinic desire Land (1994) Meltdown Land (1999) Occultures Land (2014) Teleoplexy Further readings.

-ect 2 Xenofeminism by -ect. -ect —– a kind of monthly philosophy podcast. This month we tinker with the Xenofeminist machine – examining its post-colonial, techno-feminist, trans, queer, cyber-feminist, and accelerationist components. Is it possible to have universality without absolutism? Alienation without oppression? Rationality without patriarchy? And politics without purity? These and other ambitions abound… Whatever Happened to the Cyborg Manifesto? Sadie Plant & Nick Land / Cyberpositive. Sadie Plant and Nick Land: Catastrophe is the past coming apart. Anastrophe is the future coming together. Seen from within history, divergence is reaching critical proportions. Gendered Bodies and New Technologies: Rethinking Embodiment in a Cyber-era - Amanda du Preez. Accelerate-Introduction. #Accelerate: The Accelerationist Reader. The Labor of the Inhuman, Part I: Human.

Reza Negarestani. Dualism (philosophy of mind) René Descartes's illustration of dualism. Notes for Cyborg Manifesto. Theresa M. Senft's reading notes for Donna Haraway's "A Cyborg Manifesto" Below, I attempt to articulate the major ideas of Donna Haraway's "Cyborg Manifesto" for my own pedagogical purposes. Women’s History in the Digital World 2015. It seems unbelievable to me that just two weeks ago, many of us were sitting together in Bryn Mawr’s Thomas Library for the second Women’s History in the Digital World conference. Commodity fetishism. Technofetishism and the Uncanny Desires of A.S.F.R. (alt.sex.fetish.robots) on JSTOR. Science Fiction Studies. Cornelia Sollfrank. Feminist technoscience. The Science Question in Feminism.

Winner of the 1987 Jessie Bernard Award (American Sociological Association)A 1987 Choice Magazine "Outstanding Academic Title" After Accelerationism: The Xenofeminist Manifesto - &&& Journal&&& Journal. It has arrived! The Laboria Cuboniks collective have just released their highly-anticipated manifesto, Xenofeminism: A Politics for Alienation, via their Twitter account.

Scholarship, Research, and Creative Work at Bryn Mawr College - Women's History in the Digital World: Putting the Humanities in Action: Why We Are All Digital Humanists, and Why That Needs to Be a Feminist Project. Vol2_npara_6_13_Wilding.