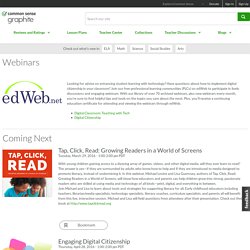 Cultivating a Math Mindset Recorded on Tuesday, February 9, 2016 How can math teachers apply growth mindset principles? 6 Terrific Tools to Transform Your 2016 Recorded on Wednesday, January 20, 2016 Looking for terrific tools to kick off 2016? Using Games to Assess and Personalize Your SEL Instruction Recorded on Wednesday, November 18, 2015 Join Jessica Berlinski, chief impact officer of personalized learning games, in an engaging hour packed with the latest research about and use cases of evidence-based games for social emotional learning (SEL) for students. 5 Earth Science Tools That Support NGSS Recorded on Tuesday, October 27, 2015 Curriculum and Instruction: Building a Better Mousetrap Is leasing a good idea?

Google Apps For Education (GAFE Resources) Educational Leadership:Teaching Screenagers:One-to-One Laptop Programs Are No Silver Bullet. Nearly a decade ago, when school systems began forking over millions of dollars to purchase laptop computers for every student, these programs (often called one-to-one or ubiquitous computing initiatives) were heralded as having the potential to close persistent technology gaps. 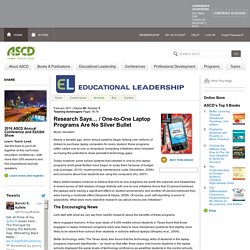 Today, however, some school systems that ushered in one-to-one laptop programs amid great fanfare have begun to scrap them because of budget cuts (Lemagie, 2010); mushrooming maintenance costs (Vascellaro, 2006); and concerns about how students are using the computers (Hu, 2007). Many district leaders continue to believe that one-to-one programs are worth the expense and headaches. A recent survey of 364 leaders of large districts with one-to-one initiatives found that 33 percent believed the laptops were having a significant effect on student achievement, and another 45 percent believed they were having a moderate effect (Greaves & Hayes, 2008).

Why Schools Must Move Beyond One-to-One Computing. Perhaps it was the driving rain and the dark grey clouds of an approaching storm that contributed to the superintendent’s choice of words. 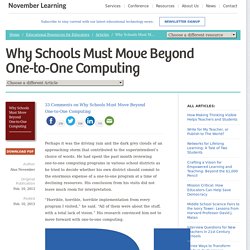 He had spent the past month reviewing one-to-one computing programs in various school districts as he tried to decide whether his own district should commit to the enormous expense of a one-to-one program at a time of declining resources. His conclusion from his visits did not leave much room for interpretation. “Horrible, horrible, horrible implementation from every program I visited,” he said. “All of them were about the stuff, with a total lack of vision.” His research convinced him not to move forward with one-to-one computing. With this absolute conclusion that one-to-one computing can lead to a waste of precious resources—including dollars and time—hanging in the air, he then asked me my thoughts on the issue.

The importance of BYOT. Bring Your Own Technology (BYOT) is critical in the digital evolution of schools, when normalising whole school use of the digital, and when shaping digitally-based school ecosystems. 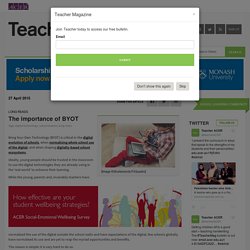 Ideally, young people should be trusted in the classroom to use the digital technologies they are already using in the ‘real world’ to enhance their learning. While the young, parents and, invariably teachers have normalised the use of the digital outside the school walls and have expectations of the digital, few schools globally have normalised its use and are yet to reap the myriad opportunities and benefits.

The reason is simple: it is very hard to do so. It requires each school to move from the paper-based operational mode and mindset, to a mode that is digitally-based, where the school culture actively supports change, risk-taking and ongoing organisational evolution and transformation. Edwebet76 - BYOD or 1:1 PD. BYOD. ASCD Whole Child Podcasts. Literacy Design Collaborative ASCD. Free Professional Development Webinars for Educators from edWeb.net.