Mr Thiel and Mr Levchin are two prominent members of what some call the "PayPal Mafia. " This is a large number of unbelievably successful entrepreneurs; the Paypal alumni have gone on to help found an extraordinary number of successful startups. The first time I met Messrs Thiel and Levchin I was working at the Financial Times, not long before the PayPal IPO. Why PayPal helped spawn great entrepreneurs. Many people, including Vator's Bambi Francisco, refer to PayPal as the quintessential example of a company that pivoted before pivoting and agile development were popular movements. 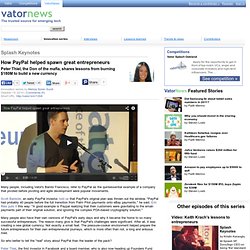 Scott Banister, an early PayPal investor, told us that PayPal's original plan was thrown out the window. "PayPal had probably 40 people before the full transition from Palm Pilot payments onto eBay payments," he said. Eric Ries puts it this way: "A good example is Paypal realizing that their customers were gravitating to the email-payments part of their original solution, and ignoring the complex PDA-based cryptography solution. " Many people also have their own versions of PayPal's early days and why it became the home to so many successful entrepreneurs. The reason many give is that PayPal's challenges were significant. MoneyBall for Startups: Invest BEFORE Product/Market Fit, Double-Down AFTER. My apologies... this is a long piece (~2500 words). 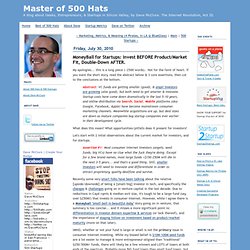 Not for the faint of heart. If you want the short story, read the abstract below & 3 core assertions, then cut to the conclusions at the bottom. Abstract: VC funds are getting smaller (good), & angel investors are growing (also good), but both need to get smarter & innovate. The Stunning Achievements Of PayPal Alumni... Posted by Tom Foremski - August 5, 2010 Sarah Lacy reports: ... 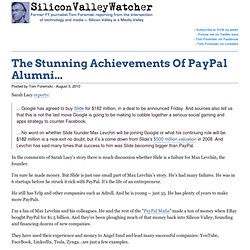 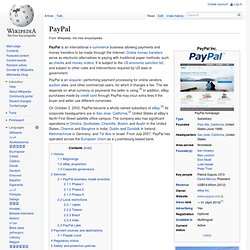 Online money transfers serve as electronic alternatives to paying with traditional paper methods, such as checks and money orders. It is subject to the US economic sanction list, and subject to other rules and interventions required by US laws or government. The PayPal mafia - Nov. 14, 2007. (Fortune Magazine) -- A door opens, and a blond man appears in a white jacket with large buttons. 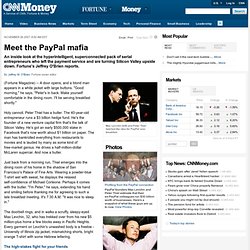 "Good morning," he says. "Peter's in back. Make yourself comfortable in the dining room. I'll be serving breakfast shortly. " Holy cannoli. Just back from a morning run, Thiel emerges into the dining room of his home in the shadow of San Francisco's Palace of Fine Arts. Max Levchin. Max Rafael Levchin (Ukrainian: Максиміліан Левчин Maksymilian R. 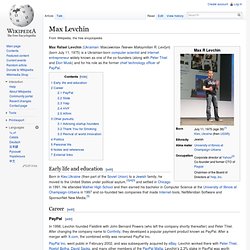 Levčyn) (born July 11, 1975) is a Ukrainian-born computer scientist and internet entrepreneur widely known as one of the co-founders (along with Peter Thiel and Elon Musk) and for his role as the former chief technology officer of PayPal. Early life and education[edit] Born in Kiev,Ukraine (then part of the Soviet Union) to a Jewish family, he moved to the United States under political asylum,[3][4][5] and settled in Chicago in 1991.

Follow Your Curiosity, Interview With Max Levchin of Slide.com. A few days, invited by Slide.com Shanghai, I had a great pleasure to have the chance to interview with Max Levchin, who co-founded Paypal in 1998 then sold it to eBay for more than $1.5 billion at the age of 26. Now he is the CEO and visionary behind Slide.com, the largest social entertainment company in the world and developer of the most engaging applications on social networks. The interview took only 20min or so, but it covers different topics, such as Slide, Slide China, geek culture, spirit of geeks, view on Chinese startup environment, how geeks should do business etc. The following is the highlights. (Note: part of the interview will be co-published on Founders magazine in Chinese.)

Hope you will enjoy it. 1. About. Reid Hoffman. Reid Garrett Hoffman[2] (born August 5, 1967) is an American entrepreneur, venture capitalist and author. Hoffman is best known as the co-founder of LinkedIn, a social network used primarily for business connections and job searching. Early life and career[edit] Hoffman says that in college he formed a conviction that he wanted to try to influence the state of the world on a large scale.[6] He saw academia as an opportunity to make an "impact", but later realized that an entrepreneurial career would provide him with a larger platform.

"When I graduated from Stanford my plan was to become a professor and public intellectual. Peter Thiel. Peter Andreas Thiel (born October 11, 1967) is an American entrepreneur, venture capitalist, and hedge fund manager. 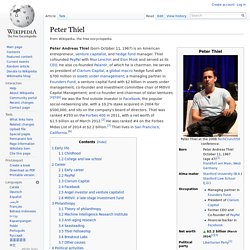 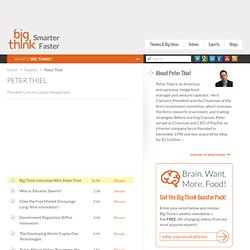 He is Clarium’s President and the Chairman of the firm’s investment committee, which oversees the firm’s research, investment, and trading strategies. Before starting Clarium, Peter served as Chairman and CEO of PayPal, an Internet company he co-founded in December 1998 and was acquired by eBay for $1.5 billion …in October 2002. Prior to founding PayPal, Peter ran Thiel Capital Management , the predecessor to Clarium, which started with $1 million under management in 1996. Peter began his financial career as a derivatives trader at CS Financial Products, after practicing securities law at Sullivan & Cromwell.

Elon Musk. Elon Musk (/ˈiːlɒn ˈmʌsk/; born 28 June 1971) is a South African-born Canadian-American business magnate, investor and inventor.[5][6] He is currently the CEO & CTO of SpaceX and CEO & Chief Product Architect of Tesla Motors.[7] He was an early investor of multiple companies, most notably SpaceX, PayPal, and Tesla Motors.[8][9] Early life and education[edit] Musk was born in Pretoria, South Africa in 1971, to a Canadian mother and a South African-born British father.[10][11][12] Elon taught himself computer programming and at age 12 sold the computer code for a video game called Blastar for $500.[13] Career[edit] 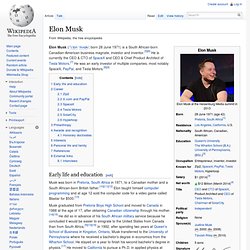 Entrepreneur of the Year, 2007: Elon Musk of Tesla Motors, Space. Watching Elon Musk at work is an exercise in controlling your urge to buy a man a drink. Make that several drinks. Musk is 36 years old, wicked smart, worth several hundred million dollars, and built like a tight end--thickset through the middle and well over 6 feet tall. Yet he never looks quite comfortable.

Sitting in front of the oversize computer screen on his desk, he rolls back and forth in his chair, slouches and unslouches, rubs his temples, raps his fingers, and plays with his wedding ring. When he sighs, which he does frequently, his chest heaves, and his eyes widen, like someone confronted with news of his own death. It's not that Musk is an unpleasant guy. Jared Kopf. Tech’s Best Young Entrepreneurs. Jared Kopf's AdRoll Rolls Out of Private Beta - Plus An SVW AdRo. Posted by Tom Foremski - April 15, 2008 I've been a fan of the astonishingly young and talented Jared Kopf for a while, ever since I met him several years ago when he was working with the astonishingly young and talented Max Levchin at Slide.com, (and part of the Odessa mafia :-). Jared is smart much smarter than his years (and many peers) and he has already paid a lot of dues. For the past two years Jared has been working on a new project the launching of AdRoll, an advertising network that seeks to link up advertisers with community-specific networks of small online publishers.

Normally I'm not a big fan of advertising networks. They charge too much and they are not a defensible business because online publishers can potentially handle their own advertising once they reach a certain size. But AdRoll could turn out differently. AdRoll today emerged from private beta and is now in public beta. Media buyers like to buy large numbers of the same type of audience. Challenges... Dave McClure. Kieth Rabois. Jawed Karim. Eric M. Jackson. Roelof Botha. Roelof F. David O. Sacks. Yammer Founder On PayPal: Understanding The Power Of Virality... Posted by Tom Foremski - October 28, 2010. Sanjay Bhargava. Jeremy Stoppelman's Blog. Luke Nosek. Luke Nosek is a Polish-born American entrepreneur. Nosek received a B.S. in Computer Science from the University of Illinois at Urbana-Champaign.[2] In the summer of 1995, while still in college, he co-founded SponsorNet New Media, Inc., along with fellow UIUC students Max Levchin and Scott Banister.

Nosek then worked for Netscape Communications Corporation. Ken Howery. Ken Howery is a co-founder and partner at Founders Fund, a San Francisco based venture capital firm with over $1 billion under management. Career[edit] Howery graduated from Stanford University in 1998 with a B.A. in economics. Premal Shah. Premal Shah is president of Kiva.org and is a leading social entrepreneur.[1][2] Amy Klement. Photo: Eric Millette. Steve Chen (YouTube) Chad Hurley.