I'm a journalist writing about technology and media.

Gastronomy. No. News reader. Toxoplasmosis. SEO. Famous Authors’ Funniest Responses to Their Books Being Banned. As you might have already heard, it’s Banned Books Week, and booksellers, librarians, and literary critics of all kinds are taking the opportunity to celebrate their favorite once-banned (or oft-banned) literature. 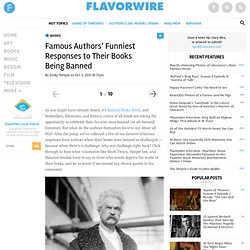 But what do the authors themselves have to say about all this? After the jump, we’ve collected a few of our favorite hilarious responses from authors when their books were banned or challenged — because when there’s a challenge, why not challenge right back? 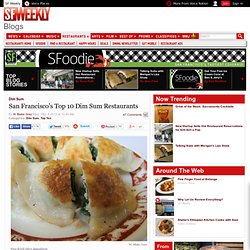 Waitresses keep offering you tidbits of pork and shrimp, your endless pot of tea gets refilled without asking if you leave the lid up (there's a veteran tip), and at almost every place on this list, six people can eat until you're bored, full or both for less than $20 a person. San Francisco ain't Hong Kong or Singapore, but for dim sum outside of Chinese-speaking metropoli, we've got it pretty good.

TEDxBerkeley 2012. OccupyWallStreet. On his deathbed did Steve Jobs regret his time at the office? My Work. Quirky/Great Content. My Life.