Jaden Smith Wears Skirt in New Louis Vuitton Campaign. Gucci - Autumn/Winter 2015-16 Menswear - Milan. The Fall of the Alpha Male. Professor Eric Anderson, author of Inclusive Masculinity: The Changing Nature Of Masculinities, believes that, despite its traditional supremacy in the animal kingdom, the ‘alpha’ type is not necessarily the most natural form of manliness for highly evolved human beings. 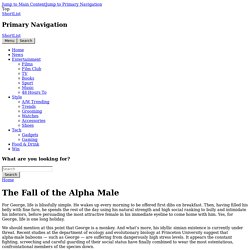 “Men are emotional creatures,” he tells ShortList. “We like to cry, we like to bond with our mates, we enjoy physical tactility. Gender—and color—blind casting catches on. BULLOCK Her character in “Our Brand is Crisis” was originally written for a male actor. 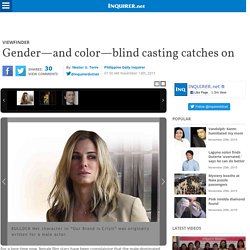 For a long time now, female film stars have been complaining that the male-dominated entertainment industry has a decided preference for “masculine” stories and protagonists, leaving actresses little to do except to provide the heroic leads’ “love interest.” This season, however, some female stars have gone beyond complaining, and have actually done something to rectify the onerous situation. They are led by Sandra Bullock, whose latest film role in “Our Brand is Crisis” was originally written for a male actor.

She used her considerable clout as one of Hollywood’s most bankable female leads (“Gravity,” “Speed”) to convince producers that the project would do just as well, if not better, with her portraying the protagonist, as a woman. In the topical drama, Bullock’s character is a top political image-maker who is hired to make a Bolivian candidate win. Previous attempts. Why Changing Gender Roles Mean the 21st Century Is the Best Time to Be a Man  HuffPost UK is running a month-long focus around masculinity in the 21st Century, and the pressures men face around identity. 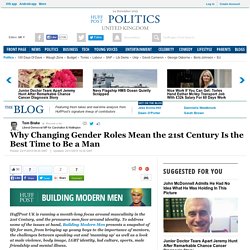 To address some of the issues at hand, Building Modern Men presents a snapshot of life for men, from bringing up young boys to the importance of mentors, the challenges between speaking out and 'manning up' as well as a look at male violence, body image, LGBT identity, lad culture, sports, male friendship and mental illness.

Target announces plan to drop gender labels from children's toys. A little more than two months after the Internet exploded over Target’s gendered toy section, the mega-retailer is changing its tune. 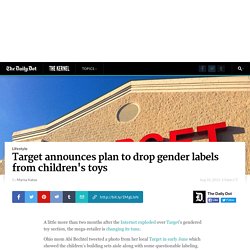 Ohio mom Abi Bechtel tweeted a photo from her local Target in early June which showed the children’s building sets aisle along with some questionable labeling. Others from around the country shared photos from their local stores, which showed similarly problematic labeling, and we found their website was also broken down by “boys building sets” and “girls building sets. " The new masculinity. Cheikouna and El Hadji wear all clothing Grace Wales Bonner. 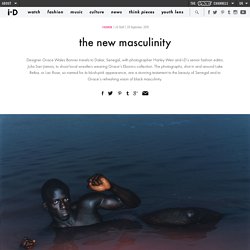 Accessories and shoes models' own. Karim wears all clothing model's own. Headpiece Grace Wales Bonner. Moussa wears necklace Grace Wales Bonner. How 'Master Of None' Subverts Stereotypical Masculinity By Totally Ignoring It. Who are the most "masculine" characters on television right now? 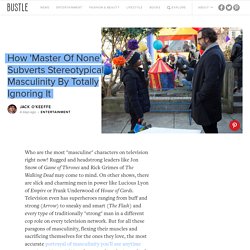 Rugged and headstrong leaders like Jon Snow of Game of Thrones and Rick Grimes of The Walking Dead may come to mind. Stay-at-home fathers find support in National At-Home Dad Network. Commercials like the recent Dove Super Bowl ad are just one sign of the powerful bond between dads and their kids. 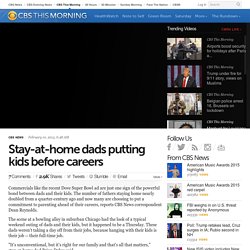 The number of fathers staying home nearly doubled from a quarter-century ago and now many are choosing to put a commitment to parenting ahead of their careers, reports CBS News correspondent Dean Reynolds. The lads mag is dead. The fragility of masculinity. On September 23, the hashtag #MasculinitySoFragile trended on Twitter, a small movement underscoring the insecurity of masculinity in modern society. 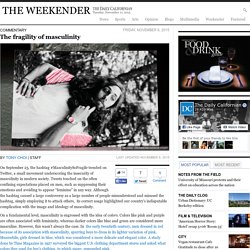 Tweets touched on the often confining expectations placed on men, such as suppressing their emotions and avoiding to appear “feminine” in any way. Although the hashtag caused a large controversy as a large number of people misunderstood and misused the hashtag, simply employing it to attack others, its correct usage highlighted our country’s indisputable complication with the image and ideology of masculinity. On a fundamental level, masculinity is engrossed with the idea of colors. Colors like pink and purple are often associated with femininity, whereas darker colors like blue and green are considered more masculine. A third wave of feminism is rising – and here's why we need to surf it now. We are witnessing the beginning of a third wave of feminism. 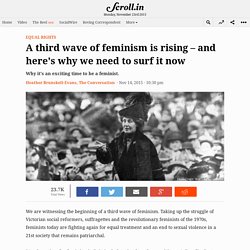 Taking up the struggle of Victorian social reformers, suffragettes and the revolutionary feminists of the 1970s, feminists today are fighting again for equal treatment and an end to sexual violence in a 21st society that remains patriarchal. It’s a busy time for feminists in Britain. In late October, the new Women’s Equality Party launched its policy programme. It is pressing for equal representation in politics, business, and industry; equal pay and equal parenting; equal treatment of women by and in the media; and an end to sexual violence. A few days after attending the launch, I went to the Feminism in London conference, which attracted over a thousand women and men who had come to listen to an array of speakers talking about issues as diverse as trafficking for domestic labour, equality and austerity, and the campaign for 50:50 representation in parliament.

A brief history of feminist time.