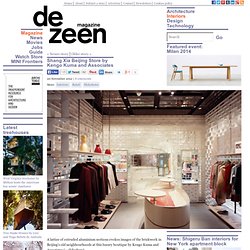 Three different H-shaped sections and two sizes of I-shaped section have been built up in layers to divide the space into a series of linked rooms. The edges of the partitions are staggered so that openings between each area are softened and the profiles can be seen more clearly. HITGallery Hong Kong by Fabio Novembre. Two giant blue busts face each other across this Hong Kong boutique by Italian designer Fabio Novembre (+ slideshow). 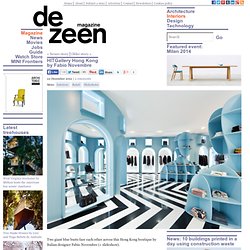 Novembre designed the interior of the HIT Gallery concept store, a branch of Italian retail group Ittiere, as a contemporary interpretation of a piazza. "The HITGallery stores we plan to open around the globe will capture the essence and spirit of Italy in wonderful new ways," he explains. Baker D Chirico by March Studio. Slideshow: Australian practice March Studio conceived this Melbourne bakery as an oversized breadbasket. 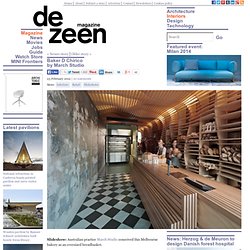 The undulating wooden slats that cover the rear wall and ceiling of the shop function as shelves for storing and displaying breads of different shapes and sizes. A wooden chopping board spans the length of the bakery to create a countertop with integrated pockets for scales, knives, crumb-catchers and checkouts. 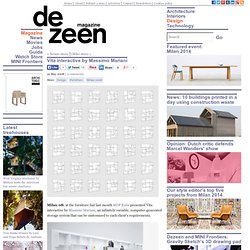 A specially developed computer program is used to generate an infinite number of configurations based on modules of 600x600mm, with variable shelf depths and orientations. The configuration can then be accessed and adjusted by the customer on the internet. Aesop Tiquetonne by Ciguë. Glass bottles rest on rows of hand-made iron nails along the walls of this Aesop skin and haircare shop in Paris by French designers Ciguë (+ slideshow). 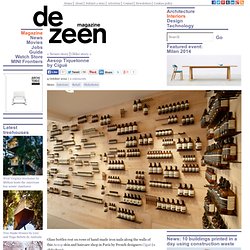 Located in one of the city's oldest neighbourhoods, Aesop Tiquetonne was inspired by old-fashioned workshops and garages, where tools are often fixed to the walls with hooks or nails. Architect Hugo Haas told Dezeen that he had bought the nails during a visit to Japan, and had decided later to use them to create an entire shelving system. "The main idea with Aesop is to find different ways of displaying their products," said Haas. Weinhandlung Kreis wine shop interior by Furch Gestaltung + Production. Wine bottles are displayed in rainbow-coloured cages in this wine shop in Stuttgart, Germany, by local studio Furch Gestaltung + Produktion (+ slideshow). The branch of Weinhandlung Kreis had no storage area, so Furch Gestaltung + Production was asked to squeeze 12,000 bottles of wine into the 70-square-metre space. 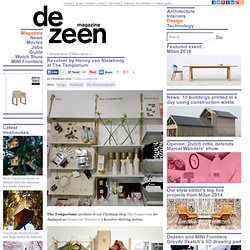 The folded metal shelves simply hook onto the wooden supports and can be flipped over to provide deep, flat platforms or shallow, slanted shelves as required. The shelves are available to order at The Temporium, which is open until Christmas Eve - see more stories about products for sale here. Here are some more details from van Nistelrooy: ‘Revolver’ is a display and storage system based on a simple reversible shelf design. Due to its subtle elegance and great flexibility to display both objects and garments, this shelving system is ideal for either public or domestic environments. Sotto Sotto by HRC Design Works. Architecture and design studio HRC Design Works has transformed an ageing warehouse beside the HuangPu River in Shanghai into a leisure and shopping destination with a plant-covered cafe and a cave-like shoe store. 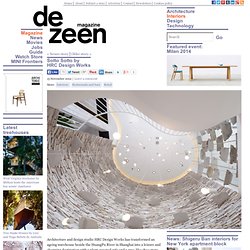 Sotto Sotto is positioned beside the old dock in the South Bund district and HRC Design Works designed the building as an attraction that would bring new visitors to the area whilst respecting the history of the converted building. The architects used raw materials such as stone, copper and unfinished wood to make connections with nature in each space, as well as to respect the existing structure. "We'd rather have pure original structure than style," they explain. The new spaces include shops, cafes and wine bars, as well as a cigar lounge and reception area. HRC Design Works founded their studio in Singapore, but moved back to Shanghai in 2009. Musashino Art University Libraryby Sou Fujimoto Architects.

Photographer Edmund Sumner has sent us these photographs of a university library in Tokyo by Japanese architect Sou Fujimoto that has an exterior of timber shelves covered by planes of glass. 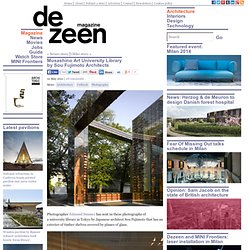 The massing of the two-storey library at Musashino Art University is composed entirely from the shelves, which will hold the books. Circulation routes spiral around both ground and first floor between apertures cut-out of the shelving. The library also includes a closed archive, which is located in the basement. Aesop Le Marais by Ciguë. Skincare products at Aesop's latest store in Paris are displayed on 427 steel caps that would normally be used in the city's plumbing network. 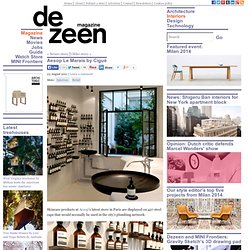 Designed by Parisian studio Ciguë, the shop is located in the winding streets of the historically aristocratic Le Marais district. The wall-mounted dishes are filled with clear resin to form a flat surface and finished in varying degrees of blackened, rusted and stripped steel. Larger plumbing caps create basins in the polished concrete counters. The cast iron spotlights, steel window frames and plant pots in the courtyard beyond were all custom-designed by Ciguë. Aesop at I.T Hysan One by Cheungvogl. Translucent boxes propped up on a forest of steel rods display products by skincare brand Aesop at a Hong Kong fashion store. 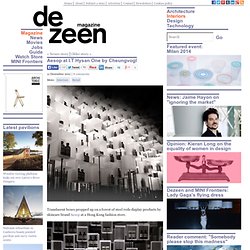 Designed by architects Cheungvogl, the monochrome display at I.T Hysan One was inspired by a black and white photograph of floating lanterns. The supporting rods become taller towards the back, so the 800 resin boxes appear to be stacked into a tower. Australian brand Aesop are renowned for creating unusual displays for their products - see more of their stores here. Aesop Newbury Street by William O’Brien Jr. Cornices are commonly used to decorate the junctions between walls and ceilings, but at the new Boston shop for skin and haircare brand Aesop, cornices cover the walls and form shelves for the brand's signature brown bottles.

Designed by architect and university professor William O’Brien Jr, the Aesop Newbury Street's interior was inspired by the nineteenth century ornamental architecture that originated in Paris and is common in the neighbourhood. The oak mouldings are arranged in horizontal rows across each of the walls, as well as along the edges of the counter. "The display shelves are formed through the accumulation of several different custom crown mouldings to produce an unexpected texture, one that defamiliarises the moulding and transforms its role from an architectural element that conventionally highlights edges to an element that produces a rich and varied surface texture," explained O’Brien Jr. Aesop Fillmore Street by NADAAA. Reclaimed timber boxes are piled up to the ceiling to create a wall of shelves at the new San Francisco store for skin and haircare brand Aesop (+ slideshow).

Designed by Boston architects NADAAA, Aesop Fillmore Street draws inspiration from pre-twentieth century apothecaries, where assorted bottles and tubes would be displayed on a jumble of wall-mounted shelves. The boxes were made to measure using reclaimed wooden boards, which were sanded on one side to create a variation between the inside and outside surfaces. Architect Nader Tehrani explained: "Aesop has carefully considered dimensions of products as well as a clear methodology of display and presentation. We used these measurements as a means to create and array the boxes to best fulfill the quantity and types of products. " Due to the limited width of the store, the boxes are only located on one wall to prevent narrowing the room and they also integrate a wooden counter with two basins.