Grow your own food security? Integrating science and citizen science to estimate the contribution of own growing to UK food production - Edmondson - - PLANTS, PEOPLE, PLANET - Wiley Online Library. Urban agriculture is increasingly recognized as an important contributor to the sustainability and resilience of cities by policy‐makers from local through to transnational levels of governance. 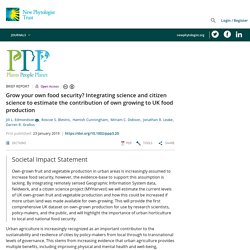 This stems from increasing evidence that urban agriculture provides multiple benefits, including improving physical and mental health and well‐being, reconnecting urban dwellers with primary food production, and it is widely assumed to increase food security (Goldstein, Hauschild, Fernandez, & Birkved, 2016; Martin, Clift, & Christie, 2016). Initiatives such as the 2015 Milan Urban Food Policy Pact, now signed by 165 cities, include specific goals to “promote and strengthen urban and peri‐urban food production” as part of an overarching aim to develop more sustainable food systems and promote healthy diets. AI adjusts for gaps in citizen science data. Citizen science is a boon for researchers, providing reams of data about everything from animal species to distant galaxies. 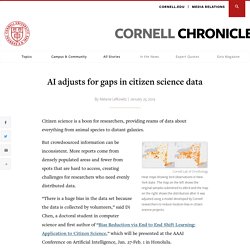 But crowdsourced information can be inconsistent. More reports come from densely populated areas and fewer from spots that are hard to access, creating challenges for researchers who need evenly distributed data. 'Citizen science' yields updated predicted distributions for rare species. Online "citizen science" data initiatives may be able to help map the distribution of rare species in the wild, according to a study published August 8 in the open access journal PLOS ONE by Yifu Wang of McGill University and colleagues. 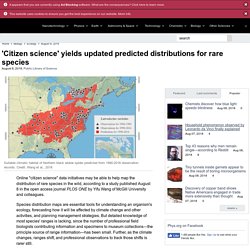 Species distribution maps are essential tools for understanding an organism's ecology, forecasting how it will be affected by climate change and other activities, and planning management strategies. But detailed knowledge of most species' ranges is lacking, since the number of professional field biologists contributing information and specimens to museum collections—the principle source of range information—has been small. Further, as the climate changes, ranges shift, and professional observations to track those shifts is rarer still. Citizen Science and Climate Change: Mapping the Range Expansions of Plants with Leafsnap. 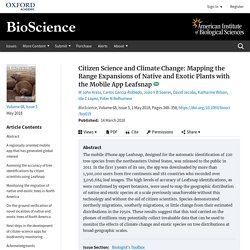 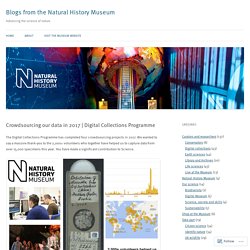 We wanted to say a massive thank-you to the 2,000+ volunteers who together have helped us to capture data from over 15,000 specimens this year. You have made a significant contribution to Science. Crowdsourcing our data in 2017 We can digitally image individual microscope slides at a rate of up to 1000 slides per day, but we still need help with capturing the label information on each slide. New Study Finds Citizen Scientists Can Be Very Accurate. 24 4ShareNew Between 2010 and 2013, the website Snapshot Serengeti presented citizen scientists with the opportunity to help organize more than 1.2 million images (including some hilarious animal selfies) captured by a camera trap in Serengeti National Park in Tanzania. 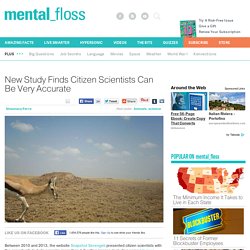 These volunteers helped identify which images in the dataset contained animals and classified the species pictured, the number of animals, and any behaviors on display. A new analysis of the work of these citizen scientists shows that trusting untrained strangers with scientific data isn’t a terrible idea. As the study in Conservation Biology notes, overall, volunteers classified 98 percent of the images accurately, based on a comparison with expert answers.

On average, 27 volunteers viewed each image, but even the images that were classified by only five volunteers were labeled accurately 90 percent of the time. All images via Snapshot Serengeti. Citizen science data reveal tree-fungal interactions. Go down to the woods today, and it won’t just be trees that you see, but a woody world inhabited by a diverse range of organisms, including insect herbivores, pollinators, epiphytes, mycorrhizal fungi and fungal pathogens. 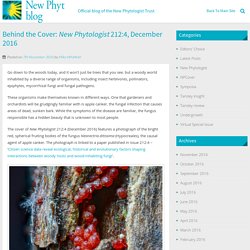 These organisms make themselves known in different ways. One that gardeners and orchardists will be grudgingly familiar with is apple canker, the fungal infection that causes areas of dead, sunken bark. Contagious Contributions: The Rewards of Asking for Help. What happens when an organization turns to the Internet 'crowd' for help to make its online collections as accessible as possible? 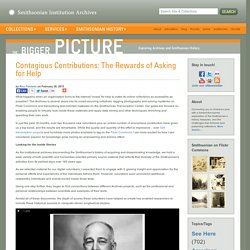 The Archives is several years into its crowd-sourcing initiatives: tagging photographs and solving mysteries on Flickr Commons and transcribing text-oriented materials on the Smithsonian Transcription Center. The Serendipitous Discovery of Susan Fereday: A Story about the Impact of Citizen Science. By Siobhan Leachman BHL Citizen Scientist (Learn more) Twitter: @SiobhanLeachman I love volunteering for the Biodiversity Heritage Library. 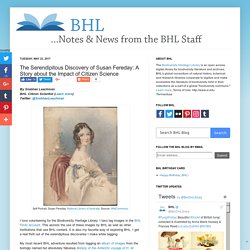 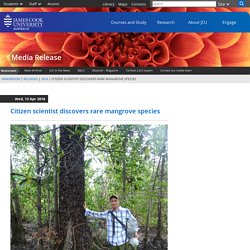 Local explorer, Hidetoshi Kudo made the remarkable discovery of Haines Orange Mangrove (Bruguiera hainesii). The species is largely unknown in the southern hemisphere, and has never been recorded in Australia. It is listed as rare and endangered on the IUCN Red List, and according to the records, less than 200 of the plants had previously been found on the planet. Dr Norm Duke, an international mangrove scientist with TropWATER at James Cook University, said Mr Kudo found another 50 of the rare mangroves in Cairns. Fibonacci citizen science. Powdery Mildew Survey 2016. Now entering its third year the powdery mildew citizen science scheme is gaining more momentum, more followers, and more samples. Can we hope for more again this year? The inaugural 2014 Powdery Mildew Survey produced a total of 160 powdery mildew samples resulting in 51 different species. This was followed in 2015 by a further 353 samples: 54 species.

The study was published in the open access journal PhytoKeys. WeDigFlowering I complete.