Harmony Grove - History of Early American Landscape Design. Harmony Grove, an estate in London Grove Township, Chester County, Pennsylvania, was the site of a botanic garden established by the self-taught botanist John Jackson (1748–1821) in the mid 1770s and preserved by successive generations of his family, several of whom shared an interest in botany. 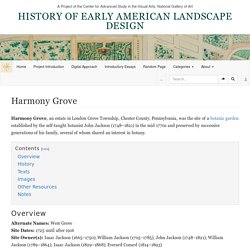 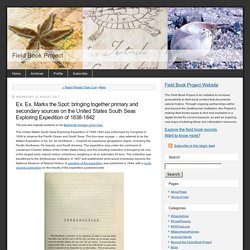 The United States South Seas Exploring Expedition of 1838-1842 was authorized by Congress in 1836 to observe the Pacific Ocean and South Seas. The four-year voyage — also referred to as the Wilkes Expedition or Ex. Ex. for shorthand — covered an expansive geographic region, including the Pacific Northwest, Fiji Islands, and South America. The Worcester Country Horticultural Society. In the fall of 1840, in Worcester, Massachusetts, two dozen attendees of the Worcester Agricultural Society's Annual Cattle Show put on a display of local fruits and flowers. 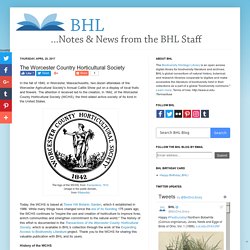 The attention it received led to the creation, in 1842, of the Worcester County Horticultural Society (WCHS), the third oldest active society of its kind in the United States. Today, the WCHS is based at Tower Hill Botanic Garden, which it established in 1986. While many things have changed since the era of its founding 175 years ago, the WCHS continues to "inspire the use and creation of horticulture to improve lives, enrich communities and strengthen commitment to the natural world. " The history of this effort is documented in the Transactions of the Worcester County Horticultural Society, which is available in BHL's collection through the work of the Expanding Access to Biodiversity Literature project.

Thank you to the WCHS for sharing this valuable publication with BHL and its users. Bacteria Help the Cobra Lily Subdue Prey — In Defense of Plants. The aptly named cobra lily (Darlingtonia californica) is one of North America's most stunning pitcher plants. 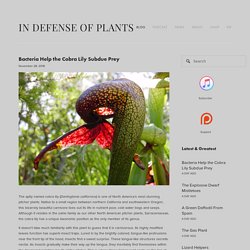 Native to a small region between northern California and southwestern Oregon, this bizarrely beautiful carnivore lives out its life in nutrient poor, cold water bogs and seeps. Although it resides in the same family as our other North American pitcher plants, Sarraceniaceae, the cobra lily has a unique taxonomic position as the only member of its genus. It doesn't take much familiarity with this plant to guess that it is carnivorous.

William Darlington letters to Asa Gray, 1836-1862 (inclusive) An obituary notice of Dr. William Darlington, read before the ... - Full View. Naval History Blog » Blog Archive » The Wilkes Exploring Expedition Discovers the Antarctic Coast in January 1840. “The Wilkes Exploring Expedition: Its Progress Through Half a Century” was originally published in the September/October 1914 issue of Proceedings magazine by Louis N. 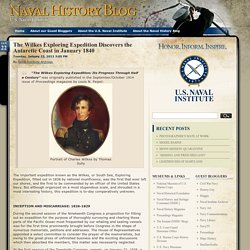 Feipel: Portrait of Charles Wilkes by Thomas Sully The important expedition known as the Wilkes, or South Sea, Exploring Expedition, fitted out in 1838 by national munificence, was the first that ever left our shores, and the first to be com­manded by an officer of the United States Navy. But although organized on a most stupendous scale, and shrouded in a most in­teresting history, this expedition is to-day comparatively unknown. William Darlington (1782 - 1863) - Find A Grave Photos. History's People: Graceanna Lewis - Abolitionist to Natural Scientist. Graceanna Lewis was born in 1821 into a remarkable Quaker family in West Vincent Township. 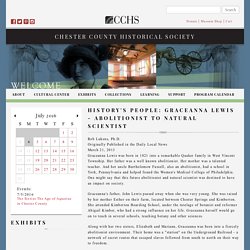 Her father was a well known abolitionist. Her mother was a talented teacher. And her uncle Bartholomew Fussell, also an abolitionist, had a school in York, Pennsylvania and helped found the Women's Medical College of Philadelphia. One might say that this future abolitionist and natural scientist was destined to have an impact on society. Graceanna's father, John Lewis passed away when she was very young. Along with her two sisters, Elizabeth and Mariann, Graceanna was born into a fiercely abolitionist environment.

According to William Still's "The Underground Railroad" (1872) Graceanna and her sisters learned to despise the institution of slavery at age four or five. From a young age into adulthood, Graceanna and her family participated in a variety of Underground Railroad activities. The stories of runaway slaves are extraordinary lessons in resolve and determination. Darlington Library Texts. An obituary notice of Dr. William Darlington, read before the ... - Full View. Exercises in memory of Humphry Marshall and William Darlington, ... - Full View. Bulletin of Friends' Historical Association-Volume 24, Number 2, Autumn 1935. Historic Letter Collection, 1796-1940 (inclusive). John Torrey letters, 1831-1873. John Torrey Papers (PP) 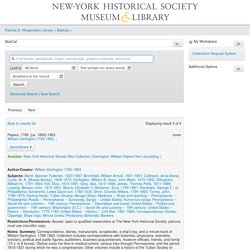 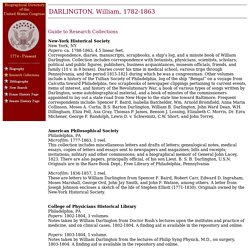 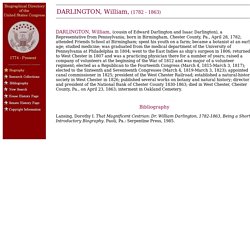 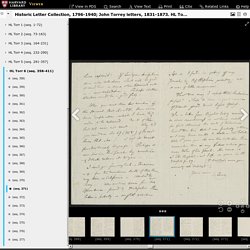 Historic Letter Collection, 1796-1940 (inclusive). John Torrey letters, 1831-1873. William Darlington. William Darlington by John Neagle ca-1825 William Darlington (April 28, 1782 – April 23, 1863), was an American physician, botanist, and member of the U.S. House of Representatives from Pennsylvania.[1]:67 William Darlington (cousin of Edward Darlington and Isaac Darlington, second cousin of Smedley Darlington) was born in Birmingham, Chester County, Pennsylvania. He attended Friends School at Birmingham and spent his youth on a farm.[2] He became a botanist at an early age, studied medicine, and graduated from the medical department of the University of Pennsylvania at Philadelphia in 1804. He went to the East Indies as ship’s surgeon in 1806. Farlow Reference Library of Cryptogamic Botany. Library of the Gray Herbarium Back to Main Historic Letters Page. Archives of the Gray Herbarium.

Library of the Gray Herbarium Back to Main Historic Letters Page | Gray Herbarium Archives Home Page | | Botany Libraries Home Page | Harvard University Herbaria Home Page | Carnivorous Plants. To find articles of interest, select the range of volumes, select the search field, type in what you are looking for, and click Search. The search will return what it finds in the specified search field that contains ALL the words you type. If you are unsure about a word, just enter part of it. To view an article available in the archive make sure the check box is selected. Articles less than three years old may not be available. To generate a table of contents for an issue, select the volume and issue. Examples of an article search: To find all the articles that mention Sarracenia alabamensis or Sarracenia rubra ssp. alabamensis, select "species" and enter something like "sarr alabam". To find all the "Botanist's Corner" and "Beginner's Corner" articles, select "title" and enter "corner".

Plant Name Details. Sarraceniaceae Chrysamphora californica Greene Pittonia 2: 191. 1891 Links: nomenclatural synonym:Sarraceniaceae Darlingtonia californica Torr. in Smithson. Contrib. Knowl. 6(4): 5. 1853 [Apr 1853] NorthwesternAmericanPlants. Eugene, Oregon. Botany Collections Search. Enter your keywords separated by spaces and click Search. Records that match your search terms will be returned. You can join terms with OR to match any, e.g. guam OR palau You can include the terms image(s) or type(s) to find records that have images or that are type specimens. Note that searching for common (vernacular) names may not yield the expected results. Associating common names with specimen records is a work in progress. Keyword search example: marantaceae australia images.