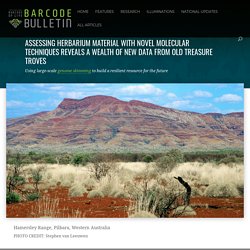 These plant materials are now also accessible to genetic studies because of advances in high-throughput, next-generation sequencing (NGS) methods. In our study, we conducted a large-scale applied assessment of one such NGS approach – genome skimming – and its ability to recover plastid and ribosomal genome sequences from a broad taxonomic sampling of herbarium material for the Western Australian flora. Developing a"Genetic Scorecard": A World-first for Scotland. Purpose The nature crisis is being recognised as a major global challenge equal to and interlinked with climate change. 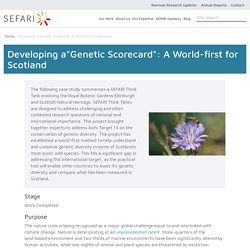 Nature is deteriorating at an unprecedented rate: three-quarters of the land-based environment and two-thirds of marine environments have been significantly altered by human activities; while one-eighth of animal and plant species are threatened by extinction. The UK, and Scotland, have signed up to several international conventions relating to the conservation of nature. One of the most significant of these is the Convention on Biological Diversity (CBD).

The CBD is concerned with the conservation of all the living organisms and, at a meeting in 2010 in Nagoya, Japan, they established a Strategic Plan for 2011-2020 with twenty global Aichi targets. Aichi Target thirteen (T13) focuses on the conservation of genetic diversity. Genetic diversity is essential for all species to thrive and to adapt to changing environments. Scots Pine in the Cairngorms National Park. Linking barcode sequence data from Barcode of Life to GBIF. DNA barcoding of the Arabian Peninsula flora. Kareem A. 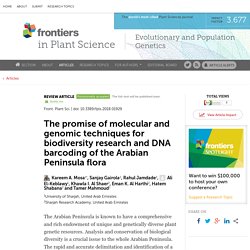 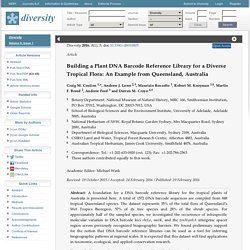 Introduction Tropical rain forests present unique challenges to identifying plant species. They are characteristically diverse, with an area as small as two hectares potentially containing 300+ vascular woody species of trees, shrubs, and lianas [1]. Many of these species can be extremely rare and/or poorly known [2] and often their most diagnostic characters for identification (e.g., leaves, fruit and flowers) occur high in the canopy out of sight and reach. In many cases fruits and/or flowers are required for accurate identification, which can hinder progress on identification of tropical species in remote localities for years or even decades.

Taxonomy, the scientific discipline of identifying and assigning names to species, may be one of the world’s oldest professions, yet today it is undoubtedly an uncommon trade. This project aims to construct a DNA barcode library for the tropical flora of Australia in collaboration with iBOL and the CCDB. Figure 1. 2. UK DNA Barcoding all plants. Ecologist and conservationist Dr Natasha de Vere talks to Tom Ireland about DNA barcoding every species of native flowering plant in the UK, and the crisis facing plant-pollinating insects around the world The Biologist 64(1) p22-25 In 2012, Wales became the first country in the world to DNA barcode every single one of its 1,143 native flowering plants. 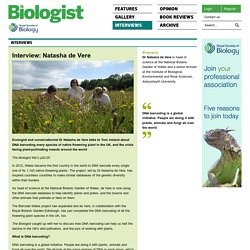 The project, led by Dr Natasha de Vere, has inspired countless countries to make similar databases of the genetic diversity within their borders. As head of science at the National Botanic Garden of Wales, de Vere is now using the DNA barcode database to help identify plants and pollen, and the insects and other animals that pollinate or feed on them. The Barcode Wales project has expanded and de Vere, in collaboration with the Royal Botanic Garden Edinburgh, has just completed the DNA barcoding of all the flowering plant species in the UK, too. 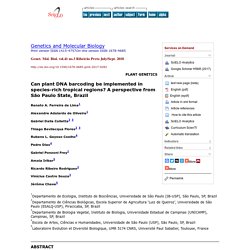 What plant is this? Scan the genomic barcode! Herbarium-Derived DNAs to Assemble a Large-Scale DNA Barcode Library. Fig. 1. 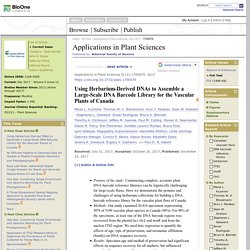 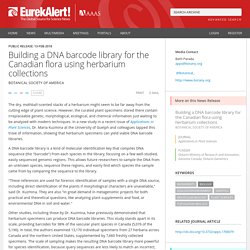 However, the curated plant specimens stored there contain irreplaceable genetic, morphological, ecological, and chemical information just waiting to be analyzed with modern techniques. In a new study in a recent issue of Applications in Plant Sciences, Dr. Maria Kuzmina at the University of Guelph and colleagues tapped this trove of information, showing that herbarium specimens can yield viable DNA barcode libraries. A DNA barcode library is a kind of molecular identification key that compiles DNA sequence (the "barcode") from each species in the library, focusing on a few well-studied, easily sequenced genomic regions. This allows future researchers to sample the DNA from an unknown species, sequence these regions, and easily find which species the sample came from by comparing the sequence to the library. Other studies, including those by Dr. As Dr. Genome skimming herbarium specimens for DNA barcoding and phylogenomics. 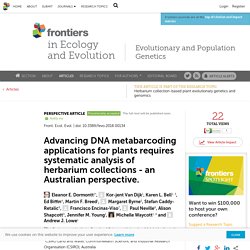