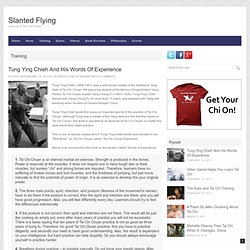 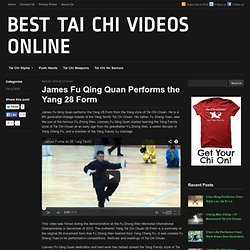 Below is an instructional DVD of the Yang Family Tai Chi 28 Form. If you enjoyed this wonderful Tai Chi Video, please click on the “Like” button! Comments comments. Kuo Lien Ying. Kuo Lien Ying, (1895–1984) born in Inner Mongolia, China, was one of the most distinguished and revered martial artists of the twentieth century. 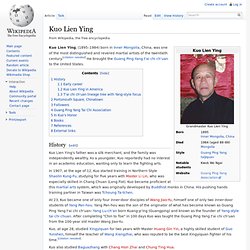 [citation needed] He brought the Guang Ping Yang t'ai chi ch'uan to the United States. History[edit] Kuo Lien Ying's father was a silk merchant, and the family was independently wealthy. As a youngster, Kuo reportedly had no interest in an academic education, wanting only to learn the fighting arts. In 1907, at the age of 12, Kuo started training in Northern Style Shaolin Kung-Fu, studying for five years with Master Li Lin, who was especially skilled in Chang Chuan (Long Fist). At 23, Kuo became one of only four inner-door disciples of Wang Jiao-Yu, himself one of only two inner-door students of Yang Pan-hou. Kuo, at age 28, studied Xingyiquan for two years with Master Huang Gin Yin, a highly skilled student of Guo Yunshen, himself the teacher of Wang Xiangzhai, who was reputed to be the best Xingyiquan fighter of his time.