A young woman struggles with oxy addiction and recovery. When her mom came to pick her up for drug court that morning, Stacy Nicholson was still high. 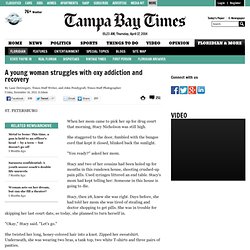 She staggered to the door, fumbled with the bungee cord that kept it closed, blinked back the sunlight. "You ready? " asked her mom. Finding Oscar: Massacre, Memory and Justice in Guatemala. Oscar Alfredo Ramírez Castañeda had plenty to lose. 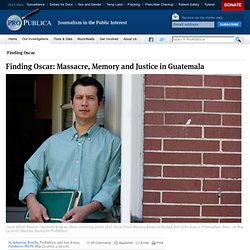 Although he was living in the United States illegally, the 31-year-old had built a solid life. He worked two full-time jobs to support his three children and their mother, Nidia. Navigating Love and Autism. What I never told anyone about her death - Mortifying Disclosures. Dead bodies do get a grayish blue/purple hue because blood pools in the capillaries and the body starts to decompose. 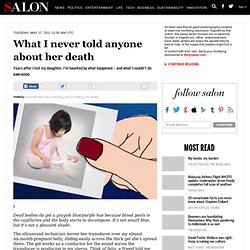 It’s not smurf blue, but it’s not a pleasant shade. The ultrasound technician moves her transducer over my almost six-month-pregnant belly, sliding easily across the thick gel she’s spread there. The gel works as a conductor for the sound waves the transducer is producing in my uterus. Think of bats, a friend told me before the procedure. It’s the same kind of sonar. “Do you want to know the sex?”

We’ve already agreed that we do want to know, even though I am already confident this baby is a girl. Pregnant in Putin's Russia - By Natalia Antonova. MOSCOW — "Russia needs babies" may as well be the unofficial slogan of Prime Minister Vladimir Putin's ruling United Russia Party. 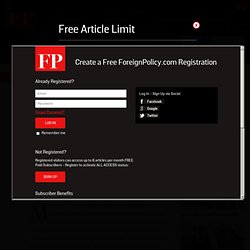 The country is in a demographic crisis, shedding 2.2 million people (or 1.6 percent of the population) since 2002, and the government is trying to encourage more women to bring Russian citizens into the world. This year, when I unexpectedly got pregnant soon after receiving my visa to work in Moscow, I became a test case. Since the Soviet days, having a baby in Russia has been commonly understood as a nightmare of understaffed state hospitals and forbidding bureaucratic mazes. Feminist author MariaArbatova's My Name Is Woman, an alternatively harrowing and hilarious account of childbirth in the 1970s, was the grim reality for many. Arbatova described being left completely unattended during the final stages of labor, which nearly resulted in her death and the death of her twin sons. Abortion saved my life.

There’s this lawmaker out of Kansas, Rep. 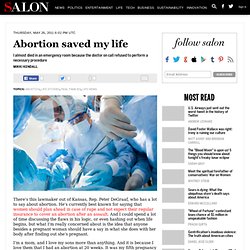 Peter DeGraaf, who has a lot to say about abortion. He’s currently best known for saying that women should plan ahead in case of rape and not expect their regular insurance to cover an abortion after an assault. And I could spend a lot of time discussing the flaws in his logic, or even hashing out when life begins, but what I’m really concerned about is the idea that anyone besides a pregnant woman should have a say in what she does with her body after finding out she’s pregnant. I’m a mom, and I love my sons more than anything. And it is because I love them that I had an abortion at 20 weeks. I was taking an afternoon nap when the hemorrhaging started while my toddler napped in his room when I woke up to find blood gushing upward from my body. Everyone knew the pregnancy wasn’t viable, that it couldn’t be viable given the amount of blood I was losing, but it still took hours for anyone at the hospital to do anything.

My stillborn child’s life after death. The official pronouncement of Thor’s death came an hour after his delivery, but I’d known he was dead since he’d come out without a pulse. 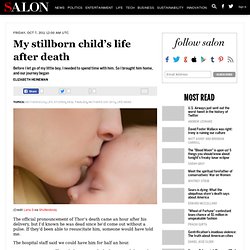 If they’d been able to resuscitate him, someone would have told me. The hospital staff said we could have him for half an hour. Once upon a time, stillborn babies were whisked away and the mothers didn’t see them. The child I lost. I became an adult at the age of 38 when I held my dead daughter in my arms. 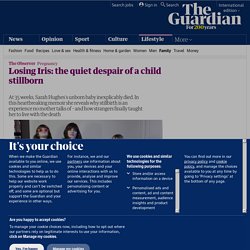 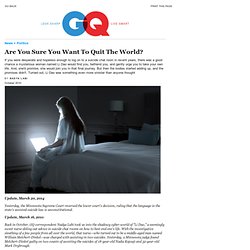 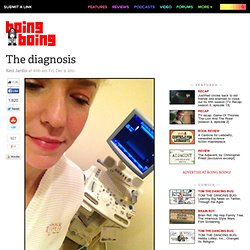 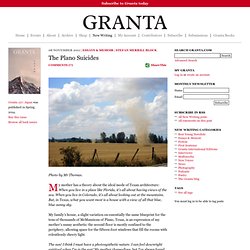 My mother has a theory about the ideal mode of Texan architecture: When you live in a place like Florida, it’s all about having views of the sea. When you live in Colorado, it’s all about looking out at the mountains. But, in Texas, what you want most is a house with a view of all that blue, blue sunny sky. My family’s house, a slight variation on essentially the same blueprint for the tens of thousands of McMansions of Plano, Texas, is an expression of my mother’s sunny aesthetic: the second floor is mostly confined to the periphery, allowing space for the fifteen-foot windows that fill the rooms with relentlessly cheery light.

The sun! Tyler Clementi’s Suicide and Dharun Ravi’s Trial. Dharun Ravi grew up in Plainsboro, New Jersey, in a large, modern house with wide expanses of wood flooring and a swimming pool out back. Assertive and athletic, he used “DHARUNISAWESOME” as a computer password and played on an Ultimate Frisbee team. At the time of his high-school graduation, in 2010, his parents bought space in the West Windsor and Plainsboro High School North yearbook. “Dear Dharun, It has been a pleasure watching you grow into a caring and responsible person,” the announcement said. “You are a wonderful son and brother. . . . In your sleep: 'If you have to die, this is a great way to go' It was the phrase "died peacefully in his sleep" that made me hesitate.

Only a few hours had passed since my 88-year-old father failed to wake on the morning of April 23. He was a stickler for accuracy, and not much on euphemisms, so I paused when writing that in his obituary. As a journalist, I try to avoid any details I can't verify. Did he die peacefully? Online Only. Photo by Random Letters. Perhaps because I was born in the middle of the night I never have really associated the hours of darkness with wasting my time in sleep – more with being up and about and ready, I sometimes think much more ready than I manage to be in the day.

Insomnia started early for me, but it wasn’t about not sleeping, it was about being full of other things, being too delighted to let go and drop away. I’m told that when I was little I would go to bed quite obediently, but then for a while I would sing – small person in under blankets and singing, happy to elongate the day and perhaps fond of music, I suppose, I’m not sure. I had no work to engage me, no social calendar, no pressing concerns, I only wanted to be me, with my own restless skin, just following along behind my thinking.

How Doctors Die « Zócalo Public Square. By Ken Murray| Years ago, Charlie, a highly respected orthopedist and a mentor of mine, found a lump in his stomach. He had a surgeon explore the area, and the diagnosis was pancreatic cancer. This surgeon was one of the best in the country. He had even invented a new procedure for this exact cancer that could triple a patient’s five-year-survival odds–from 5 percent to 15 percent–albeit with a poor quality of life. Things I have learnt from and about IVF. Encouraged by Belle & Tedra’s recent posts, and just loving Jim Henley’s recent comment: “I’d just like to say that all the ladyblogging about ladyparts and ladyissues only of interest to ladies around here lately has been awesome. I’m learning a lot from it”; I’m going to share some observations as I near the end of my third round of IVF.Embryos are not babies You might think someone so eager to have children as to undergo months of difficult and expensive treatment would have a hard-core view on embryos and babies.

Lisa Chase Parenting Advice: My Father’s Magical Parenting. Last year my mother died, and I became an orphan at 47. To paraphrase a friend, it was like the roof had flown off the house. Issue 3: Sex & Death - Orphans. Now That Books Mean Nothing. Dog Crazy. The doggy playgroup that gathers on weekday mornings in Fort Greene Park is not the healthiest scene to spy on if you are single, dogless, and lonely.

A Message from Prison. Wall of room in Ward Retreat 1 at St. Elizabeth's psychiatric hospital in Washington, D.C. Credit: the Otis Historical Archives National Museum of Health and Medicine. I received an email from a Department of Corrections social worker about four years ago. My dungeon shook. To My Old Master. The Throwaways. Will’s Choice. The Art of the Obituary. My Kasual Kountry Weekend With the Knights of the Ku Klux Klan.

What goes on in the mind of a sniper? 25 January 2012Last updated at 11:03 By Stephanie Hegarty BBC World Service A young cowboy from Texas who joined the elite US Navy Seals became the most deadly sniper in American history. In a book published this month he provides an unusual insight into the psychology of a soldier who waits, watches and kills. As US forces surged into Iraq in 2003, Chris Kyle was handed a sniper rifle and told to watch as a marine battalion entered an Iraqi town.

Not an Ike and Tina Thing. Interview With My Bully: When I confronted my bully about racism. The Long Goodbye - Features. Sick and Tired - February 8, 2012. How a routine jab sent me so mad I sobbed (and saluted) through the Royal Wedding - then became convinced I was the Messiah... Gray Area. Daddy Issues - Magazine. My Mother, My Daughter. My So-Called Ex-Gay Life. Pain Is A Gift, And Other Notes From A Terrified Father During A Seven-Week-Premature Birth.

Twenty Citizens' Worth Of Blood Flowed Through Him: A Medic Confronts The Open Wounds Of Afghanistan. Fresno. Susan Gubar's Closing Chapters - Faculty.