500 Women Scientists Who Inspire Us! Factbrowser - The Research Discovery Engine. Rediscovering Social Innovation. Social entrepreneurship and social enterprise have become popular rallying points for those trying to improve the world. 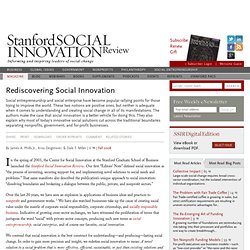 These two notions are positive ones, but neither is adequate when it comes to understanding and creating social change in all of its manifestations. Ask The Experts: What Is Social Innovation? Social innovation is one of those phrases that is in danger of becoming nearly meaningless due to its overuse, and use in such a wide variety of applications. 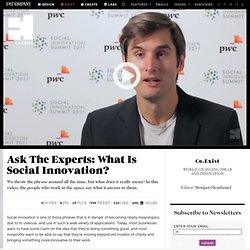 Today, most businesses want to have some claim on the idea that they’re doing something good, and most nonprofits want to be able to say that they’re moving beyond old models of charity and bringing something more innovative to their work. But what’s an actual definition of social innovation? That’s harder to come by. And without a definition, it’s hard to point at who is doing it well and who is doing it badly. At the 2011 Social Innovation Summit, PwC convened a variety of leaders in the field--including Charles Best from Donors Choose; Rahul Raj, Walmart.com’s director of sustainability; and Nancy Lublin, CEO of DoSomething.org--responded to the question: "What is social innovation? " This is a teaser of the various speakers, but stay tuned. Robert Putnam, social capital and civic community. Contents: introduction · life · the civic community · social capital · civic involvement – the Bowling Alone phenomenon ·social capital and social change · conclusion: putnam and informal education · further reading and references · links · how to cite this article Robert D Putnam (1941- ) has made some influential friends in recent years. 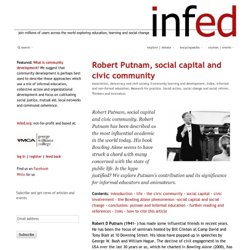 He has been the focus of seminars hosted by Bill Clinton at Camp David and Tony Blair at 10 Downing Street. His ideas have popped up in speeches by George W. Bush and William Hague. What is social innovation? WorkerTech: Fighting for better work through technology. Toby Baker works within Nesta's Policy and Research team. 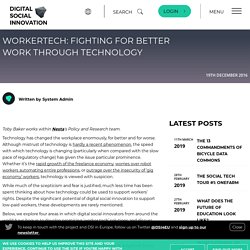 Technology has changed the workplace enormously, for better and for worse. Although mistrust of technology is hardly a recent phenomenon, the speed with which technology is changing (particularly when compared with the slow pace of regulatory change) has given the issue particular prominence. Whether it’s the rapid growth of the freelance economy, worries over robot workers automating entire professions, or outrage over the insecurity of ‘gig economy’ workers, technology is viewed with suspicion. While much of the scepticism and fear is justified, much less time has been spent thinking about how technology could be used to support workers’ rights. Despite the significant potential of digital social innovation to support low-paid workers, these developments are rarely mentioned. 1. When workers’ voices are united together, their message is amplified.

Its success stems from its impressive user base. Using mobile money services to reduce poverty and empower women. Lab Notes - January edition The January edition of Lab Notes brings together inspiring blogs, articles and other content for public sector and social innovators around the world, including new evidence on the impact on mobile money services in alleviating poverty in developing countries, and more... 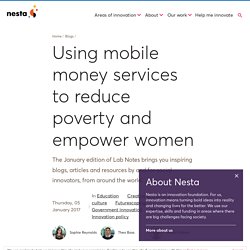 Time to strap on the Futurist Cap for some serious speculation. 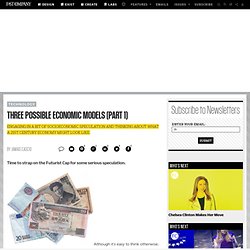 Although it's easy to think otherwise, the structure of the modern global economy is not terribly old, arguably dating back to the collapse of the gold standard in 1971, or the post-World War II "Bretton Woods" conference in 1944. Earlier versions of what we would nonetheless still call "capitalism" had very different degrees (and kinds) of government intervention, roles for labor and capital, even rules about currencies. Add to that the mention more extreme variants such as socialism and communism, corporatism (fascism), and the sundry experiments in anarchism, and you have quite a menagerie of all-but-extinct economic models. Speaking as a social futurist, not an economist, the three emerging conditions that ride high on my list of potential breaking points for the modern economy are as follows: All exaggerations, to be sure, but indicative of where trends seem to be heading. 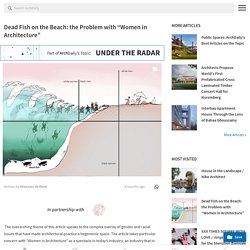 The article takes particular concern with “Women in Architecture” as a spectacle in today’s industry; an industry that in fact has an apparent and palpable lack thereof. In order to explain this complex issue that we suspect is ever present in other professions of the built environment, we shall describe the Architectural Place for professionals. Hegemony Beach: White men have and continue to sit on the soft sandy beach constantly breathing in the fresh air. And so black men sit swimming in the water, which might I mention looks refreshing and okay from the white man’s perspective, but is noticeably unsettling to the black man who still has the privilege of breathing fresh air whilst his feet remain soggy. Finally, we have black women (ah the familiar state I know so well).