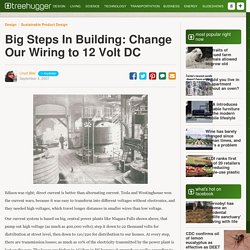 Tesla and Westinghouse won the current wars, because it was easy to transform into different voltages without electronics, and they needed high voltages, which travel longer distances in smaller wires than low voltage. Our current system is based on big, central power plants like Niagara Falls shown above, that pump out high voltage (as much as 400,000 volts), step it down to 22 thousand volts for distribution at street level, then down to 110/220 for distribution to our houses. At every step, there are transmission losses; as much as 10% of the electricity transmitted by the power plant is lost on the way. The losses are higher in AC than in DC because it grounds so easily; according to the Economist, DC distribution is far more efficient. (Treehugger here) And then we get to our homes and offices.... The Google boys, Sergei and Larry, think this is dumb too. UMISKY 6-Fach Sicherungshalter, ATO ATC 12V/24V KFZ Sicherungskasten Sicherungsdose Flachsicherung Blade mit LED-Anzeige Wasserdichte Schutzabdeckung für Auto Boat Marine Trike 32V: Amazon.de: Auto. 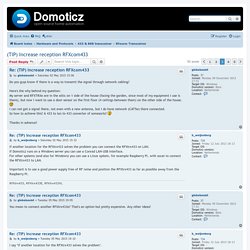 Make a 'curl' of electrical installationwire with a straight section corresponding to wavelength. Put it over the original antenna like shown on the picture [showing a TFA_Nexus PWS-console]. Principle of operation is inductive coupling between the add-on antenna and the original antenna of the receiver/transmitter. Shipping & Returns : ERE Company Limited. ME KTA-3 AS: Opbouw deurbelknop, 3-voudig, alu bei reichelt elektronik. Belknop voor 3 appartementen KTA3. 2019 Comparisons on Network, Wireless Comms, Security, Industrial. Using MQTT to connect Arduino to the Internet of Things. Recently I attended the AT&T Hackathon for Machine to Machine and Internet of Things. 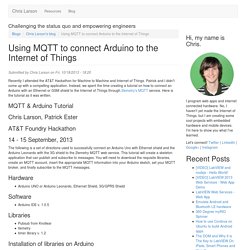 Patrick and I didn't come up with a compelling application. Instead, we spent the time creating a tutorial on how to connect an Arduino with an Ethernet or GSM shield to the Internet of Things through 2lemetry's MQTT service. Here is the tutorial as it was written. MQTT & Arduino Tutorial Chris Larson, Patrick Ester AT&T Foundry Hackathon 14 - 15 September, 2013 The following is a set of directions used to successfully connect an Arduino Uno with Ethernet shield and the Arduino Leonardo with the 3G shield to the 2lemetry MQTT web service. Hardware Arduino UNO or Arduino Leonardo, Ethernet Shield, 3G/GPRS Shield Software Arduino IDE v. 1.0.5 Libraries Pubsub from Knollear tlemetry timer library v. 1.2 Installation of libraries on Arduino For use with an Arduino Uno and the Ethernet shield, you will need the PubSubClient library ( The Pubsub library from Knolleary is nested in the “PubSubClient” folder.

LEXTRONIC. RFXCOM RFXtrx433E - Range test. This is the first experiences I had with the RFXtrx433E USB 433.92MHz Transceiver. 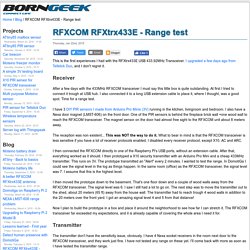 I upgraded a few days ago from Tellstick Duo, and I don't regret it. Receiver After a few days with the 433MHz RFXCOM transceiver I must say this little box is quite outstanding. Home Automation Domotica Forum Europe, Bwired Forum. Alarmkabel of beveiligingskabel voor alarmsystemen met draad. Lasdozen voor alarmsystemen. Schakelende voeding, tot 150 W bei reichelt elektronik. Wiring a model railroad part 1 : basic rules - Technical aspects of a model railroad. Ohm's law : U = R x I U : the voltage in Volts R : the resistor in Ohms I : the current in Ampères A conducting wire carrying an electric current (I) offer some resistance (R) to the current flow. 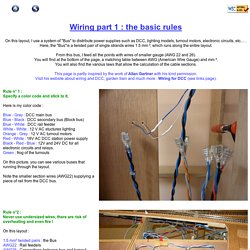 Introducing the contact resistance When you connect two wires together, or a Wire into a terminal, or two rails via a rail joiner, etc.. . . To reduce this resistance, we must : Solder the conductors to each other and use good quality connectors. Solid State Relays (SSR) - Temperature Control. Brewing beer with Python and a Raspberry Pi. I started brewing my own beer more than 10 years ago. Like most homebrewers, I started in my kitchen making extract-based brews. This required the least equipment and still resulted in really tasty beer. Eventually I stepped up to all-grain brewing using a big cooler for my mash tun. For several years I was brewing 5 gallons at a time, but brewing 10 gallons takes the same amount of time and effort (and only requires slightly larger equipment), so a few years ago I stepped it up.

After moving up to 10 gallons, I stumbled across StrangeBrew Elsinore and realized what I really needed to do was convert my whole system to be all-electric, and run it with a Raspberry Pi. There is a ton of great information available for building your own all-electric homebrew system, and most brewers start out at TheElectricBrewery.com. Hardware supplies Before I talked myself out of the project, I decided to start buying parts. Signaalkabel 6x0,8  -  elektrohandelsprijzen.nl. Tips voor de 12 Volt installatie.