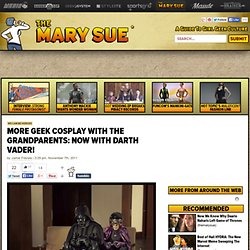 In this photo essay, Super Mamika and Mister Papkia take on the evil Sith Lord! By the way — has anyone seen Super Mamika? Look at these chums! It’s like they have nothing against each other at all. You know, you’d never think this could happen to Mister Papika with all those superpowers. Trying to out-Force each other. Looks like Mister Papkia has the upper hand in this one. Shave break. They are so meta! Okay, enough messing around — where is Super Mamika? No way … And that’s the end of this installment of The Adventures of Super Mamika and Mister Papika! (via Fashionably Geek) Previously in Sacha Goldberger Way to Cheer Up Your Grandma: A Superhero Photo Shoot. Garfunkel & Oates. Neil deGrasse Tyson is God. 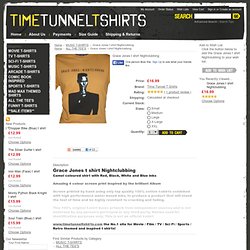 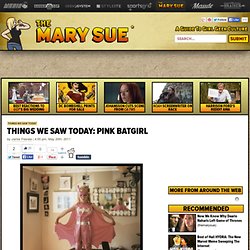 (At Fashionably Geek) Here is an easy way to catch up on the last six years of Doctor Who. Can you imagine a time when we didn’t have infographics? Would you even want to? I thought to myself “Haha, it’d be really funny if somebody followed some kid and his parents into a dark alley and then pretended to mug them after that show,” which I think means that I am a horrible person. We want you to check out all the things we see every day, but this item especially: After several young people committed suicide after being bullied last fall, comic writers Charles “Zan” Christensen and Mark Brill were inspired to write a comic about a bullied teen who becomes his own hero. Motionographer has an interview with one of the creative talents behind the Game of Thrones opening title sequence: I had a conversation two years ago with Carolyn Strauss, who we’ve done several main titles with at HBO. Melody Club - Girls Don't Always Wanna Have Fun Video av Melody Club - Myspace Video.

Photographer Turns his 91-Year Old Grandma into a Superhero to Cheer Her Up. A few years ago photographer Sacha Goldberger found his 91-year-old Hungarian grandmother Frederika feeling lonely and depressed. 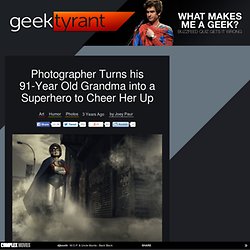 So to cheer her up, and put a spark back into her life, he turned her into a superhero! He took a series of awesome photographs of her wearing costumes in unusual superhero type posses. "Grandma reluctantly agreed, but once they got rolling, she couldn't stop smiling. " Frederika isn't only a superhero in these photos, but she was a real hero during World War II. Here's her story... Frederika was born in Budapest 20 years before World War II.

These photos are great, and they definitely put a smile on my face.