Arrow – FanAboutTown. ‘Arrow’ At 100: Stephen Amell On The Early Advice He Received After Getting Cast In CW Show When Stephen Amell was first cast as Oliver Queen in “Arrow,” he asked actors on “Private Practice” for some advice. 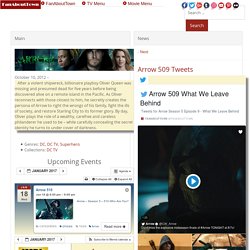 Did he take it? Then, the actor reflects on what it means to celebrate the “Arrow” 100th, and why he considers himself so fortunate. And finally, Stephen discusses wearing more suits recently on “Arrow.” Is he enjoying suiting up in a different way as Oliver serves as Star City Mayor? Invasion! Arrow | Invasion! Inside Arrow: Invasion! Arrow | Inside Arrow: Invasion! Heroes v Aliens – Behind The Scenes Arrow | Heroes v Aliens – Behind The Scenes | The CW ‘Arrow’: Why The 100th Episode Is A ‘Love Letter’ To Fans & The First Season DC Week Crossover – Melissa Benoist Interview Go behind the scenes of the 4 night crossover event with Supergirl’s Melissa Benoist! Arrow Cast. Season 1 Episodes. Season 2 Episodes. Season 3 Episodes. Season 4 Episodes. Arrow Recaps - Episode Guide TV EW.com. Quiverpodcast.com- Arrow (TV Series 2012– ) Arrow Archives. Arrow (TV series) Arrow is an American television series developed by writer/producers Greg Berlanti, Marc Guggenheim, and Andrew Kreisberg. 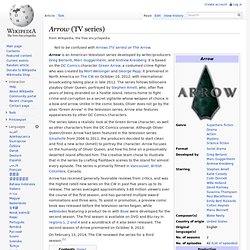 It is based on the DC Comics character Green Arrow, a costumed crime-fighter who was created by Mort Weisinger and George Papp. It premiered in North America on The CW on October 10, 2012, with international broadcasting taking place in late 2012. The series follows billionaire playboy Oliver Queen, portrayed by Stephen Amell, who, after five years of being stranded on a hostile island, returns home to fight crime and corruption as a secret vigilante whose weapon of choice is a bow and arrow.

Unlike in the comic books, Oliver does not go by the alias "Green Arrow" in the television series. Arrow also features appearances by other DC Comics characters. The series takes a realistic look at the Green Arrow character, as well as other characters from the DC Comics universe. On February 13, 2014, The CW renewed the series for a third season.[1] Arrow Episodes - Arrow Episode Guides - Watch Arrow Episodes from CW TVGuide.com. Arrow Series on the CW Network Official Site. 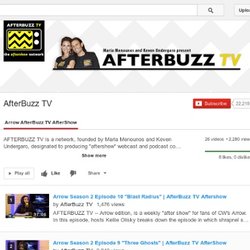 When fans finish watching their favorite programs (shows or movies), they can go online to watch or listen to an aftershow that features hosts, in a state of the art, multi-camera HD studio, breaking down everything they viewed, taking calls from fans worldwide and interviewing guests such as cast members, celebrities, show runners, etc. AFTERBUZZ TV - Arrow edition, is a weekly aftershow for fans of CW's "Arrow" that features hosts Kellie Olisky, Kaori Takee, Ann Campea, and Alikona Bradford.