Carcassonne Review. Over 387,932 Free Photos and Textures - FreeImages.com. Reinvented Dominoes Are More Addictive Than Candy Crush. Mobile games are great for passing time while you’re in line at the post office or enduring a long subway commute. 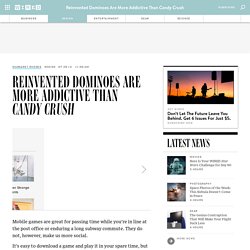 They do not, however, make us more social. It’s easy to download a game and play it in your spare time, but in doing so, we forfeit the conversations that happen during a good card game, says Victor Alemán. An industrial designer in Mexico City, Alemán wants to reclaim the social dynamic of games, so he’s invented his own—the Grid, a gorgeous set of wooden pieces resembling dominoes. Alemán initially wanted to make a sumptuous set of dominoes—those already exist—but then decided to craft a game that was slightly more involved. In dominoes, players match tiles to other tiles with the same number of dots (pips, in domino-speak). That’s all fun, but when Alemán and his design partners tested out an early prototype, they realized the game was too easy. Go Back to Top. Rock the Beat - with Tom Vasel. MagTV - Hamsterrolle. Jungle Speed. Bausack. Tumblin Dice Review - with the Chief. Hasbro Family Game Night - Sorry! Sliders JR RODRIGUEZ VS ALEX AKUMA RODRIGUEZ ON 03-01-11.

Subbuteo WorldCup 2013 GRAN FINAL. Abstract Board Games. Animal Upon Animal. The animals want to show how good they are at making tall pyramids! 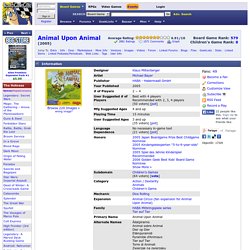 They must be skillfully careful: Who will position the penguin on top of the crocodile, the sheep on top of the penguin, the serpent on the sheep? The hedgehog wants to stand on top of the pyramid but the height is making him dizzy. Tier auf Tier (a.k.a. Animal Upon Animal, Pyramide d'animaux, and Dier op dier) is a simple stacking game, listed for ages 4-99, with 29 cute wooden animals. Board Game. Each player is a Gulo, or wolverine, trying to rescue a baby Gulo who got caught by the swamp vulture whose eggs it was trying to steal. 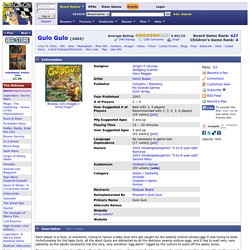 Unfortunately for the baby Gulo, all the adult Gulos are distracted by all the delicious swamp vulture eggs, and it has to wait very, very patiently as the adults constantly trip the very, very sensitive "egg alarm" rigged by the vulture to scare off the pesky Gulos. There is a nice wooden bowl filled with multicolored swamp vulture eggs of various sizes, into which a long thin dowel with another egg at one end is inserted, like a flagpole.

As you can imagine, lots of M&M Peanut-shaped wooden bits banging around together in a polished wooden bowl makes it rather difficult to keep a thin dowel with weight at the top balanced... Carrom Match Pierre Dubois VS Peter Boecker, Champions Trophy 2014. 2009 World Crokinole Championships - Finals 1/4. Board Game. Kingdom Builder. In Kingdom Builder, the players create their own kingdoms by skillfully building their settlements, aiming to earn the most gold at the end of the game. 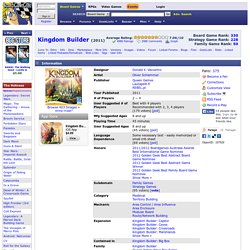 Nine different kinds of terrain are on the variable game board, including locations and castles. During his turn, a player plays his terrain card and builds three settlements on three hexes of this kind. If possible, a new settlement must be built next to one of that player’s existing settlements. When building next to a location, the player may seize an extra action tile that he may use from his next turn on. These extra actions allow extraordinary actions such as moving your settlements. Each game, players will use a random set of Kingdom Builder cards (3 of 10), special actions (4 of 8), and terrain sectors to build the map (4 of 8), ensuring you won't play the same game twice! Kingdom Builder FAQ - please read before posting questions in the forum. Alchemists. In Alchemists, two to four budding alchemists compete to discover the secrets of their mystical art. 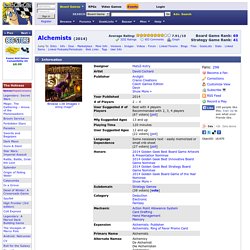 Points can be earned in various ways, but most points are earned by publishing theories – correct theories, that is — and therein lies the problem. The game is played in six rounds. At the beginning of the round, players choose their play order. Those who choose to play later get more rewards. Players declare all their actions by placing cubes on the various action spaces, then each action space is evaluated in order. During play, players' reputations will go up and down. Dead of Winter: Ashley Johnson, Grant Imahara, and Dodger Leigh Join Wil Wheaton on TableTop S03E08. Board Game. Forbidden Desert. Game description from the publisher: Gear up for a thrilling adventure to recover a legendary flying machine buried deep in the ruins of an ancient desert city. 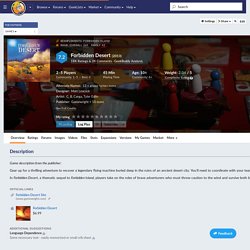 You'll need to coordinate with your teammates and use every available resource if you hope to survive the scorching heat and relentless sandstorm. Find the flying machine and escape before you all become permanent artifacts of the forbidden desert! In Forbidden Desert, a thematic sequel to Forbidden Island, players take on the roles of brave adventurers who must throw caution to the wind and survive both blistering heat and blustering sand in order to recover a legendary flying machine buried under an ancient desert city. While featuring cooperative gameplay similar to Forbidden Island, Forbidden Desert is a fresh new game based around an innovative set of mechanisms, such as an ever-shifting board, individual resource management, and a unique method for locating the flying machine parts. 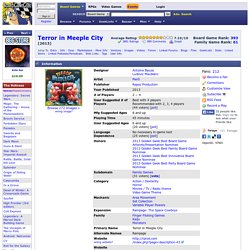 Your goal: Dig your claws and dirty paws into the asphalt, destroy buildings, and devour innocent meeples – in short: sow terror while having fun. Board Game. The "Stone Age" times were hard indeed. 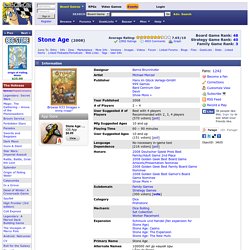 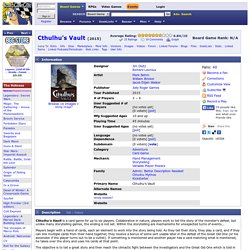 Collaborative in nature, players work to tell the story of the monster's defeat, but unlike many storytelling games, the ending is not set. Within the storytelling are mechanisms for unexpected turns of events... Players begin with a hand of cards, each an element to work into the story being told. As they tell their story, they play a card, and if they can link multiple cards from their hand together, they receive a bonus of some sort usable later in the defeat of the Great Old One (or his ascension if the player turns out to be a cultist). If something is mentioned and another player has a card matching what is mentioned, he takes over the story and uses his cards at that point. Bring Out Yer Dead. Board Game. Castle Panic. The forest is filled with all sorts of Monsters. 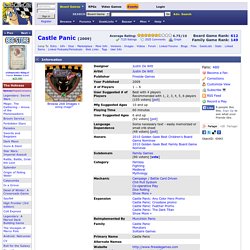 They watched and waited as you built your Castle and trained your soldiers, but now they’ve gathered their army and are marching out of the woods. Board Game. Granada, 1278. At the foot of the Sierra Nevada mountains, one of the most exciting and interesting project of the Spanish Middle Ages begins: the construction of the ALHAMBRA. Dungeon Petz. Become the leader of an imp family that has just started a new business – breeding and selling petz. Sound simple and safe? Well, we forgot to mention that those petz are for Dungeon Lords. This means magical, playful, sometimes angry monsters that constantly desire attention and at the very moment you want them to demonstrate their qualities to buyers they are sick or they poop. Sometimes you are even glad that you got rid of them – but the profit is unbelievable.

Galaxy Trucker. In a galaxy far, far away... they need sewer systems, too. Corporation Incorporated builds them. Everyone knows their drivers -- the brave men and women who fear no danger and would, if the pay was good enough, even fly through Hell. Now you can join them. You will gain access to prefabricated spaceship components cleverly made from sewer pipes. Can you build a space ship durable enough to weather storms of meteors? Of course you can. Galaxy Trucker is a tile laying game that plays out over two phases: building and flying. Board Game. Board Game. Board Game. The holiday-themed 12 Days takes the familiar "Twelve Days of Christmas" song and twists it into a quick-playing card game. Amazon.com: Qwirkle Board Game: Mindware: Toys & Games. Board Game. Board Game. Board Game. From the publisher: A beautiful and beautifully simple game of laying a tile before your own token to continue its path on each turn.

The goal is to keep your token on the board longer than anyone else's, but as the board fills up this becomes harder because there are fewer empty spaces left... and another player's tile may also extend your own path in a direction you'd rather not go. Easy to introduce to new players, Tsuro lasts a mere 15 minutes and actually does work for any number from 2 to 8. Theme: Board Game. Board Game. Inceptor - The Game of Your Dreams. Euphoria: Build a Better Dystopia. The 15 Best New Board Games of the Year. Board Game. Players in 30 Carats start with exactly the same items — a colored screen to hide their goods, five gemstones of each color in play, and five gold nuggets — but they won't stay the same for long!