NATO Slaughter: James and Joanne Moriarty expose the truth about what happened in Libya. Lost in a Roman wilderness of pain And all the children are insane - The End, The Doors It goes without saying that we rarely get an accurate representation of reality in the corporate media, which is, after all, what independent media exists for. 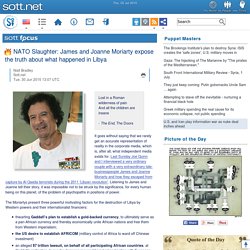 Last Sunday Joe Quinn and I interviewed a very ordinary couple with a very extraordinary tale: businesspeople James and Joanne Moriarty and how they escaped from capture by Al Qaeda terrorists during the 2011 'Libyan revolution'. Listening to James and Joanne tell their story, it was impossible not to be struck by the significance, for every human being on this planet, of the problem of psychopaths in positions of power. 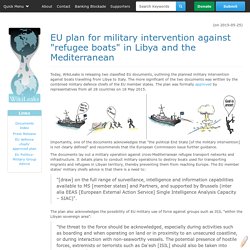 The more significant of the two documents was written by the combined military defence chiefs of the EU member states. The plan was formally approved by representatives from all 28 countries on 18 May 2015. Importantly, one of the documents acknowledges that "the political End State [of the military intervention] is not clearly defined" and recommends that the European Commission issue further guidance. The documents lay out a military operation against cross-Mediterranean refugee transport networks and infrastructure. "[draw] on the full range of surveillance, intelligence and information capabilities available to MS [member states] and Partners, and supported by Brussels (inter alia EEAS [European External Action Service] Single Intelligence Analysis Capacity – SIAC)".

Four Years After Gadhafi, Libya Is a Failed State Over Run by Terrorists. Mick Wallace discussing the disastrous intervention into Libya by Western Powers and Irish support. Libyan Archaeology Threatened by Years of Conflict. Tony Blair's grovelling letter to Colonel Gaddafi. Tony Blair sent letter to Gaddafi on official Downing Street-headed paperSaid he was disappointed courts blocked deportation of Libyan dissidentsThanked him for Libya's 'excellent co-operation' in attempt to return exilesRaises questions about Labour’s involvement in abuse of terror suspects By Ian Drury for the Daily Mail Published: 19:32 GMT, 23 January 2015 | Updated: 22:02 GMT, 23 January 2015 Tony Blair made a grovelling apology to Colonel Gaddafi for failing to send the tyrant’s enemies back to Libya to face torture, the Mail can reveal. 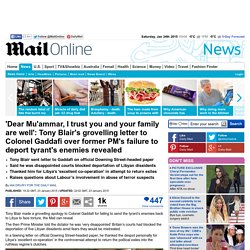 Egypt and Kuwait set up military alliance for Libya and Yemen. World Bulletin/News Desk Egypt, Saudi Arabia, United Arab Emirates and Kuwait are in the midst of preparing alliance to counter groups in Libya and Yemen who are arming themselves. 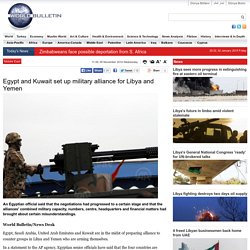 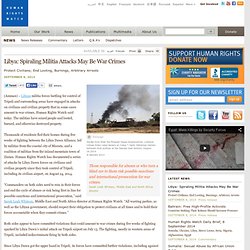 The militias have seized people and looted, burned, and otherwise destroyed property. Thousands of residents fled their homes during five weeks of fighting between the Libya Dawn Alliance, led by militias from the coastal city of Misrata, and a coalition of militias from the inland mountain town of Zintan. Human Rights Watch has documented a series of attacks by Libya Dawn forces on civilians and civilian property since they took control of Tripoli, including its civilian airport, on August 24, 2014. “Commanders on both sides need to rein in their forces and end the cycle of abuses or risk being first in line for possible sanctions and international prosecution,” said Sarah Leah Whitson, Middle East and North Africa director at Human Rights Watch. Ahmed Sanalla on Twitter: This is what used to be called #Tripoli International airport, set on fire by militias after 'liberating' it #Libya. 38 killed as Libyan forces battle militias in east. US bans flights into and over African war zones. 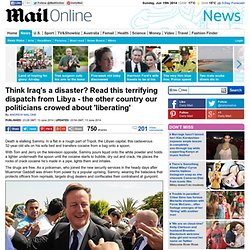 In a flat in a rough part of Tripoli, the Libyan capital, this cadaverous 32-year-old sits on his sofa bed and transfers cocaine from a bag onto a spoon. With Tom and Jerry on the television opposite, Sammy pours liquid onto the white powder and holds a lighter underneath the spoon until the cocaine starts to bubble, dry out and crack. He places the rocks of crack cocaine he’s made in a pipe, lights them and inhales. The drugs are free. Grandstanding: David Cameron accepts the plaudits of the Libyan crowd in Tripoli in 2011 He’s been using crack for five months.

This skeletal, depressive figure is not the Sammy I have known for the past three years — not the warm, friendly, family man who, along with thousands of others, risked his life to end the madness of Gaddafi’s 42-year-rule. But now, like the entire country, Sammy is falling apart. Murder is also on sale. A girl arrives. Libya: Interim Prime Minister Submits Resignation. Photo: Mohammed El Shaiky/Xinhua Libya has been in turmoil since the overthrow of late president Moammar Gadhafi (file photo). 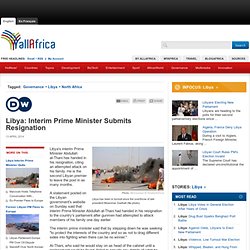 Libya's interim Prime Minister Abdullah al-Thani has handed in his resignation, citing an attempted attack on his family. He is the second Libyan premier to leave the post in as many months. A statement posted on the Libyan government's website on Sunday said that interim Prime Minister Abdullah al-Thani had handed in his resignation to the country's parliament after gunmen had attempted to attack members of his family one day earlier. Al-Qaeda flags raised in Eastern Libya. Government says proposal for return of monarchy not official policy as talks with rebels collapse Militants parade as they raise the Al-Qaeda flag in the city of Derna in Libya (Asharq Al-Awsat) 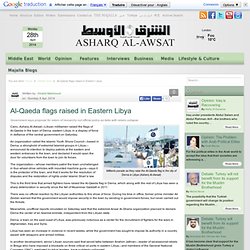 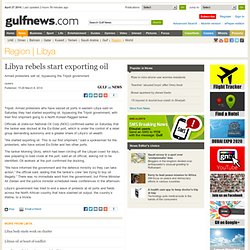 Officials at state-run National Oil Corp (NOC) confirmed earlier on Saturday that the tanker was docked at the Es-Sider port, which is under the control of a rebel group demanding autonomy and a greater share of Libya’s oil wealth. “We started exporting oil. This is our first shipment,” said a spokesman for the protesters, who have seized Es-Sider and two other ports. The tanker Morning Glory, which had been circling off the Libyan coast for days, was preparing to load crude at the port, said an oil official, asking not to be identified. NATO’s-war-on-Libya. Maximilian Forte, Slouching towards Sirte: NATO’s War on Libya and Africa,Baraka Books: Montreal, 2012, pp341 Maximilian Forte’s book on the Libyan War Slouching towards Sirte is another powerful (and hence marginalised) study of the imperial powers in violent action, with painful results. 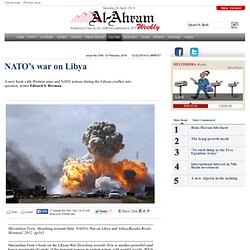 While the War was supported by the UN, the international media, various NGOs and a significant body of liberals and leftists who had persuaded themselves that this was a humanitarian enterprise, Forte shows compellingly that it wasn’t the least bit humanitarian, either in the intentions of its principals (the United States, France and Great Britain) or in its results. As in earlier cases of “humanitarian intervention” the Libyan programme rested intellectually and ideologically on a set of supposedly justifying events and threats that were fabricated, selective and/or otherwise misleading, but which were quickly institutionalised within the Western propaganda system.

Foreign Minister George Vella has urged EU foreign ministers to increase the EU's engagement with Libya and enhance the bloc's visibility in the country, adding that the emergence of extremist groups in the country is not only a concern to Libyans, but to Europe as well. Speaking at a meeting of the Foreign Affairs Council, Dr Vella reiterated Malta’s support and commitment to the Libyan people, which he conveyed to Prime Minister Ali Zeidan during the Libyan premier’s short stop in Malta last week. In this context, the Minister emphasized that the EU must “show the Libyan people that we are committed to their aspirations for a peaceful, democratic and prosperous future.” Turning to Syria, Dr Vella hailed the very fact that the long-awaited Geneva II Conference took place was an achievement, and he expressed Malta’s commitment to the next round of Geneva talks which began yesterday.