Vegan Caramel Apple Cobbler  I finally got my hands on some Minnesota grown apples. 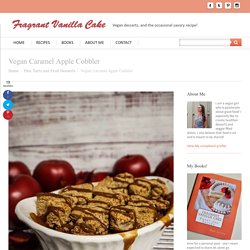 Although I love to just eat them, I really wanted to bake something with them as well. An apple pie sounded good, but then I also love crust-less things with a topping like an apple cobbler or apple crisp. I went with the cobbler, because I saw a caramel apple cobbler on Pinterest that wasn't vegan but sounded really good. Plus it is a bit easier to make than a whole pie and perfect for two people to enjoy! I don't think I have even made a cobbler since last year!

I didn't need much sweetener for mine, because the apples were already pretty sweet. Lastly when the cobbler was all bubbly and lovely coming from the oven I decided it needed some quick maple caramel so I topped it off with that. Vegan Caramel Apple Cobbler Serves 4 Ingredients: Fruit: Biscuit topping: Caramel: 2 Tbsp pecan butter or almond butter1 Tbsp maple syrup (or more if you need to thin it out more)pinch sea salt 6 inch wide ovenproof bowl or pie plate. 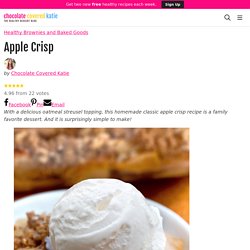 Easy Apple Crisp This is one of those basic desserts everyone should try, because it’s such a delicious recipe that will receive rave reviews from guests every single time you serve it. The traditional apple crisp recipe below was originally my grandmother’s, and it’s been one of our favorites that we’ve been making every year since as long as I can remember. Also Try These Easy Cinnamon Rolls – Just 4 Ingredients Apple Crumble Or Crisp? Fruit crisps or crumbles both include a layer of fruit on the bottom topped with a crumbly streusel made from flour, sugar, and butter. Originally crisps would contain oats while crumbles would not; however in modern times the two words can pretty much be used interchangeably. In contrast, an apple cobbler has a thicker batter resembling drop biscuits, dumplings, scones, or pie crust, with no oats. Leftover Oats? Serving Suggestions: Oat Milk Ice Cream. 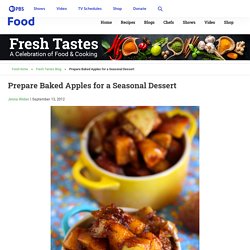 Theres just something so comforting about sweet, juicy baked apples with a hint of cinnamon. Sure, I love them with ice cream for dessert but you know my favorite way to enjoy this fall treat? With roast chicken or pork. Baked apples makes the perfect seasonal side-dish! This easy dish is a great way to use up all those apples you just picked, but be sure they are the right type of apple before you start chopping. You can also use baked cinnamon apples as an oatmeal topping or mixed into your morning Greek yogurt. This baked apples recipe with cinnamon makes a great side dish or dessert for a delicious Fall meal. Ingredients 2 lbs apples (either Cortland or Gala for best results), cored and chopped2 tsp cinnamonjuice of 1 lemon1/3 cup brown sugar Directions Preheat your oven to 375 degrees.

Yield: 4 servings Jenna Weber is half of the Fresh Tastes blog team. I love baked apples. Ingredients Directions Preheat your oven to 375 degrees. Healthfulpursuit. © 2020 Healthful Pursuit Inc. | Legal | Privacy Policy Third party links are often affiliate-based which means I receive a small percentage of the sale (at no extra cost to you). 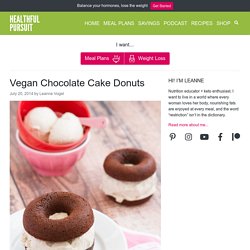 Thank you for all of your support! Leanne Vogel has experienced success in using her recipes and keto-based diet. It works with her lifestyle but there are no assurances or representations of any kind made by Leanne Vogel or Healthful Pursuit Inc. that you will attain any success in using the same recipes or adopting a keto-based diet. Healthful Pursuit provides information in respect to healthy living, recipes, nutrition, and diet and is intended for informational purposes only. Dollars to Doughnuts.

Name any day of the year, and I’ll tell you what food the calendar advises us to celebrate. 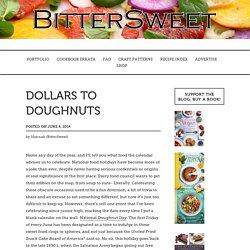 National food holidays have become more of a joke than ever, despite never having serious credentials or origins of real significance in the first place. Every food council wants to get their edibles on the map, from soup to nuts- Literally. Vegan Peanut Butter Chips. By now you know I have a mild obsession with peanut butter. 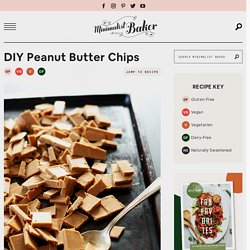 But this takes it to a whole new level. I’ve found a way to make peanut butter a melt-in-your-mouth baking chip! Plum Crisp with Almond Streusel – Vegalicious Recipes. We made a lovely plum compote from plums received as a gift. 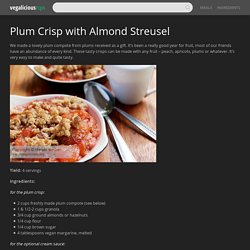 It’s been a really good year for fruit, most of our friends have an abundance of every kind. These tasty crisps can be made with any fruit – peach, apricots, plums or whatever. It’s very easy to make and quite tasty. Yield: 4 servings. Vegan "Flaky Donuts" with Blackberry-Cream Cheese Filling and Lemon Glaze - 40 Aprons. Vegan Sufganiyot (Jelly Doughnuts) With the holidays in full swing, I’m logging some serious kitchen hours. 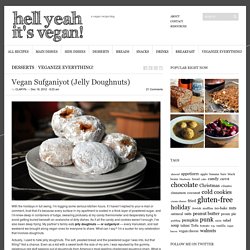 If I haven’t replied to your e-mail or comment, trust that it’s because every surface in my apartment is coated in a thick layer of powdered sugar, and I’m knee-deep in containers of fudge, swearing profusely at my candy thermometer and desperately trying to avoid getting buried beneath an avalanche of dirty dishes. As if all the candy and cookies weren’t enough, I’ve also been deep frying. Dairy-Free Vegan Whoopie Pies Recipe.