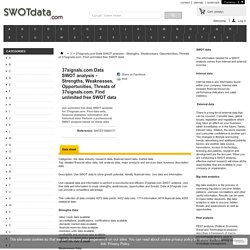 Identify financial risks. Use data and information. 37signals is one hell of a profitable business. [UPDATE]: Based on a number of comments below, via e-mail, and through additional research I’ve updated my original estimates. 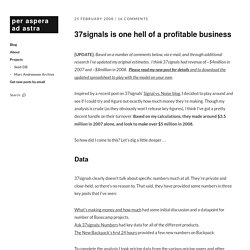 I think 37signals had revenue of ~$4million in 2007 and ~$8million in 2008. Please read my new post for details and to download the updated spreadsheet to play with the model on your own. Inspired by a recent post on 37signals’ Signal vs. Noise blog, I decided to play around and see if I could try and figure out exactly how much money they’re making. 10 Basecamp Alternative For Project Management You Must Try- Sprout24. No matter how much responsible you are about your work, you are bound to forget tasks at times. 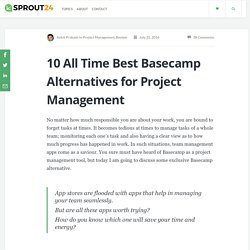 It becomes tedious at times to manage tasks of a whole team; monitoring each one’s task and also having a clear view as to how much progress has happened in work. In such situations, team management apps come as a saviour. How we structure our work and teams at Basecamp – Signal v. Noise. “How do you guys actually work? 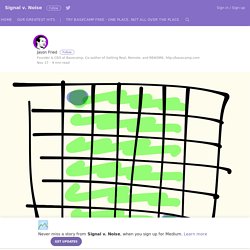 How do you choose what to do? How big are your teams? How do you structure the work itself” are questions I get all the time. Estimating 37signals revenue and general profitability. One of the all-time most popular posts on my blog is my original post where I showed how I modelled the revenue and revenue growth of 37signals. 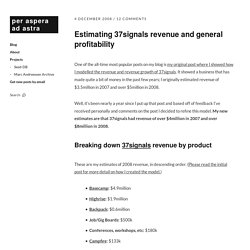 Breaking down 37signals revenue by product These are my estimates of 2008 revenue, in descending order. How we structure our work and teams at Basecamp – Signal v. Noise. List of countries by English-speaking population. Percentage of English speakers by country. 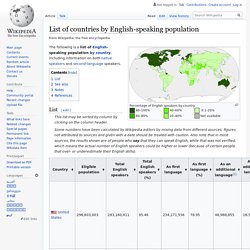 The following is a list of English-speaking population by country, including information on both native speakers and second-language speakers. List[edit] This list may be sorted by column by clicking on the column header. Some numbers have been calculated by Wikipedia editors by mixing data from different sources; figures not attributed to sources and given with a date should be treated with caution. The European Union is a supranational union composed of 28 member states. Pitch: Making a move a move – Basecamp. When I move something from one place to another I have a few expectations for how it'll work: It's no longer in the old place (If I wanted that I'd use copy)If I gave folks the old address, and they try to use it, it'd be nice if they were just pointed to the new placeIf I moved it out of someone's reach, to a place they can't access, they shouldn't be able to see it, or comment on it anymoreThe item's event history would reflect that it was moved here from elsewhere Because moving something actually means copying to a new location and then putting the old version in the trash, we're breaking expectations. 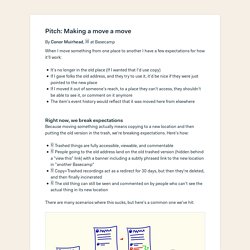 Here's how: The 9 Best Basecamp Alternatives. Update 10/13/15: This post has been updated with additional Basecamp alternatives that have proved themselves worthy over the past year and a half. 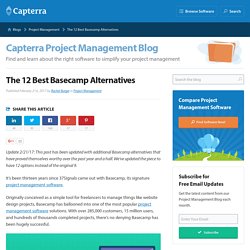 We’ve updated the piece to have 12 options instead of the original 9. It’s been ten years since 37Signals came out with Basecamp, their signature project management software. Originally conceived as a simple tool for freelancers to manage things like website design projects, Basecamp has ballooned into one of the (if not the, by some measures) most popular project management software solutions. Basecamp or Bust: Why 37signals Decided to Focus on Just One Product. A few months ago, I got into a heated debate with my business partner, David Heinemeier Hansson. 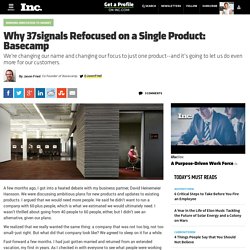 We were discussing ambitious plans for new products and updates to existing products. I argued that we would need more people. He said he didn't want to run a company with 60-plus people, which is what we estimated we would ultimately need. I wasn't thrilled about going from 40 people to 60 people, either, but I didn't see an alternative, given our plans. What is Basecamp's revenue as of March 2016? - Quora. How much money does 37signals make? - Quora. What is 37signals's annual revenue? - Quora.

How Basecamp grew from an internal project to generating millions in revenue. Web-hosted project management tool and eponymous startup Basecamp garners between 5,000 and 6,000 new clients—per week. 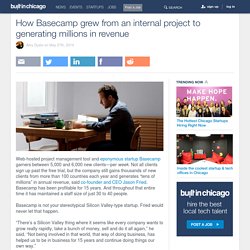 Not all clients sign up past the free trial, but the company still gains thousands of new clients from more than 100 countries each year and generates “tens of millions” in annual revenue, said co-founder and CEO Jason Fried. Basecamp has been profitable for 15 years. And throughout that entire time it has maintained a staff size of just 30 to 40 people. Basecamp is not your stereotypical Silicon Valley-type startup. Fried would never let that happen. Basecamp - Financial Report. PrivCo's Data Sourcing Methodology Finding information on private companies can be painful.

"Basecamp's Jason Fried aims to let 'great ideas set the course'". Chicago Tribune. Retrieved 19 September 2016. Jump up ^ Caplan, Jeremy (May 17, 2007). PRESS RELEASE: BASECAMP VALUATION TOPS $100 BILLION AFTER BOLD VC INVESTMENT. CHICAGO — December 1, 2015–Basecamp is now a $100 billion dollar company, according to a group of investors who have agreed to purchase 0.000000001% of the company in exchange for $1. Founder Jason Fried informed his employees about the new deal at a recent company-wide meeting. The financing round was led by Yardstick Capital and Institutionalized Venture Partners. In order to increase the value of the company, Basecamp has decided to stop generating revenue. The Small, Bootstrapped Multi-billion Dollar Company – Medium.

The Small, Bootstrapped Multi-billion Dollar Company This week, a project management software company Basecamp (formerly 37Signals) tweeted out that they opened 4 million projects in 2014. In their blog, books, and twitter, Basecamp has been a vocal advocate (some say too obsessed) of their culture of remote work, sane work life balance, and not taking venture capital. Many startups enthusiasts brush off Basecamp as this small company working on a simple to-do list tool. 37signalsrevenuemodel1 - Google Sheets. The next cycle: Blackburn (Sep 19 - Oct 28) – Basecamp. Hey all! Blackburn’s the next cycle and it runs from September 19th through October 28th. Thanks for putting up all the pitches - you'll see we'll be tackling some of them along with pieces of others, plus addressing some long standing frustrating issues that keep coming up.

Here's what's on the product development docket: ONBOARDING: , , and will continue the onboarding work that we started last cycle. This work involves the new Basecamp home screen split up by HQ/Teams/Projects, the new business model and trial tweaks, and related work. What's the Best Project Management Tool for Your Company in China?