Top Apps más descargadas en 2014 para Android #infografia #infographic #apps. There is less than a 1-in-27 million chance that Earth's record hot streak is natural. Although it may not have been warm where you live, scientists announced Friday that 2014 was the Earth's hottest year since record-keeping began in 1880. 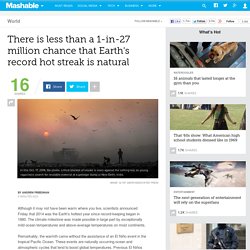 The climate milestone was made possible in large part by exceptionally mild ocean temperatures and above-average temperatures on most continents. Remarkably, the warmth came without the assistance of an El Niño event in the tropical Pacific Ocean. These events are naturally occurring ocean and atmospheric cycles that tend to boost global temperatures.

Previous El Niños have been responsible in part for the prior warmest years, such as 1998 and 2005, according to data from the National Oceanic and Atmospheric Administration (NOAA). The lack of an El Niño event indicates that such an event is no longer required to push the planet into a record warm year. Mark Anderson sur Twitter : "Revised Version of Bloom's Taxonomy questioning for Higher Thinking. The 20 biggest logo designs of 2014. On the day a new logo design is launched for a familiar brand, the first reactions are usually overwhelmingly negative. 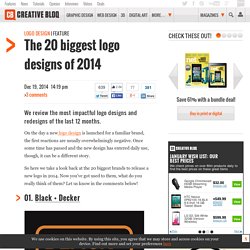 Once some time has passed and the new design has entered daily use, though, it can be a different story. So here we take a look back at the 20 biggest brands to release a new logo in 2014. Now you've got used to them, what do you really think of them? Let us know in the comments below! 01. 10 tips for improving your presentations & speeches. In September of this year, I was asked back to the TEDxKyoto stage to give a few words regarding tips from storytelling as they relate to modern presentations. 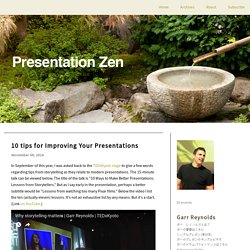 The 15-minute talk can be viewed below. The title of the talk is "10 Ways to Make Better Presentations: Lessons from Storytellers. " But as I say early in the presentation, perhaps a better subtitle would be "Lessons from watching too many Pixar films. " Below the video I list the ten (actually eleven) lessons. It's not an exhaustive list by any means. . (1) Turn off the computer.Most people open a computer and create an outline. . (2) Put the audience first. 10 tips for improving your presentations & speeches. 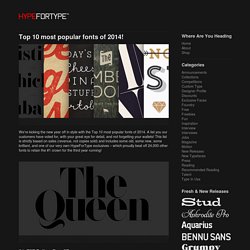 A list you our customers have voted for, with your great eye for detail, and not forgetting your wallets! This list is strictly based on sales (revenue, not copies sold) and includes some old, some new, some brilliant, and one of our very own HypeForType exclusives – which proudly beat off 24,000 other fonts to retain the #1 crown for the third year running! 01. The biggest security debacles of 2014 show that enterprises are still failing at the basics. As 2014 wraps, it’s safe to say that we have had some of the most publicized, devastating data breaches in years, including massive hacks on Target, JP Morgan Chase, and Sony. 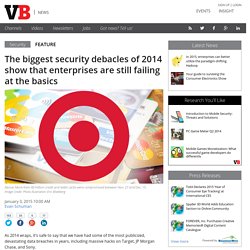 But as more details emerge about how those breaches happened, it’s becoming clear that better security software and larger IT security teams may not be the most cost-effective answer. The way those attacks happened underscores a need to get back to security basics. These attacks were not made possible by supercomputer-powered, password-cracking, firewall-busting systems. No, they were done in by a lack of focus on security fundamentals: changing passwords, limiting or monitoring contractor access, not letting access to one area become a key to a much more sensitive area, and so on. As one board member at multiple security companies phrased it: “We’re talking ‘Washing your hands before you eat’ kind of stuff for IT security.” Let’s drill into these three breaches and see what actually allowed the attackers in. Best Student Projects of 2014 - Udacity - Climb Higher.

Udacity students consistently amaze and inspire us with their motivation and creativity. 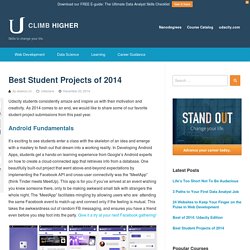 As 2014 comes to an end, we would like to share some of our favorite student project submissions from this past year. Android Fundamentals It’s exciting to see students enter a class with the skeleton of an idea and emerge with a mastery to flesh out that dream into a working reality. In Developing Android Apps, students get a hands-on learning experience from Google’s Android experts on how to create a cloud-connected app that retrieves info from a database. One beautifully built-out project that went above-and-beyond expectations by implementing the Facebook API and cross-user connectivity was the “MeetApp” (think Tinder meets MeetUp). Programming Foundations with Python. Best eLearning Resources of 2014. Top 5 Favorite Blog Posts of 2014. Best of 2014: Top 10 Still Life Photos. A great still life photograph takes meticulous planning and intense attention to detail. 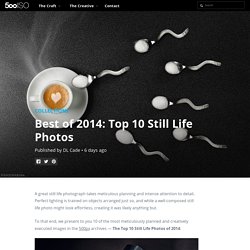 Perfect lighting is trained on objects arranged just so, and while a well-composed still life photo might look effortless, creating it was likely anything but. To that end, we present to you 10 of the most meticulously planned and creatively executed images in the 500px archives — The Top 10 Still Life Photos of 2014: For more great Still Life photography, click here to see all the images ever uploaded to the category arranged by Max Pulse, or check out the Still Life images that earned our guest curators’ praise on the Editors’ Choice page.

¿Qué películas reventaron la taquilla este 2014? Los 'selfies' del año: 101 autofotos de 2014. Top Education Stories of 2014: <i>Education Week</i>'s Most Viewed. 10 tips for improving your presentations & speeches. The Best Education Blogs of 2014. This blog is a summary of all the best educational blogs across the UK. 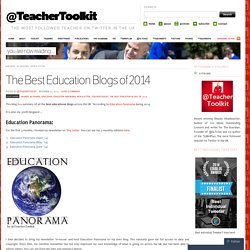 *According to Education Panorama during 2014. 12 best iPhone apps of 2014. The Most Popular Classroom Q & A Posts In 2014 - Classroom Q&A With Larry Ferlazzo. Top 10 Best Movie Performances. 12 best iPhone apps of 2014. 2014's most stunning science images - Holy Kaw! For all the bad news that’s flooded our feeds this year, on the flip side, it’s been a banner year for science. 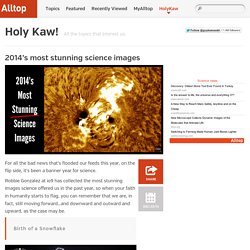 Robbie Gonzalez at io9 has collected the most stunning images science offered us in the past year, so when your faith in humanity starts to flag, you can remember that we are, in fact, still moving forward…and downward and outward and upward, as the case may be. Birth of a Snowflake One of the more technically creative time-lapses we’ve seen in a long while, Snowtime is a 2-minute “microscopic time-lapse” by Vyacheslav Ivanov that captures the mesmerizing bloom of budding ice crystals in all their hexagonal glory.Dreadnoughtus, a Newly Discovered Supermassive Dinosaur In September, a newly discovered dinosaur named Dreadnoughtus schrani laid claim to the title of world’s largest terrestrial animal, thanks to the recovery of its “exceptionally complete” remains from Southern Patagonia, Argentina by a team led by Drexel University paleontology Ken Lacovara. Snapshots of science. Log In. 14 of the Best Media Literacy Resources for 2014. The American Academy of Pediatrics (AAP) reports that children spend an average of seven hours a day consuming various types of media. 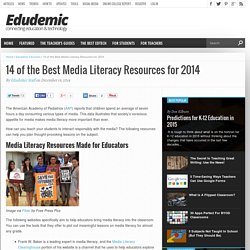 This data illustrates that society’s voracious appetite for media makes media literacy more important than ever. How can you teach your students to interact responsibly with the media? The following resources can help you plan thought-provoking lessons on the subject. Media Literacy Resources Made for Educators Image via Flickr by Free Press Pics The following websites specifically aim to help educators bring media literacy into the classroom. Frank W. Picks the Top 100 Photos of 2014. Top 10 Articles About Flipped Classrooms.

2inShare Flipped Classroom is one of the most popular trends in education nowadays, so I am sure most of you have heard about it. But do you know what exactly means the term ‘Flipped Classroom’ and what options it gives to teachers and learners? The concept seems simple but there’s a lot more to it than you think. We gathered for you 10 articles defining flipped classroom, showing different points of view on this new teaching method and there are also some tips for those of you who decide to flip the classroom. 1. To talk about the different aspects of a flipped classroom, first we have to understand what does it mean and what it is about this classroom that has been flipped that makes it unique. 2. Before introducing flipped classroom to students, teachers will have to get used to the new situation and learn how to make a student-centered classroom.

The app, which helps you improve memory and focus, was Apple's top pick of the year. The runner-up was Instagram's Hyperlapse, which speeds up shaky videos and turns them into time lapses in just two taps. Apple compiled its annual list of what it considers to be the year's most standout apps, with categories ranging from "best apps" to "best games. " Some notable inclusions are Yahoo News Digest, Facebook's Paper and the SwiftKey Keyboard app. With iOS 8, which debuted in September, Apple allowed iPhone users to pick alternative keyboard options from third-party developers; SwiftKey was quickly heralded as one of the best. Uber, which has come under a great deal of scrutiny over the past month for such things as "God view" and floating the notion of spending $1 million on digging up dirt on journalists, also appears on the list.

Here's the full list, below: App of the Year Image: Mashable, Christina Ascani. New Delhi Bans Uber Following Rape Accusation. Apple names its top apps of 2014; Uber makes the cut. It's a good day for Elevate, which was just named Apple's favorite app of 2014. The app, which helps you improve memory and focus, was Apple's top pick of the year. The runner-up was Instagram's Hyperlapse, which speeds up shaky videos and turns them into time lapses in just two taps. Apple compiled its annual list of what it considers to be the year's most standout apps, with categories ranging from "best apps" to "best games.

" Some notable inclusions are Yahoo News Digest, Facebook's Paper and the SwiftKey Keyboard app. With iOS 8, which debuted in September, Apple allowed iPhone users to pick alternative keyboard options from third-party developers; SwiftKey was quickly heralded as one of the best. Uber, which has come under a great deal of scrutiny over the past month for such things as "God view" and floating the notion of spending $1 million on digging up dirt on journalists, also appears on the list.

Here's the full list, below: 10 Most Controversial Topics For 2014. An infographic on the 10 most controversial topics for 2014. The year 2013 rolls by and now 2014 comes in with a promise. With that promise are some issues that will surely be tackled as the days come.