Of Mice and Men (1992 film) Based on Steinbeck's 1937 novella, the plot centers on George and the mentally disabled Lennie. 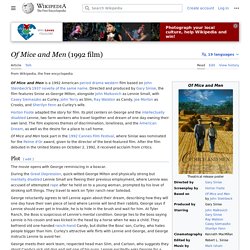 The two farm workers travel together and dream of one day owning their own land. With their work passes, the two end up on Tyler Ranch. George finds a property for sale, and calculates that they can buy the land at the end of the month with Candy's help. The film explores themes of discrimination, loneliness, and the American Dream. Of Mice and Men took part in the 1992 Cannes Film Festival, where Sinise was nominated for the Palme d'Or award, given to the director of the best-featured film.

Of Mice and Men: Steinbeck's Of Mice and Men. The novel opens with two men, George Milton and Lennie Small, walking to a nearby ranch where harvesting jobs are available. 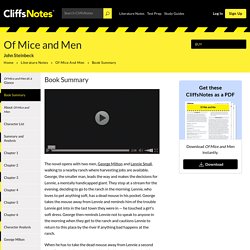 George, the smaller man, leads the way and makes the decisions for Lennie, a mentally handicapped giant. They stop at a stream for the evening, deciding to go to the ranch in the morning. Lennie, who loves to pet anything soft, has a dead mouse in his pocket. George takes the mouse away from Lennie and reminds him of the trouble Lennie got into in the last town they were in — he touched a girl's soft dress. George then reminds Lennie not to speak to anyone in the morning when they get to the ranch and cautions Lennie to return to this place by the river if anything bad happens at the ranch. Crooks. Crooks is so named because of a crooked back caused by a kick from a horse. 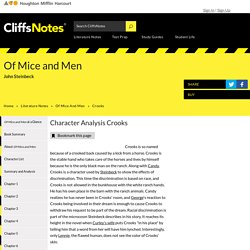 Crooks is the stable hand who takes care of the horses and lives by himself because he is the only black man on the ranch. Along with Candy, Crooks is a character used by Steinbeck to show the effects of discrimination. This time the discrimination is based on race, and Crooks is not allowed in the bunkhouse with the white ranch hands. He has his own place in the barn with the ranch animals. Slim. Slim is described always in terms of dignity and majesty. 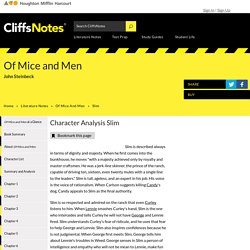 When he first comes into the bunkhouse, he moves "with a majesty achieved only by royalty and master craftsmen. He was a jerk-line skinner, the prince of the ranch, capable of driving ten, sixteen, even twenty mules with a single line to the leaders. " Slim is tall, ageless, and an expert in his job. His voice is the voice of rationalism. When Carlson suggests killing Candy's dog, Candy appeals to Slim as the final authority. Curley's Wife. Curley's wife, like the other players in the drama, is simply a character type and the only woman in the plot. 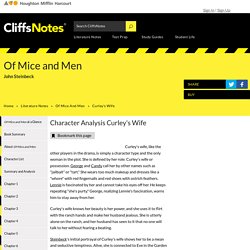 She is defined by her role: Curley's wife or possession. George and Candy call her by other names such as "jailbait" or "tart. " She wears too much makeup and dresses like a "whore" with red fingernails and red shoes with ostrich feathers. Curley. Curley, the boss' son, is an evil character in Steinbeck's world. 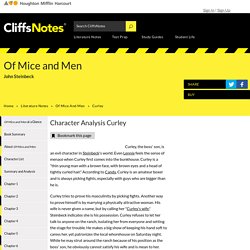 Even Lennie feels the sense of menace when Curley first comes into the bunkhouse. Curley is a "thin young man with a brown face, with brown eyes and a head of tightly curled hair. " Candy. Candy is "a tall, stoop-shouldered old man … . 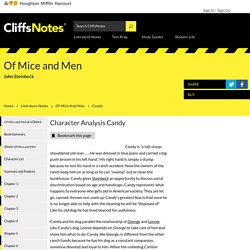 He was dressed in blue jeans and carried a big push-broom in his left hand. " His right hand is simply a stump because he lost his hand in a ranch accident. Lennie Small. Lennie Small is huge and lumbering and, in many ways, the opposite of George Milton. 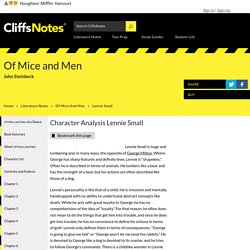 Where George has sharp features and definite lines, Lennie is "shapeless. " Often he is described in terms of animals. He lumbers like a bear and has the strength of a bear, but his actions are often described like those of a dog. George Milton. George is described as physically small with very sharp features, an opposite to Lennie Small. 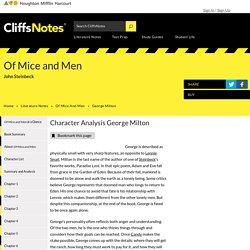 Milton is the last name of the author of one of Steinbeck's favorite works, Paradise Lost. In that epic poem, Adam and Eve fall from grace in the Garden of Eden. Because of their fall, mankind is doomed to be alone and walk the earth as a lonely being. Some critics believe George represents that doomed man who longs to return to Eden. Of Mice and Men: John Steinbeck Biography. Early Years John Ernst Steinbeck, Jr., was born on February 27, 1902, in Salinas, California, to a father, John Ernst Steinbeck, who had settled in California shortly after the Civil War, and a mother, Olive Hamilton Steinbeck, who was a public schoolteacher. 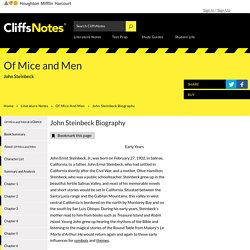 Steinbeck grew up in the beautiful, fertile Salinas Valley, and most of his memorable novels and short stories would be set in California. Situated between the Santa Lucia range and the Gabilan Mountains, this valley in west central California is bordered on the north by Monterey Bay and on the south by San Luis Obispo. Of Mice and Men: Context. John Steinbeck was born in 1902 in Salinas, California, a region that became the setting for much of his fiction, including Of Mice and Men.

As a teenager, he spent his summers working as a hired hand on neighboring ranches, where his experiences of rural California and its people impressed him deeply. In 1919, he enrolled at Stanford University, where he studied intermittently for the next six years before finally leaving without having earned a degree. For the next five years, he worked as a reporter and then as caretaker for a Lake Tahoe estate while he completed his first novel, an adventure story called Cup of Gold, which was published in 1929.

Stylistically, instead of concise sentences, he uses long sentences that have slow and languid feel. The beautiful, idealized scenery is a backdrop to the relationship between George, Lennie, and the other workers on the farm. The language Steinbeck uses in the opening scene is in stark contrast to the crass dialogue between the workers. Of Mice and Men by John Steinbeck - review. Of Mice and Men is a well-known classic, and with valid reason.

The book may seem rather boring (as many books about the Great Depression may seem) but it is actually a great tribute to literature. The book is about a man called George and his childlike, kind-hearted friend Lennie. John Steinbeck - Author. “A journey is a person in itself; no two are alike. And all plans, safeguards, policing, and coercion are fruitless. We find that after years of struggle that we do not take a trip; a trip takes us.” “In the souls of the people the grapes of wrath are filling and growing heavy, growing heavy for the vintage.” “Ideas are like rabbits. Of Mice and Men. GCSE Bitesize: Of Mice and Men. GCSE Bitesize: George Milton. GCSE Bitesize: Chapter 1. GCSE Bitesize: John Steinbeck.

GCSE Bitesize - Of Mice and Men.