GCSE Bitesize - Of Mice and Men 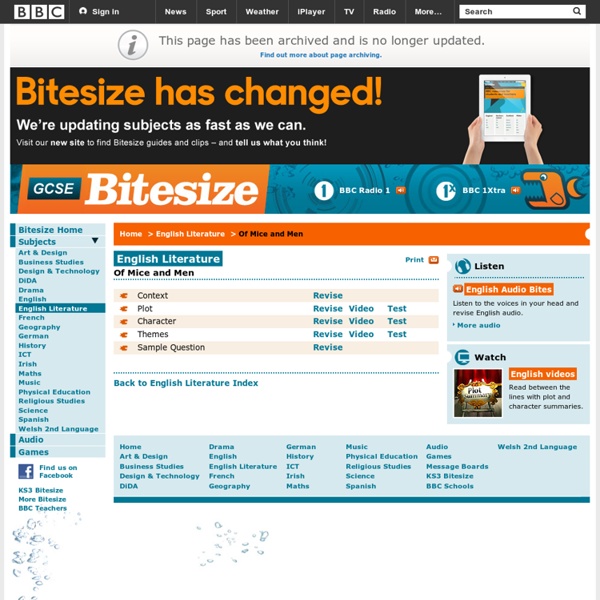 What Is the American Dream Today? By Kimberly Amadeo Before looking at what the American Dream is today, we need to look at its roots. It has always said that the government will protect your opportunity to improve your life, no matter who you are. That was established by the Declaration of Independence. It boldly proclaimed: "We hold these truths to be self-evident, that all men are created equal, that they are endowed by their Creator with certain unalienable Rights, that among these are Life, Liberty and the pursuit of Happiness.

The Dust Bowl Migration: Poverty Stories, Race Stories The Dust Bowl migration of the 1930s plays an important and complicated role in the way Americans talk about the history of poverty and public policy in their country. For almost seventy years the story of white families from Oklahoma and neighboring states making their way to California in the midst of the Great Depression has been kept alive by journalists and filmmakers, college teachers and museum curators, songwriters and novelists, and of course historians. Although it was but one episode out of many struggles with poverty during the 1930s, the Dust Bowl migration became something of synecdoche, the single most common image that later generations would use to memorialize the hardships of that decade.

Of Mice and Men Of Mice and Men is a novella[1][2] written by Nobel Prize-winning author John Steinbeck. Published in 1937, it tells the story of George Milton and Lennie Small, two displaced migrant ranch workers, who move from place to place in search of new job opportunities during the Great Depression in California, United States. Based on Steinbeck's own experiences as a bindlestiff in the 1920s (before the arrival of the Okies he would vividly describe in The Grapes of Wrath), the title is taken from Robert Burns' poem "To a Mouse", which read: "The best laid schemes o' mice an' men / Gang aft agley." (The best laid schemes of mice and men / Often go awry.) Required reading in many schools,[3] Of Mice and Men has been a frequent target of censors for vulgarity and what some consider offensive and racist language; consequently, it appears on the American Library Association's list of the Most Challenged Books of 21st Century.[4]

How the World Perceives the New American Dream The American dream has always been global. In 1931, when the historian James Truslow Adams first introduced the concept, he credited the dream with having “lured tens of millions of all nations to our shores.” Yet in recent years, a troubling gap has developed between this original dream and a new one that speaks far less eloquently to the rest of the world. The original dream has three strands. The first is about prosperity: the classic saga of penniless strivers working hard to lift their families into the middle class.

Race During the Great Depression - American Memory Timeline- Classroom Presentation The problems of the Great Depression affected virtually every group of Americans. No group was harder hit than African Americans, however. By 1932, approximately half of black Americans were out of work. In some Northern cities, whites called for blacks to be fired from any jobs as long as there were whites out of work. Racial violence again became more common, especially in the South. Lynchings, which had declined to eight in 1932, surged to 28 in 1933. John Steinbeck American writer John Ernst Steinbeck Jr. (; February 27, 1902 – December 20, 1968) was an American author and the 1962 Nobel Prize in Literature winner "for his realistic and imaginative writings, combining as they do sympathetic humour and keen social perception."[2] He has been called "a giant of American letters,"[3] and many of his works are considered classics of Western literature.[4] Most of Steinbeck's work is set in central California, particularly in the Salinas Valley and the California Coast Ranges region.

Mother killed herself and daughter in car fire A single mother who was the focus of a sustained campaign of abuse from a gang of youths killed herself and her teenage daughter by setting her car on fire, an inquest heard yesterday. Fiona Pilkington, 38, committed suicide in October 2007 by parking in a lay-by in South Leicestershire with her daughter, Francecca, 18, dousing the back seat in petrol before setting it alight with both women still inside. The fumes in the car caused an explosion, destroying the Austin Maestro and killing Ms Pilkington, who was in the driver's seat next to her daughter. The pair had to be identified by matching DNA samples taken from relatives with swabs recovered from the scene. The inquest, held yesterday at Loughborough Town Hall, heard that Ms Pilkington and her two children had been targeted by a gang of 16 youths that carried out a string of abuse to their home in Bardon Road, Barwell.

Of Mice and Men: Context John Steinbeck was born in 1902 in Salinas, California, a region that became the setting for much of his fiction, including Of Mice and Men. As a teenager, he spent his summers working as a hired hand on neighboring ranches, where his experiences of rural California and its people impressed him deeply. In 1919, he enrolled at Stanford University, where he studied intermittently for the next six years before finally leaving without having earned a degree. For the next five years, he worked as a reporter and then as caretaker for a Lake Tahoe estate while he completed his first novel, an adventure story called Cup of Gold, which was published in 1929.

The Great Depression - Facts & Summary Hoover, a Republican who had formerly served as U.S. secretary of commerce, believed that government should not directly intervene in the economy, and that it did not have the responsibility to create jobs or provide economic relief for its citizens. In 1932, however, with the country mired in the depths of the Great Depression and some 15 million people (more than 20 percent of the U.S. population at the time) unemployed, Democrat Franklin D. Roosevelt won an overwhelming victory in the presidential election.

Disability Social History Project - Timeline "Freak Shows" in the United States (1840-1940) How'd You Like to be a Giant? For one hundred years (1840 - 1940) the freak show was one of America's most popular forms of entertainment. Today the same shows would be considered unacceptable and cruel, or as one disability rights activist put it, "the pornography of disability." Of Mice and Men: Plot Overview Two migrant workers, George and Lennie, have been let off a bus miles away from the California farm where they are due to start work. George is a small, dark man with “sharp, strong features.” Lennie, his companion, is his opposite, a giant of a man with a “shapeless” face.

Surviving the Dust Bowl . American Experience . WGBH Schedule Shop About the Series 15 Things You Might Not Know About 'Of Mice and Men' You probably spent some time as a teenager reading John Steinbeck’s novella Of Mice and Men. Even if you know about Lennie and George’s heartbreaking pursuit of life, liberty, and a hutch full of rabbits, there are a few things you might have missed about the iconic story during English class. Although he was a Stanford University graduate and had published five books by the time he wrote Of Mice and Men, Steinbeck had more in common with his itinerant main characters than readers might have expected.