Projects. Human. NOTE: PLEASE DIRECT ALL HELP / SUPPORT REQUESTS TO THE GRASSHOPPER MESSAGE BOARD GROUP AT - POSTS HERE AND DIRECT EMAILS ARE LIKELY TO BE IGNORED Welcome to Human for Grasshopper! 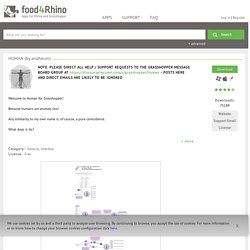 Because humans are animals too! Any similarity to my own name is, of course, a pure coincidence. What does it do? There are two sets of components with different functions: Human.gha Extends Grasshopper's ability to create and reference geometry including lights, blocks, and text objects. 4D Noise. This component creates Perlin and Simplex noise. 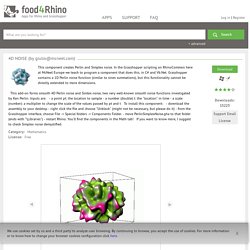 In the Grasshopper scripting on RhinoCommon here at McNeel Europe we teach to program a component that does this, in C# and Vb.Net. Grasshopper contains a 1D Perlin noise function (similar to sines summations), but this functionality cannot be directly extended to more dimensions. ClusterTools. Download: ClusterTools 0.29 Tutorial: Cluster Tools examples Overview: 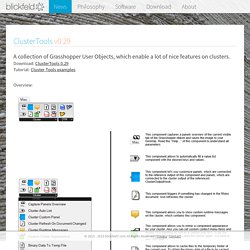 FabTools. Bowerbird. BBWaffle: Creates a waffle structure from a volume. The component can handle multiple holes and is very fast! Surface Voronoi. Voronax_GH. This is a Grasshopper Component based on our existing eVe | voronax plug-in for Rhino. 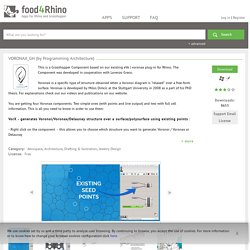 The Component was developed in cooperation with Lorenzo Greco. Voronax is a specific type of structure obtained when a Voronoi diagram is “relaxed” over a free-form surface. Voronax is developed by Milos Dimcic at the Stuttgart University in 2008 as a part of his PhD thesis. 2018 in a nutshell and the plans for 2019! - announcements - Ladybug Tools. Getting Started With Ladybug. 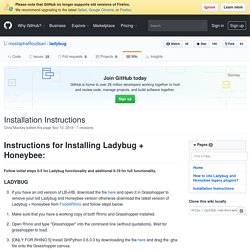 Food4Rhino. Give your eyes a break while you work all night! 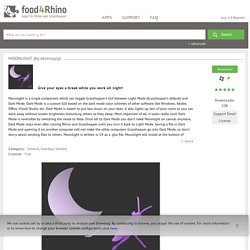 Moonlight is a single component which can toggle Grasshopper's GUI between Light Mode (Grasshopper's default) and Dark Mode. Dark Mode is a custom GUI based on the dark mode color schemes of other software like Windows, Adobe, Office, Visual Studio ect. Dark Mode is meant to put less strain on your eyes. It also lights up less of your room so you can work away without screen brightness disturbing others as they sleep. Most important of all, it looks really cool! Release Bowerbird 0.6.3 · oberbichler/Bowerbird. Bowerbird - Grasshopper. Cocoon – bespoke geometry. Cocoon is an add-on to McNeel’s Grasshopper visual scripting interface for Rhinoceros. 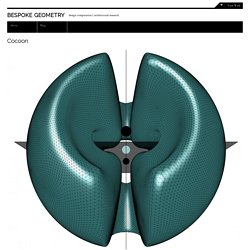 Cocoon is a fairly straightforward implementation of the Marching Cubes algorithm for turning iso-surfaces into polygonal meshes. It is geared specifically toward wrapping existing geometric elements, and works with combinations of points, breps and curves, allowing users to vary a number of parameters that enhance sculptural potentials. It is still rough (and there are definitely a number of other approaches to level sets and isosurfacing that are faster, more robust, more elegant, and/or have more potential) but due to time constraints related to other work I am doing – now and into the near future – I thought it effective and fun enough that it was worth it to make this available to the community.

As such, though, general caveats apply: it’s probably easy to break, and it will definitely generate some artifacts. Blog – bespoke geometry. Stressed Skins was an installation designed and fabricated by the Centre for Information Technology and Architecture (CITA) as part of its ongoing Complex Modelling project. 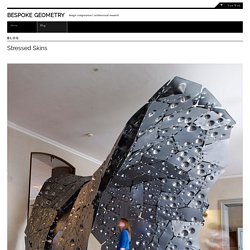 The installation design and fabrication processes were motivated by a number of interrelated research interests. The first of these was the investigation of multi-scalar modelling techniques and an aim to better understand their potentials within the discipline of architectural design modelling for generative, analytical, and fabrication-related processes. The potentials of a multi-scalar modelling approach explored here apply to the computation of specific material properties in the context of experimental structural systems and digitally-driven production processes. Fundamental to these interests was the development and implementation of a method for managing data structures within and across the multiple models required for each stage of the supply-chain, from concept to build. ThePipe - Geometry Exchange. ThePipe is a platform intended to provide real-time geometry exchange between different design and modeling applications, or different instances of the same application. 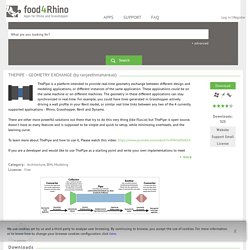 These applications could be on the same machine or on different machines. The geometry in these different applications can stay synchronized in real-time. For example, you could have lines generated in Grasshopper actively driving a wall profile in your Revit model, or similar real time links between any two of the 4 currently supported applications - Rhino, Grasshopper, Revit and Dynamo. There are other more powerful solutions out there that try to do this very thing (like Flux.io) but ThePipe is open source, doesn't have as many features and is supposed to be simple and quick to setup, while minimizing overheads, and the learning curve. ThePipe - Geometry Exchange. Food4Rhino. As a grasshopper user with previous programming experience, I often found myself restricted in ways I can organize the data in a Grasshopper definition. 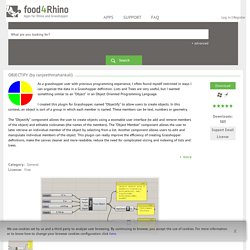 Lists and Trees are very useful, but I wanted something similar to an “Object” in an Object Oriented Programming Language. I created this plugin for Grasshopper, named “Objectify” to allow users to create objects. Human UI. Human UI is a new interface paradigm for Grasshopper. Create professional looking Grasshopper apps with custom user interfaces without writing any code. Human UI is an open source project. It was originally developed at NBBJ by the Design Computation Leadership Team over the course of about 10 months in 2015-2016. Ladybug Tools. G3D RapidBuild Build Supports for 3D Printing. Translate Earth Coordinates.

Pufferfish. The Pufferfish is one of few animals which is capable of changing its shape. This plugin is a set of 188 components which focuses on Tweens, Blends, Morphs, Averages, Transformations, & Interpolations - essentially Shape Changing. Pufferfish manily uses parameters and factors for inputs for more custom control over operations like tweens and grids as opposed to grasshoppers usual division count inputs. These components are accompanied by support components which are useful methods for the preparation of tween/blend operations such as making polylines compatible and matching surface structures. In addition, there are extra components which simplify some common grasshopper operations such as testing for equality within a tolerance and rounding to nearest numbers. Please email me if you find any bugs to help make this toolset better. Grasshopper-App. FlexHopper. Geodesic lines on meshes (MeshPaths)

Pufferfish. Telepathy. Complex definitions can quickly become a mess of wires. Using the wireless options on inputs can obfuscate connections and is pretty inflexible if you want to swap out components. Furthermore, everyone has experienced the pain of trying to connect two components that are very far away from each other on the canvas. Let's be honest -- it's not great. NBBJ digital presents: TelepathyCredits Marc Syp // Concept + Prototype Andrew Heumann // Rockstar Production Coder. MeshEdit. Shortest Walk Gh. Shortest Walk Gh. Mosquito - Media 4 Grasshopper. Mosquito is a plugin suite developed for Rhino and Grasshopper. The plugin allows us to tap into social , financial and popular media. Extracting location, buildings, roads, OpenStreetMap data, profiles, images and messages from Facebook,Twitter, etc…. As architects part of our responsibility is the consideration of the public realm.

Today however , people tend to hang in the digital equivalent, namely, social media space. While this space becomes ever more permanent, the physical realm is fleeting, an evanescent space. With mobile tech at our disposal, both digital and physical are the same space. FacadeHub. Firehopper. NGon.

Flusur. Flusur. Cove.tool. The cove.tool plugin exports the basic building geometry from your Rhino model, uploads it to an existing cove.tool project, and reports the Energy Use Intensity (EUI) breakdown. Cove.tool licenses are free for students and educators. Please contact hello@covetool.com with an .edu email address to get free access. Installation: DIVA for Rhino. MeshEdit. Pufferfish. Bifocals. Bifocals NBBJ Digital Practice is happy to release Bifocals, ending the age-old debate of Icon Display vs.