Pickin’: Learn a Beautiful Open-G Guitar Arrangement of “Sally Ann” – Acoustic Guitar. From the March/April 2021 issue of Acoustic Guitar | By Alan Barnosky Browsing a local North Carolina record shop a few years ago, I came across an intriguing used LP. 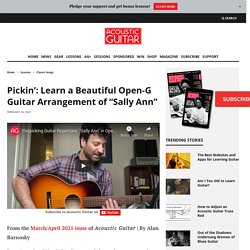 It had a worn cover, hand-drawn artwork, and text in a top corner that read DUDLEY HILL—GUITAR. I brought it home and immediately became hooked. The playing was warm, melodic, and thoughtful. It did not show off flashy guitar licks or fingerboard acrobatics, just joyful and effortless musicianship. Largely unknown outside of his home region, Dudley Hill was a beloved guitarist in the Pacific Northwest. Stuck in a Rut With Your Guitar? Try These Practice Techniques – Acoustic Guitar. Free Online Guitar Lessons – Country Guitar Online. Want To Pick Fast On Guitar? Stop Using Alternate Picking. By Tom Hess There is a simple guitar technique that makes your playing 33% more efficient than alternate picking. 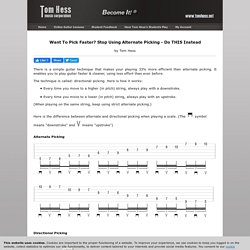 It enables you to play guitar faster & cleaner, using less effort than ever before. The technique is called: directional picking. Here is how it works: Appalachian People, Culture, and History - ROBERT SEPEHR. First Television Special On Bluegrass/Mountain Musicians -1965. Plucked from obscurity: why bluegrass is making a comeback. You could tell Punch Brothers didn’t expect to win a Grammy this year – their frontman didn’t even turn up. 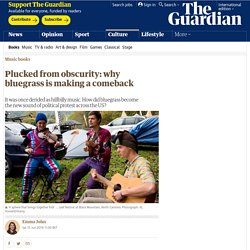 Bluegrass doesn’t, historically, make much of a splash at the awards, and this year they were up against the renowned Joan Baez in the folk category. But something in their album, All Ashore, had caught the zeitgeist. And it was probably their song about Donald Trump Jr. Bluegrass has no history of protest music. Or rather, its protest has always been a passive, melancholic one, the sound of displaced workers longing for their home in the Blue Ridge Mountains far away. In 1929, Bill Monroe left his home in Kentucky and headed north: he was 17 years old, and an orphan.

The three brothers had played music together as boys, and their skills proved popular. The Life and Times of Joe Thompson. About Kyle. Kyle—The Individual Robert Andy Kyle Creed (September 20, 1912 – November 26, 1982) has been referred to as “A Legendary Old-Time Musician.” 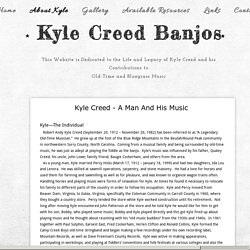 He grew up at the foot of the Blue Ridge Mountains in the Beulah/Round Peak community in northwestern Surry County, North Carolina. Coming from a musical family and being surrounded by old-time music, he was just as adept at playing the fiddle as the banjo. Kyle Creed-Liberty (Full Album) Top 25 Best Bluegrass Flatpicking Guitarists - The Guitar Journal. Mybanjoworld. Bluegrass & Clawhammer vs TRADITIONAL Banjo. Banjo Resources. Clawhammer banjo players are probably the luckiest of the lot in finding learning materials online. 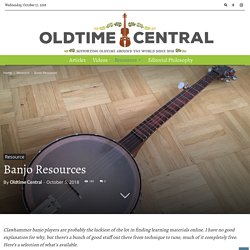 I have no good explanation for why, but there’s a bunch of good stuff out there from technique to tune, much of it completely free. Here’s a selection of what’s available. 1Hilarie Burhans YouTube Channel. Keeping Old Time. If in the last ten years your travels have brought you through Asheville, North Carolina, you will have noticed something odd: for such a small town (pop. 85,700), Asheville has a disproportionate number of street musicians. 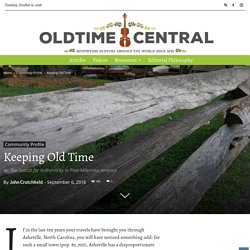 Many of these are quite awful—typically a man aged 30 to 50, with a broken harmonica or a guitar he hasn’t bothered (or doesn’t know how) to tune, playing a classic rock cover. Or else strumming/blowing more or less doggedly, in the hopes of eventually remembering the chords to a classic rock cover. Or perhaps simply trying to stave off whatever demons lurk about in the shadows of a bad trip––which might actually be the subject of the classic rock cover whose chords our man is hoping to remember.

Be that as it may, the end result is not always pleasant to hear. Bill Evans Tells the History of the Banjo in 14 Minutes. Open Back Banjo Building - In Depth Step by Step Course to Build a. Gourd Banjos: From Africa to the Appalachians - BanjoHistory.com. African Gourd Instruments Musical instruments made from gourds have been found in many cultures. 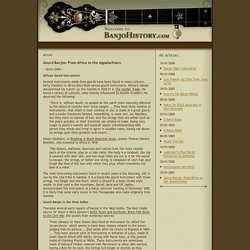 Early travelers in Africa described various gourd instruments. Richard Jobson documented his travels up the Gambia in 1620-21 in The Golden Trade. He found a variety of cultures, some heavily influenced by Muslim invaders. He observed the following: "There is, without doubt, no people on the earth more naturally affected to the sound of musicke then these people ... Eileen Southern, in Readings in Black American Music, quotes Thomas Edward Bowdich, who traveled to Africa in 1819: "The Mosees, Mallowas, Bournous and natives from the more remote parts of the interior, play on a rude violin: the body is a calabash, the top is covered with deer skin, and two large holes are cut in it for the sound to escape; the strings, or rather one string, is composed of cow's hair, and broad like that of the bow with which they play, which resembles the bow of a violin. 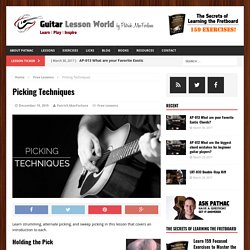 Holding the Pick Always point the pick directly down towards the guitarDo not allow it to spin while pickingMake sure your grip is comfortableMake sure you have a firm gripRest your forearm on the guitar for stability and comfort Strumming Everyone who plays a guitar learns how to strum, which is simply playing multiple strings with one downward or upward movement.

Although this seems like a simple movement, it takes time for a beginner to learn. Strumming Problem-solving Tips If you are having strumming problems, my first tip is to use thin picks. How to Practice Strumming Practice downstrokes with a metronome for timing. Strumming Symbols Downstrokes and upstrokes are sometimes provided on a piece of music. Quarter Note Strumming.